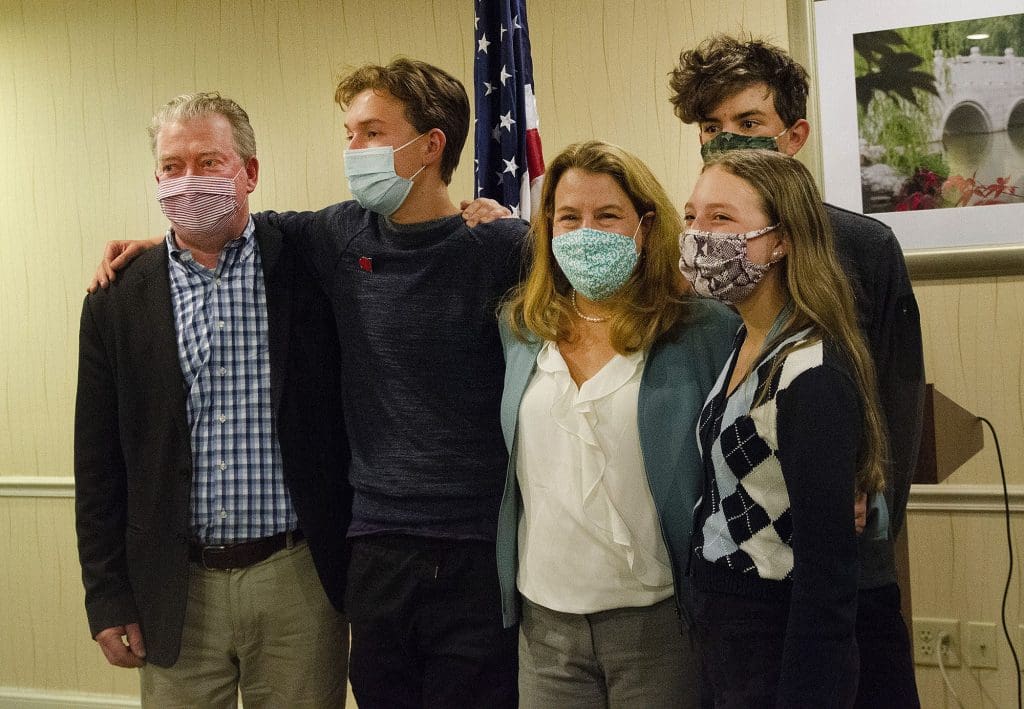 Election Day is over. Some votes have yet to be counted.

Dathan’s statement said, “We’ve listened to you and your voices, and we are bolstered by your overwhelming support. The numbers have given us the vote of confidence to move forward to a healthier, safer, and brighter future for all residents of the 142nd, and I am so heartened to have the honor of serving you for two more years.”

“I congratulate Lucy on her re-election victory and wish her the very best for the future,” Wilms wrote.

Dathan unseated Wilms two years ago in the traditionally Republican district, which he had represented for four years. Wilms, a Norwalk resident, succeeded longtime State Rep. Larry Cafero. Dathan, a resident of the New Canaan side of Silvermine, is a relative newcomer to Connecticut.

Wilms and Dathan differed in their approach to campaigning, as Dathan announced shortly before the election that she would suspend door knocking because of the COVID-19 spike and Norwalk’s red alert status. At the time, Dathan told Democrats that she felt voters were nervous when she came to their doors, even if she was 10 feet away.

Dathan’s speech to Democrats, late Tuesday on Zoom, featured her offering respect for counting every vote but saying, “I feel like things are going right. And I think you know, we should be optimistic. And so I’m very pleased to say that and to carry on for another two years to represent you.”

Afterwards, she released a statement:

“In the end, campaigning ‘in the new normal’ wasn’t so different from years past.

It required more Zoom, face masks, and hand sanitizer but I still was able, with the support of my amazing volunteers, to engage with much of our community on a deep level. There is nothing I love more about this job than connecting with the residents of Norwalk and New Canaan. It is such a privilege to serve each and every one of you in the 142nd District. I am indebted to my family for their unflagging support and to my campaign team who saw the numerous COVID-19 challenges as simply opportunities to find creative solutions.

“Together, we have accomplished so much that many thought impossible back in March.  Together, we found hope and faith despite tragedy and hardship. Joe Biden and Kamala Harris talk about what ‘building back better’ looks like. I know what this means first-hand because together that is just what we have done these last two years in Hartford, and that is what we are doing now as a community facing this pandemic. Now, more than ever, we need to have a strong voice in our state legislature that will work hard to protect key rights, especially as many of them are likely to be threatened by a realigned Supreme Court.

“Though I’m optimistic about the results, every vote counts and it is important we honor our democratic process. I hope to be a safeguard against egregious Federal policies. And at a more local level, we need to continue to push for quality, affordable healthcare while addressing our current public health crisis; fully fund education, and work to resolve the State’s financial troubles . As we look to the years ahead, we must find ways to move forward and not backward. Together, we need to keep this state moving forward. I am up for the task. Whether you voted for me or not, I hope you’ll join me. I am everyone’s representative and I endeavor to earn every constituents’ respect through my continued dedication to the district. It is an honor to take on this work with and for you.”

Although I don’t always agree with Lucy she does her best and shows up for 142nd…Good Luck and please don’t spend our money too fast.

Note to Chris Perone: Lucy is willing to drive you to Hartford. That’s one less excuse for your less than stellar attendance record.