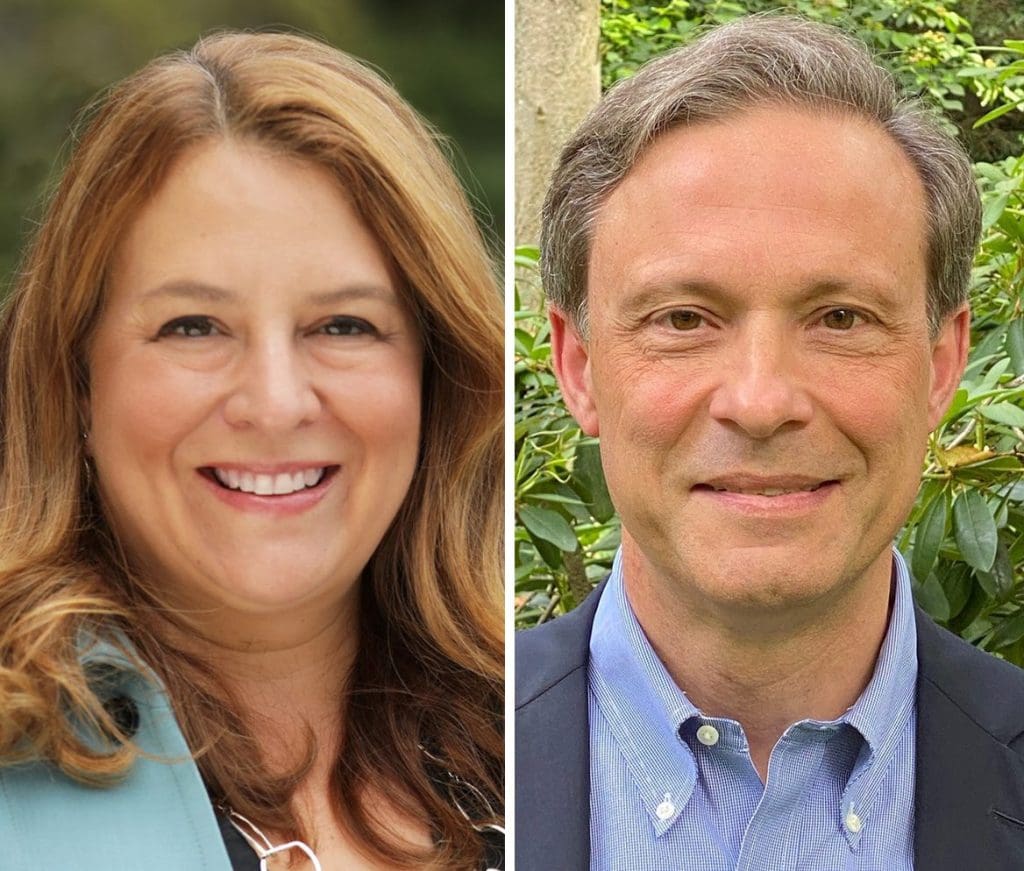 Wilms is a quitter, Dathan said at the League of Women Voters of New Canaan forum. Dathan has voted to raid the transportation funds, Wilms said.

Dathan took the seat from Wilms two years ago, in a district that has been Republican for decades. The New Canaan event was the first debate for the pair. They meet again Thursday in a League of Women Voters of Norwalk forum.

On Monday, Wilms and Dathan both said they oppose regionalizing schools. They both said Eversource had been held accountable for the power outages due to Tropical Storm Isaias, though Wilms added that the Eversource CEO should have resigned, and Dathan said cable companies should also face consequences.

Wilms accused Dathan of voting with her party 97 percent of the time; Dathan said 90 percent of bills are passed on a bipartisan basis.

“In essence, I voted more times against my own party than with my own party when it came to the differentials,” she said.

Both candidates said they support healthcare, but Dathan accused Wilms of voting for a bill in 2018 that would have taken away coverage for pre-existing conditions and made health insurance more expensive.

Dathan mentioned early that she supports tolls as a user fee for people using Connecticut’s highways.

“The fact is that the current budget did take money that was scheduled to go to the transportation fund,” Wilms said. “And there were increases that were scheduled to go there and they were diverted away.”

Wilms spoke of Connecticut’s fiscal issues, alleging that “state employees get compensation is about 20 or 25 percent greater than what they would earn in the private sector.”

“Fred, I have to question your level of commitment. The day after you lost the election in 2018, you chose to resign your seat on the pension sustainability commission,” Dathan said, calling it an appointed seat not connected to his role as a State Representative. “Connecticut does not need quitters.”

Wilms called that a backhanded compliment.

“I was the only Republican selected to be on that pension sustainability commission,” he said. “After the election where all the Republicans here lost, and we lost our voting capability in Hartford, it turns out that that Commission produced absolutely none of the recommendations that we were working on because the political dynamic had changed.”

He pointed out that she’s been endorsed by the Working Families Party, “which to me is a huge red flag, because they are the creatures of the state employee unions.”

“The Commission was just at the crux of coming up with final solutions when Fred decided to quit,” Dathan said. “And my feeling is we need people who are going to be dedicated to solving the state’s problems, dedicated to having their voices heard, and dedicated to being sure that they are representative of their district.”

The League’s moderator asked what could be done to make Connecticut more business friendly.

Wilms countered, “The first thing we need to do is get our state finances in order. companies don’t want to move to a state that has a one to $2 million structural deficit every single year.”

He touted his work on a 2017 “Republican budget, which became the bipartisan budget that did not raise taxes, built up the rainy day fund, that loosely referred to that’s not going to go to $3 billion.”

“The GOP budget, it claims that there’s no increase on tax, but actually there was 1.5 billion in  new revenue taxes,” Dathan replied. “It increased property taxes on cars by the elimination of the motor vehicle … mill rate cap, it also increased business taxes, eliminated the angel investor tax credit, which will incentivize new businesses, and it eliminates the tax deduction for utilities. Plus, it was a hard hit on education.”

“The budget that Lucy voted for just last year, raised taxes by $1.7 billion dollars,” Wilms said. “And you know, what really disappointed me was there was really no attempt made by the Governor or by the Democrats in Hartford to try to achieve cost savings or any kind of structural changes, they just went right for the tax increase.”

Lucy Dathan thinks the state is doing well financially because Moody’s gave Connecticut a favorable rating because of our raining day fund.

That’s why CT will never make any progress towards fiscal solvency if we continue to elect Democrats. They are not willing to do the hard work it will take to reform CT to prosperity, so they try to hide the problem and double down on tax and spend. Tolls are another bad idea that will not fix infrastructure and make CT a lot less business and family-friendly.

I am 10 to 15 years away from retirement and I have 3 young adult children, unless we reform CT, I will not be able to retire here and my kids will have limited job prospects, will never be able to afford living here, and will be straddled with the state’s enormous debt and unfunded liabilities. These issues and real and dire for CT families.

As you read this you realize more and more that Datham is not even close to the caliber representative Norwalk and this State sorely needs. I would like to say nice try Lucy but given the horrible financial conditions out state is in the experiment didn’t work, Fred will be taking his seat back because we need his expertise, knowledge and experience to get our financial house in order and begin to repair you and the rest of the 1 Party rule have done,

I’m disappointed that Dems will still not admit the raiding of the Transportation Fund..They’ve balanced the budget for years by Transportation “slight of hand” as well as misappropriating hospital payments (which we now have to pay back) Regarding Transportaion Fund diversion semantics – It sounds like someone preparing for a career in Used Car Sales. I’ve attached a link which describes the process.

Without watching this whole thing, no one asked Dathan if she approved of the 5% pay raises given to a shut down government?

No one asked her, why we were legally obliged to give these $350 million in raises, when we’ve learned that the Governor can do whatever he wants to do with a pen-stroke?

Thanks to the pandemic and thanks to her abdicating that responsibility to the Governor 4 months after the curve had been flattened our economy is one of the slowest recovering covid hit economies in the free world. Others who decided to get theirs up and running have far lower death rates (ours is still 4th highest in the country) and are going to widen the gap on CT big time in the next year. The priority instead was the war on police, ballot harvesting, and a new NHS no one asked for. Not governing again. Not getting our economy going again.

Anyone who knows Fred, knows he is not a quitter. hopefully she quits before we fall off the cliff of insane spending and warped priorities.

It took years for CT to get into a financial mess, and Fred was at the helm during the height of it. I only recently started voting Dem, as previously thought they spent and didn’t invest. Not true with Dathan. For anyone on the fence, look at the real voting records as I did. Fred twists the truth. I want someone who is straight and has the capability to get the job done. Dathan is highly committed, and we are lucky she is in this role. Her financial experience far outweighs Fred’s, who seems in this more for reclaiming a title than for putting the effort in to make change happen. Norwalk and New Canaan need someone working hard for them, and Lucy rolls her sleeves up.

Blaming Fred who was in Hartford for 4 years in a minority caucus with barely any say for the Democrats driving this state from #1 to #49 is the height of ignorance.

Oh, and still not one surrogate to go to bat for Lucy’s bill to put women’s hygiene products into boys bathrooms. Estimates of this unfunded mandate are $250,000 for Norwalk alone. What would she propose NPS cut to fund this? School safety officers? Bus monitors? If elected, will she push forward on this bill and what other unfunded mandates does she have up her sleeve before we’ve had any chance to recover economically from the shutdowns she supports?

For ‘Meek’, aren’t you the campaign manager of Wilms? Your passion can be commnended but I think readers should know who the comments are coming from- voters versus self interested parties.

not the campaign manager. Regardless, Lucy is bad for Norwalk, sorry.

Oh yes. My bad- you are actually his treasurer. That’s where I remember your name. It is listed on Fred’s campaign posters.

@Martin Baker, you are entitled to your opinion but not your facts. The democrats have been the party in charge of our legislature for over 40 years, except for 2 years a very long time ago. To blame Republican legislators for their abysmal failure is rich. I would have more respect for people who defend their record instead of trying to shift blame to convince voters to vote for them one more time in the hope of changing the results…