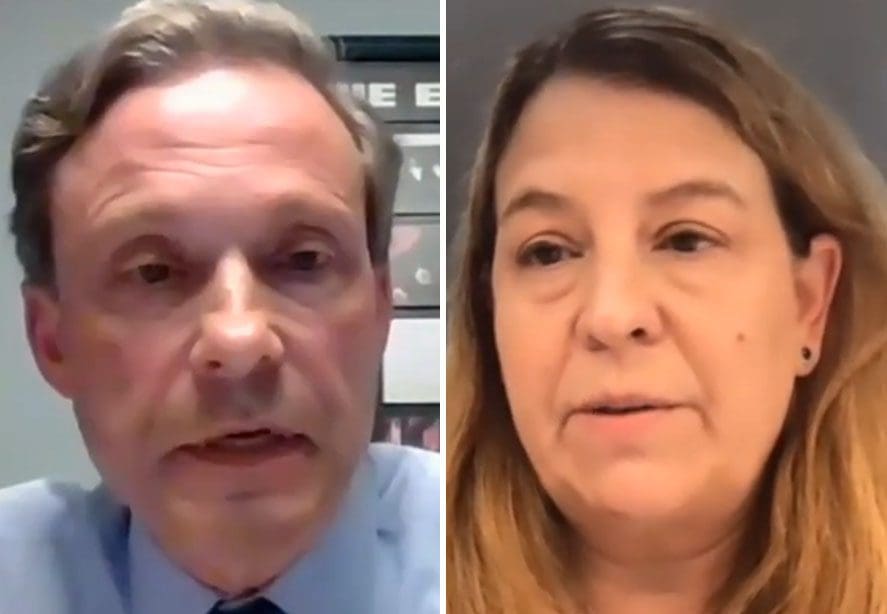 District 142 State Representative candidates, as shown in the League of Women Voters of Norwalk debate on Zoom: at left, former State Rep. Fred Wilms, a Republican, and at right, incumbent State Rep. Lucy Dathan, a Democrat.

The election is Nov. 3. Many Norwalkers are voting by absentee ballot.

State Rep. Lucy Dathan (D-142) and her Republican opponent, former State Rep. Fred Wilms, are tussling over the seat she took from him two years ago. Dathan touted a record of strong constituent service, while Wilms said his one vote would have kept the existing qualified immunity provision in for police officers.

Wilms brought up the bill right at the start of Thursday’s debate, pivoting on a question about legislative committees. He said he’s knocked on thousands of doors and “people are asking, ‘so what’s up with the – why are people going after our police?’”

Norwalk Police have been nationally accredited since 1995 and Minneapolis Police are not, and the qualified immunity changes really hurts good cops and stops proactive policing, he said.

Dathan said she’s supported police and accused Wilms of supporting proposals to divert funds away from police officers during the four years he served.

She looked at the proposed bill very closely, analyzed it with Democrats who are police officers and responded to her constituents’ demand for accountability, as shown in peaceful protests here, she said.

In addition to the elements that are widely praised, the bill “gives the municipalities (tools) to get rid of the bad actors and not let them jump from city to city. No police officer wants to work with bad cops and bad actors,” she said.

Wilms agreed there’s much support for much of the bill but said, “This was rushed through in a special session.” If it were done in next year’s regular session, there could have been a “long set” of hearings, a lot of negotiations and “a sorting through to make sure that there’s a strong bipartisan approach.”

It doesn’t get rid of bad cops, that’s done with binding arbitration reform, he said.

“This bill was driven by legislators from Bridgeport, Hartford and New Haven,” Wilms said. “And admittedly they have their own set of issues and problems. This bill is an answer looking for problems that do not exist in Norwalk or in much of lower Fairfield County. And so you know, if I were a legislator, I would have voted to reflect the community interest.”

Dathan replied, “For many of our constituents, this bill was decades in the making, it wasn’t thought on a kneejerk reaction… Many people have felt that they have been unfairly treated.”

Wilms brought up the letter to NancyOnNorwalk that Dathan and other Democrats signed, criticizing Norwalk Police officers for their behavior when State Senate Majority Leader Bob Duff (D-25) visited on July 23.

“Any attempt to intimidate is unacceptable and reprehensible behavior,” Dathan and other legislators wrote.

“We’ve all seen the videos, we’ve all seen what’s happened,” Wilms said. “And what we haven’t seen is perhaps a retraction, or maybe even an apology.”

Dathan said she’s helped many of her constituents in the storm’s aftermath and “was very proud to be a sponsor of the ‘Take Back the Grid Act’ that offered compensation, and required backup generators or for our customers.”

Asked about affordable health insurance, Dathan said 11 percent of District 142 residents didn’t have health insurance, before COVID-19. She supports the public option, which “leverages the purchasing power of our existing large-scale health plans’ diversity, and the insurance coverage is actually paid by the insured, not the Connecticut taxpayer.”

Many aspects of the federal Affordable Care Act are already built into State statute, Wilms said, adding that he’s a supporter of covering pre-existing conditions. Small businesses should be able to pool together to offer their employees competitive plans.

Dathan thanked Wilms for praising a bill she’d worked on and charged that Wilms had voted in favor of a bill that allowed insurance companies to discriminate against people with preexisting conditions.

“My feeling is Fred may tell the story that he claims that he protects those preexisting conditions. but this is certainly not true,” Dathan said.

“Unfortunately, you’ve got your facts wrong,” Wilms replied. “Most of those Affordable Care Act provisions were built in, in the term before you were there.”

In closing statements, Wilms offered biographical information, detailing his service on Norwalk’s Board of Estimate and Taxation asserting that changes made to the Education Cost Sharing (ECS) formula in 2017 mirrored those he advocated for with then-State Rep. Bruce Morris (D-140), an example of his ability to work across the aisle.

Dathan began her statement with sharp criticism of Wilms. She’d gotten feedback on comments she made in the New Canaan League debate, when she called Wilms a quitter for resigning from his appointed post on the pension sustainability commission the day after he lost the last election, she said.

“The other day, he said it was just too hard because he was the only Republican. My question is, what is the next issue he’s not going to represent us on?” she said. “In contrast, I’ve been working for you, my constituents in this district and helping you through the challenges that we have faced together in the last two years.”

District 142 is comprised of parts of Norwalk and New Canaan. To learn your State Representative district, click here and enter your address.

Wilms lives in Norwalk; Dathan lives in the New Canaan side of Silvermine.