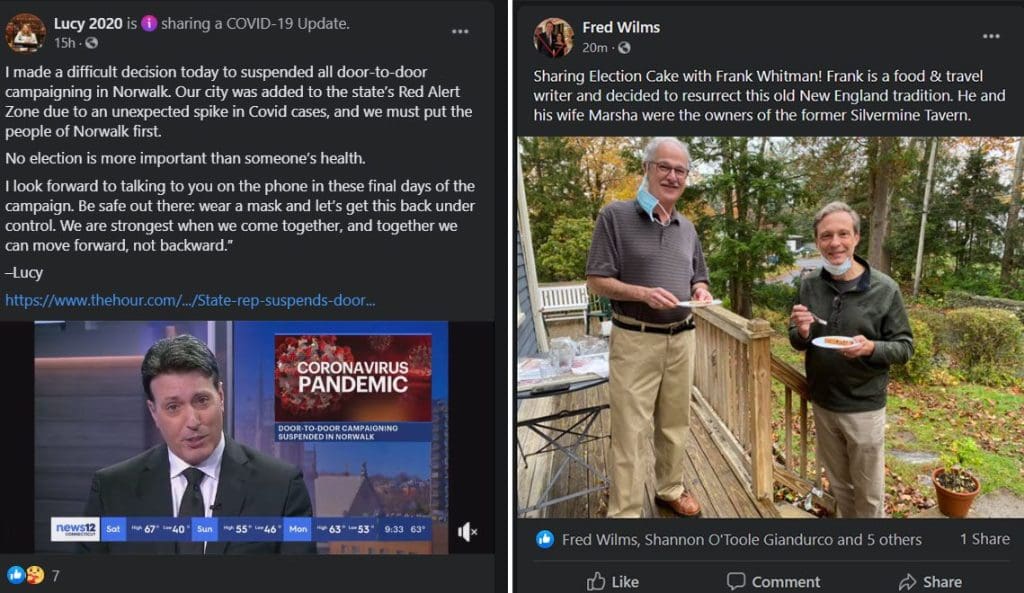 At left, a Friday Facebook post from State Rep. Lucy Dathan (D-142); at right, one from her opponent, former State Rep. Fred Wilms.

The election is scheduled for Nov. 3. Many Norwalkers are voting by absentee ballot.

NORWALK, Conn. — One local Democratic candidate announced that she is “suspending door-to-door campaigning in Norwalk out of concern for her constituents’ health amid the rising number of COVID-19 cases.”

It appears her Republican opponent is still at it.

Norwalk was added to the State’s Red Alert list Thursday. State Rep. Lucy Dathan (D-142), who is attempting to stave off a challenge from her predecessor, former State Rep. Fred Wilms, announced Friday that she’s not going out door knocking, given the recently released statistics and advice from the Connecticut State Department of Health.

“As of October 22, Norwalk entered the Red Alert Zone,” Dathan said in a press release. “While the state and local authorities have been vigilant and successful in monitoring the virus and its impact on our neighborhoods, we have to heed the recent increase in new cases as a warning to be even more cautious, and modify our daily behavior accordingly. I cannot in good conscience campaign door to door and risk spreading the virus to innocent people.”

Dathan said, “I am adjusting my campaign schedule to focus on communicating with my constituents through virtual events and telephone calls as opposed to meeting them at their doors for the next week, and I call on my opponent Fred Wilms to do the same. Together, let’s help get Norwalk out of the red.”

“I will continue to follow all CDC and Department of Health guidelines,” he wrote.

Just before 1 p.m. Saturday, Wilms post a photo of himself eating cake with a constituent.

“Sharing Election Cake with Frank Whitman!” Wilms wrote. “Frank is a food & travel writer and decided to resurrect this old New England tradition. He and his wife Marsha were the owners of the former Silvermine Tavern.”

If I didn’t know better I would think this sounds like someone is politicizing Covid?…Follow the science and CDC guidelines. Isn’t that what we have been told over and over?

Other campaigns are still out maintaining Social Distance and wearing masks. There is nothing wrong with going out and meeting the voters. Stews is still busy, so is Stop & Shop, Wal Mart, and life is still moving on.

If anyone campaigning knocks on my door, I will not answer.

Our very own Winston Smith. So the Ministry of Truth has determined that door knocking in a period of increased testing is contributing to the numbers of positive cases. Got it.

I find this interesting from a candidate whose motto is “forward not backward”. Science has moved forward and established that proper distancing and mask wearing are effective at stopping the spread. Or do we no longer believe in science and prefer out of control hysteria?

For all the trouble this year, there are moments of comedy gold.

The way the Democrats and Republicans have behaved, nationally and locally can be summarized in this page.

One the one hand you have a woman candidate who put the health and safety above her own interests and suspended her campaign as our area experiences a spike in new cases. On the other hand you have a male candidate not even bothering to keep social distance, much less wear a mask, in order to (wait for it…) eat cake.

You can’t make this stuff up.

Anyone who knocks on my door loses my vote. I was in a line for 5 hours on Saturday at Norwalk Stepping Stones waiting for my son to get Covid tested. The site was overwhelming. First hand seeing Norwalk starting to spin. Fred may live in Norwalk and say he ‘is for us’, but this makes him appear incredibly selfish, entitled, and out of touch.

Keep knocking on doors, Fred. John O’Neill nailed it. This is nothing more than an effort to politicize COVID. As Drew T points out, it’s OK to go to Stew’s, Stop & Shop, and Wal-Mart but knocking on doors while wearing a mask and social distancing is a problem!!! Seriously!!!