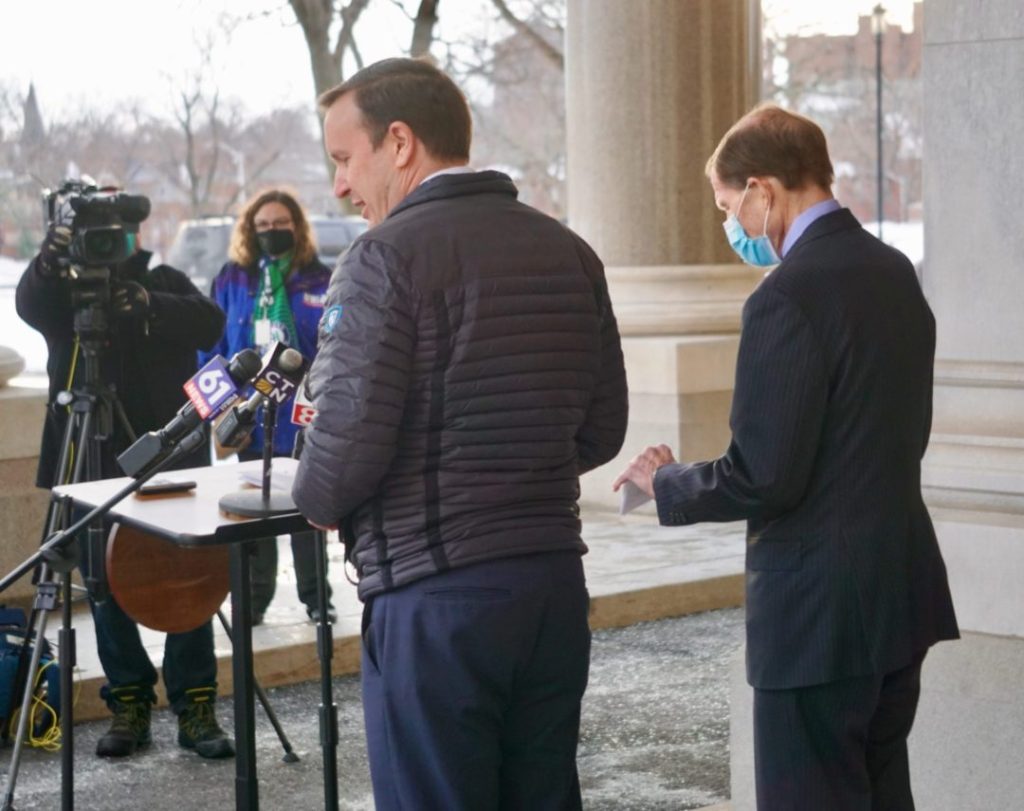 The state’s two U.S. senators, Democrats Richard Blumenthal and Chris Murphy, drove back to Connecticut after a late-night session Monday to deliver a carefully calibrated celebration of the compromise bill — and a withering critique of Senate Majority Leader Mitch McConnell, R-Ky., who refused to take up previous measures passed by the House Democratic majority.

“It’s regrettable that Senator McConnell refused to negotiate for the summer and fall, leaving us to furiously try to get this funding bill done before Christmas. But better late than never,” Murphy said. “This money coming to Connecticut and coming to Connecticut families that are in really dire need this holiday season, it’s going to save lives. And it’s going to put us in a position to finally, finally turn the corner on this crisis.”

A few hours after Blumenthal and Murphy spoke to reporters Tuesday outside the State Capitol in Hartford, Trump posted a video to Twitter in which he blamed Democrats for delayed action on a relief bill and complained it offered too little direct aid to families and restaurant owners.

“Democrats cruelly blocked COVID-relief legislation in an effort to advance their extreme left-wing agenda and influence the election,” Trump said.

Trump suggested $2,000 in direct aid to individuals, not the $600 in the bill.
House Speaker Nancy Pelosi, D-Calif., quickly answered on Twitter: “Republicans repeatedly refused to say what amount the President wanted for direct checks. At last, the President has agreed to $2,000 — Democrats are ready to bring this to the Floor this week by unanimous consent. Let’s do it!”

The unexpected flurry of tweets came at the end of a day in which members of Congress began to explain the bill to constituents and look ahead to another measure that Blumenthal said is necessary to provide stability to an economy rocked by business failures and massive unemployment.

The bill passed Monday is expected to deliver $9 billion to the state’s economy, arriving as direct payments to residents, forgivable loans to businesses through a renewed Payroll Protection Program, aid to school systems, extended unemployment benefits and money for COVID-19 vaccinations.

Under certain conditions, many of the 65,000 businesses that received aid through the original Payroll Protection Program in the spring can apply again.

Direct payments to families are expected to go out by the end of the month, bringing $2,400 to middle-class married couples with two dependent children.

“We estimate with some back-of-the envelope math that there’s going to be about 1.6 million people in Connecticut who will receive these checks, bringing to Connecticut about $1.6 billion,” Murphy said. “Most of that money is going to go straight into Connecticut’s economy. And so that’s going to trickle down to help a whole lot of other people here in Connecticut, small businesses in particular.”

An 11-week extension of jobless benefits, plus $300 in weekly supplemental payments, will protect thousands of unemployed people who faced a loss of benefits as early as next week. But Blumenthal said the 11-week extension also is a countdown to the deadline for another relief package supported by President-elect Joe Biden.
“This pandemic relief bill is like a shot in the arm to our economy, much like the virus vaccines that people are getting in their arm,” Blumenthal said. “Like those vaccines, there has to be a second dose for it to be effective.”

“This one is just a down payment,” Blumenthal said. “The next one has to come right on its heels, because small businesses, families, communities will all need another shot in the arm economically for them to survive.”

As the senators spoke in Hartford, U.S. Rep. Jim Himes, D-4th District, was conducting the last of three webinars reviewing the sweeping measure and providing some early guidance for how to use its provisions. Videos of all three are available on his Facebook page. U.S. Rep. Jim Himes on the first of his three webinars Tuesday explaining the provisions of the pandemic relief bill.

One of his guests was Betsy Paynter of the Connecticut Small Business Development Center. Her publicly funded organization will be offering on-line workshops that can be accessed at CTSBDC.COM. The first workshop is 9 a.m. Wednesday.

Himes said detailed guidance will be forthcoming from the Small Business Administration, which is overseeing some of the relief to businesses. But Himes and the senators emphasized some changes, such as added help for restaurants.

Restaurants can apply for larger forgivable loans than other businesses. While the standard is 2½ times payroll, the multiplier for restaurants is 3½.

For businesses that took PPP money in the spring, there are limits.

“There are some qualifications. That second draw will be available to businesses with 300 or fewer employees. And that business needs to be able to show revenue loss of at least 25% in one of the quarters in the calendar year 2020,” Himes said.

Himes said theaters and other “shuttered venues” can apply for a special $15 billion grant program, but they cannot also use PPP. He said $2 billion of the money is set aside for venues with 50 or more employees

“These are your museums, your independently owned theaters, your live venues. Organizations are cultural organizations in our cities,” Himes said.

McConnell blocked a major grant program for state and local governments, allowing only funding that had a direct connection to COVID-19 expenses, as opposed to tax revenue lost due to the pandemic-related recession. Republicans held out the possibility of governmental aid if Democrats agreed to granting businesses and other entities protection against COVID-related litigation.

“They simply want a virtually blanket shield from immunity, a protective shield that is really unacceptable,” said Blumenthal, one of the Democrats involved in the negotiations over liability. “It will close the courthouse doors to Americans who are deeply hurt by the lack of care on the part of employers or others who are responsible for injury and death.”

Himes said the inability to find common ground was frustrating.

Murphy said he suspected the liability issue was a pretext for McConnell to block government aid.

The pandemic relief was tied to a $1.4 trillion omnibus spending bill, one of the preferred methods of Congress to fund the federal government. Unlike the state legislature in Connecticut and other states, Congress rarely adopts a budget through the formal appropriations process.

U.S. Rep. John B. Larson D-1st District, said the House reviews federal spending through its Appropriations Committee and 12 subcommittees, but the Senate has preferred under the control of both parties to budget via an omnibus spending bill — one that essentially is negotiated by the top leaders of the House and Senate.

“The Senate rarely votes on these bills until it comes up with an omnibus package, which allows them to stick things in, and it allows the dismissal of regular order,” Larson said. The House passed three previous relief bills in May, September and October that McConnell never called for a vote.

The omnibus process is one of negotiation and deal making.

Items of special interest to Connecticut in the omnibus bill include: $135 million for a new federal courthouse in Hartford; $2 million for research on crumbling foundations due to the use of aggregate with pyrrhotite, a mineral that expands and causes cracking when wet; $1.1 billion for nine CH-53K helicopters built by Sikorsky; funding for a second Virginia-class submarine built by Electric Boat; and $5 million for a Coast Guard museum in New London.

The Hartford courthouse was a priority of the federal judiciary, but it never made the cut until this year, when U.S. Sen. Lamar Alexander, R-Tenn., began pushing for $189 million for a new federal courthouse in Chattanooga, Tenn., and that put courthouse funding on the GOP agenda in the Senate.

“They threw a bone to Alexander,” Larson said.

It became easier for the Connecticut delegation, whose members include the next chair of the House Appropriations Committee, U.S. Rep. Rosa L. DeLauro, D-3rd District, to get Hartford in the bill with Chattanooga.