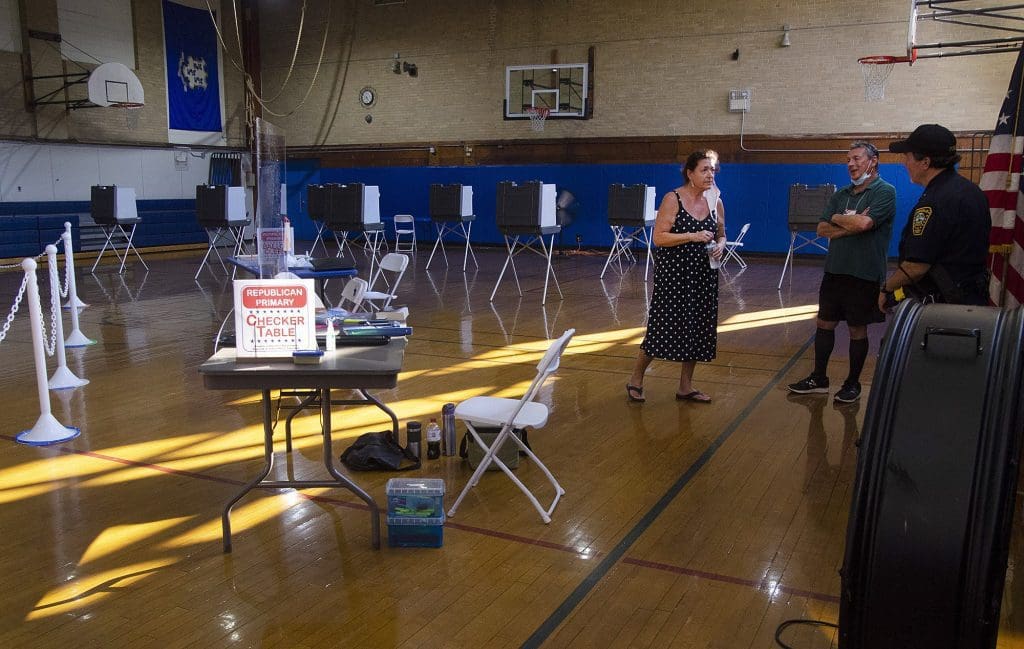 NORWALK, Conn. — Norwalk voters went to the polls Tuesday, in small numbers but with a big sense of civic duty.

“There’s a lot of people that have fought for this right to come out and vote, (I) just think it’s something that’s important for us to come out and make a difference,” Basiru Danazumi said, after voting in the Presidential primary at Marvin Elementary School. He cast his ballot for Joe Biden, “just to show support.”

Less than 2,000 people had gone to the polls to vote at about 6 p.m., Democratic Registrar Stuart Wells said. That’s less than 25 percent of the ballots that were cast in the 2016 Presidential primary.

So, vote tallies won’t be available until Thursday.

A voter checks in Tuesday at Marvin Elementary School.

Inside Marvin, Peter Halladay was working the polls in the socially distanced way necessary under COVID-19. He called the event a “waste of money,” as everyone knew President Donald Trump was going to be the Republican nominee and Biden his Democratic challenger.

Tasheedah Roberts, poll moderator, said there were few people coming in to vote. The biggest issue was people bringing in absentee ballots and expecting to hand them in.

Since City Hall was a short drive away, most chose to go drop them in the ballot box there, she said. Some chose to cast a ballot in person instead.

Town Clerk Rick McQuaid recently said that poll workers would be able to tell if people were attempting to vote twice by voting in person after mailing absentee ballots.

“If that doesn’t happen, we will have a backup plan we’ve already discussed the last few days that we’re still do check offs from the ballots that we have, the envelopes we have. The registrar of voters will do check off on the books that go out to the polls,” McQuaid said.

Information from ballots coming in during the day will be immediately given to registrars and the information sent to the polls, he said.

“They chose to vote here,” she said, also noting that they can’t vote twice. 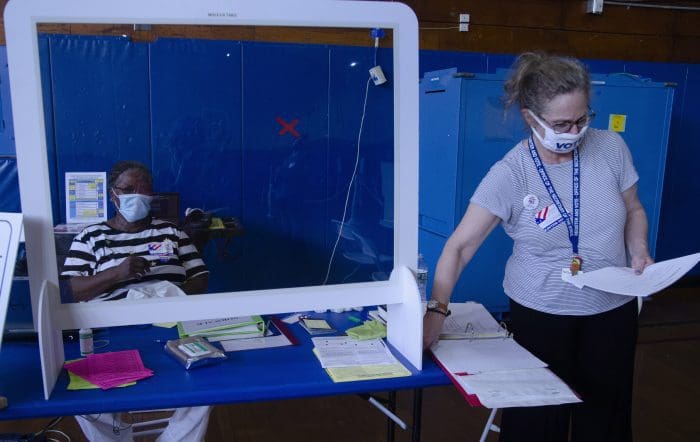 Then there were typical polling problems, voters showing up at the wrong polls because the locations shift from municipal election locations and state/federal locations, and voters getting frustrated because they can’t vote in a primary because they aren’t registered in a party.

Darraugh Cianfichi was among those who couldn’t vote, she said, standing outside Nathan Hale with her mask on although she was out in the open and could have removed it. She expressed embarrassment about not being registered in a party but said she’ll be ready for the next one.

So why come out to vote during a pandemic when you know what the outcome of the election will be?

She said, “You can’t have rights without having duties.”

Poll workers need to be more respectful of the voters and each other by wearing masks and wearing them correctly. Many were seen with masks worn below their noses and one gentleman wore his excellent N-95 mask on his chin the entire day. Why bother?

Re: Gary Leeds question – First, you need to apply for an Absentee (or Mail-In Ballot). Once you receive the registered ballot from City Hall, you cast your vote and return it.

Prior to the Primary or Election Day, voter’s names are checked off as having voted by Absentee Ballot in the street lists that go out to the polls. That’s done right up to the night before the polls open.

As additional Absentee Ballots are delivered by the Post Office or returned to City Hall on the day of the election, those ballots are verified and voter names are called over to the appropriate polling locations to be updated on those lists. If it’s found the voter has already cast a vote in person, the Absentee Ballot is removed from being counted.

If a someone decides they want cast a ballot in person but their name is checked as voting by Absentee Ballot, they can’t cast a vote at the polling location until a call is made back to City Hall and that person’s Absentee Ballot is pulled. Again, this is done to keep it from being counted in the Absentee Ballot tally.

Totally safe and secure – many checks and balances and all numbers must add up correctly or it’s a very long night!

It sounds like if I vote absentee I send in a ballot with my name on it.

How is the secrecy of my choice gteed in that case?

@ Gary:
One year, my sister voted for me by absentee ballot. If I recall correctly, she called the Town Clerk to confirm receipt and was told that they had not received her ballot. She changed her schedule and drove to Norwalk to vote for me in person. During her drive, the Town Clerk’s office processed the mail & officially received her ballot. She showed up at Ponus and they knew right away that the Town Clerk had her absentee ballot. She was not allowed to vote twice (nor would she want to!). It was an honest mistake as she genuinely believed her vote had not been cast when she showed up at Ponus, and did call to check first. No harm done, other than a wasted trip for my sister which was not the Town Clerk’s fault as the mail arrived after her call on Election Day.

Just wanted to add:
If my sister had arrived at Ponus before the Town Clerk’s office processed the mail (with her absentee ballot), and thus had voted in person, the Town Clerk’s office would have discovered this before the inner envelopes with ballots were removed from the outer envelopes with people’s names. Once they confirmed she had voted in person, they would have thrown out her absentee ballot. No double vote. No harm done.

Re: Question from Curious – There are 2 envelopes with each ballot. You make your selections on the ballot, and then put it in an “inner” envelope and sign the envelope to attest that it’s your vote. You then put the inner envelope into the “outer” envelope which has the registry number.

When it arrives back at City Hall, they can keep track of who did or did not vote by Absentee Ballot from the number on the outer envelope.

On the day of voting, a group of moderators removes the inner envelope from the outer envelope and that batch of outer envelopes with the registry number are taken away.

Finally, the folded ballots are unfolded and prepped for counting. They are counted the same way as they are done at the polling stations and once again, all the numbers must add up.