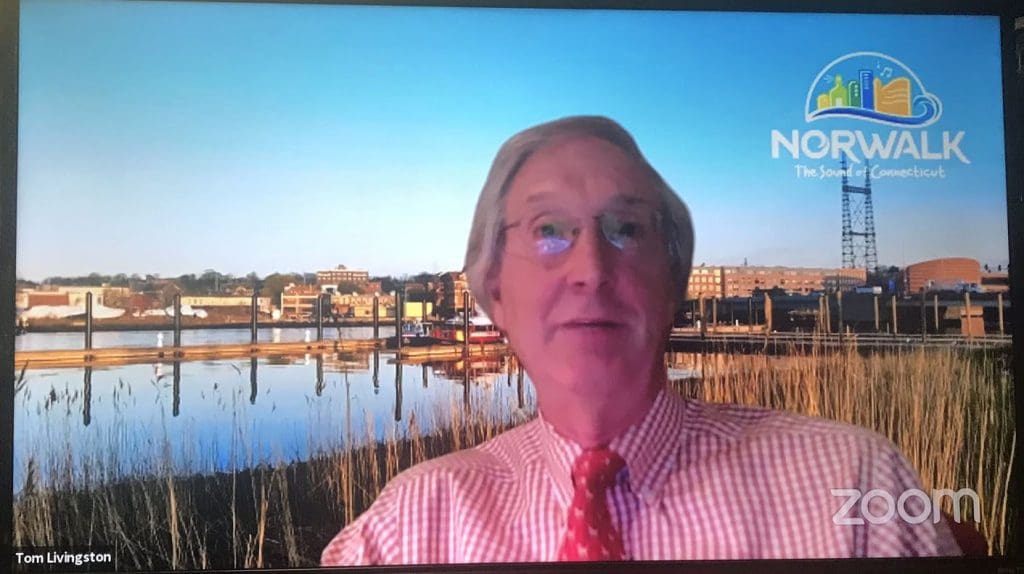 Two of the three went on to vote in favor of the borrowing $129 million to fund infrastructure projects that include a new Norwalk High School, road paving, athletic fields, flood mitigation and a new Cranbury Elementary School.

The vote on the $153.8 million 2020-21 capital budget was 13-0-1, with the lone Council Republican dissenting. The budget factors in $24 million in expected grant funding, so it’s $129 million that’s now authorized for bonding.

Norwalk has committed to too much borrowing, Dachowitz said last week. On Tuesday, he endorsed the authorization to add to the total.

“As the Mayor said, if circumstances don’t work out the way we see, we do not necessarily have to move forward (with the borrowing), but (the approval) buys us some time,” Dachowitz said. “That’s part of what we’re trying to do. Buy some time, see how the economy and events develop and then we can make even better decisions down the road. We’re looking for flexibility.”

Residents in Cranbury and the northern part of East Norwalk will be very happy to see the budget pass, so they can get relief from constant flooding, Planning Committee Chairman John Kydes (D-District C) said, in highlighting what’s in the budget.

The West Rocks Middle School soccer complex is in the budget, as are the Broad River baseball complex and the Brien McMahon High School turf softball field, he said.

“We’re right at the finish line on those,” he said. “And hopefully ‘corona’ will be behind us and kids will get to enjoy. These new fields we’ll have by the end of the summer.”

And, Norwalk High School will be 80 percent paid for by the State, he said.

“This is a very large budget with a lot of really important items, like John mentioned,” Council member Tom Livingston (D-District E) said.

Dachowitz’ presentation last week was “a little sobering,” Livingston said. “And I just want to say that, while I support, strongly support the proposed capital budget, I also recognize that we need to be prepared to make adjustments down the road should the financial situation in the city change, because of COVID-19 or any other reason, but I think it’s a good budget.”

It was “very sobering,” Council member Thomas Keegan (R-District D) countered. “These are very, very different times, and nothing than any of us are prepared for or know what’s going to happen in our future.”

“I watch how the communities around us, most of them, many of them nationally and the state level, and even the ones very nearby, all of them are making cuts. And we’re not,” Keegan said. With people out of work and worried about how to feed their families, “I think we are being a bit aloof. And we’re walking about with not a care in the world. I just I don’t know why we think we’re different. Because I don’t think we are.”

“This crisis has defined a future of uncertainty and to deny this uncertainties existence and maintain a course, that was started before the viruses impact may not prove to be prudent,” he said. “I mean, it may get worse, it may stay the same, but I think that we can all agree that we’re not going to be going back to January of 2020.”

It’s a reality that difficult decisions will have to be made in the coming two years because of the crisis, he said. 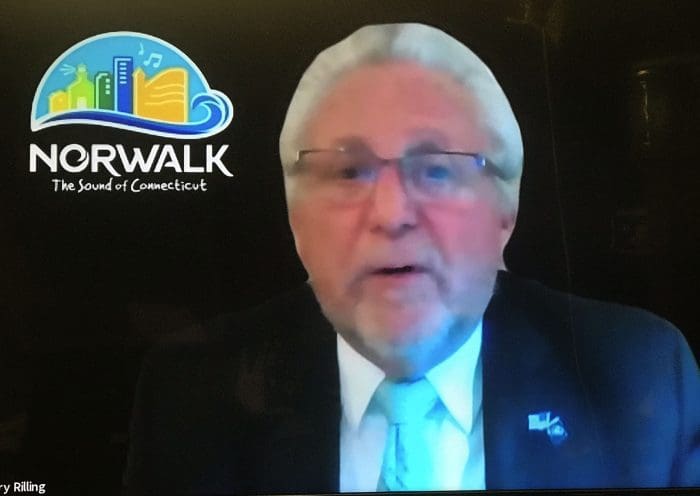 “It’s not an authorization to spend,” Mayor Harry Rilling said. “Nobody knows more than I do about the need to be frugal and to make the tough decisions that we have to make should the situation change. But if we don’t move some of these items forward, they cannot move forward at all. But if we move them forward, and things change, we don’t have to bond them. We don’t have to proceed with them.”

He likened it to taking out a home equity line of credit, saying that you get it in case you need it, but you don’t have to use it.

Some of the projects in the “carefully crafted” budget will boost the economy because people will be working, and if Norwalk doesn’t go ahead with Norwalk High School it’s an opportunity lost, he said.

It’s an investment in infrastructure that was neglected before he was elected in 2013, he said. “Our schools have not been kept up. The money has been spent elsewhere,” and the City’s consultants have said the Triple A bond rating is not at risk.

“Nobody will be quicker to say, ‘look, we can’t afford this,’ than me when it comes time to make the decisions,” Rilling said.  “…If we don’t invest in our infrastructure… it’s either pay me now or pay me later.”

Story corrected at 3:54 p.m. to show that the vote was 13-0-1. Council President Barbara Smyth (D-At Large), a Norwalk High School teacher, recused herself.

Thank you Tom Keegan. Aloof is putting it mildly…

Spending money you DO NOT HAVE is NEVER a good idea. Why do we have money for a “new school” but no money for maintaince of an existng school.????? We spend all this money on education but are not smart enough to maintain existing schools?? While there seems to be a lot of teaching going on, ther also seems to be very little LEARNING going on.

How nice (not) for the city to put through such a budget when so many tax-paying citizens are in such dire financial straits. It’s DISGUSTING! Can’t help but wonder who’s hands are in who’s pockets!

My fellow residents and shareholders in Norwalk. As chair of the Norwalk Republican Town Committee, I wanted to say how proud I am of Councilman Keegan and others who pointed out that the passage of 129 million dollars to potentially be bonded for more debt is sobering and potentially dangerous to the financial health of the city and us the shareholders of the city. Last week CFO Dachowitz stated, “Norwalk is committed to too much borrowing”. This week more borrowing was approved. I am sorry which is it? In all respect, I salute the Mayor and other elected city officials on the running of the city during COVID. I would ask that other elected officials not get as involved. Coming from the business world and even now having to make decisions regards financial situations and keeping people or laying them off is not and never will be an easy task. I ask that we as citizens start looking at ourselves as shareholders in our city. That we look at council members as our board of directors. I do this because the way board members get replaced is by a vote. I ask that no matter if you are R, D , I, or U that you think about what I have said. If you agree, come get to know the new RTC better and join us with your vote. I would love to hear from anyone who wants to contact me at [email protected] Have a great day, focus on what matters and stay safe.

“Sobering”. Sure. Yet they still spend like drunken sailors. But here is a little something else….

In the NoN article from 5/13 titled “Rilling’s & Duff’s detractor MIA“ – Harry used the phrase: There is no Republican or Democratic way” ……and added, “to deal with this pandemic,” said Rilling.

That phrase and “concept” was unmistakably “borrowed” from Lisa Brinton – who has widely used that exact phrase for years. “There is no Republican or Democratic way to pave a street, educate a child, etc.

Everybody knows that Harry only knows the “democratic party” way to do anything in this city.

“Nobody knows more than I do about the need to be frugal and to make the tough decisions that we have to make should the situation change”.

That whole “nobody knows more than me” sure seems like a direct quote from Donald J. Trump. If you think about it – the mayor and DJT share allot in common.

I realize the mayor won’t lose a single vote for plagiarism, but seriously – he employs (and the taxpayers pay) a full—time media / public relations guy (Josh Morgan). You would think they could figure out a way for Harry to say something original.

Describing the Common Council aloof would be a compliment to that group.

I commend all of the commentators here and agree wholeheartedly with you all. I’m appalled by the what’s happening in this City!

@ John B. Aloof might not be the correct term. Tone deaf and oblivious to the short, medium and long term financial impacts on the cities tax paying residents, and future city finances might be a better descriptive.

Here is an interesting article from Colorado regarding Denver and many other municipalities predicament….

@Andrew, thank you. I have zero confidence in this city’s admin., our ‘Common Council’, BoE, etc. If there’s a silver lining to this pandemic its that exposed the utter in-competencies of these elected officials.

Lots of signs of incompetence prior to this budget. Here are a few in no order:

1. The ongoing POkO development fiasco on Wall St.
2. Wall St. In general
3. Continued lack of enforcement of rampant zoning violations leading to unsafe living conditions and to the the influx of ELL students to Norwalk
4. Multiple Mayors making in excess of $140k each
5. The soon to be unviable Mall calamity
6. The ongoing confusion and throw-spaghetti-at-the-wall strategy of beach parking regulations
7. Boondoggles, like the new Norwalk High that noone wants
8. Lack of litter pick up outside of Sono
9. Coddling of Public sector unions
10. Rillings attempted at a goatee

Weak mayor/Strong council? Yeah, right. Local fiscal responsibility of taxpayer dollars should not be a partisan issue. Thank you, Tom Keegan, from this Unafilliated taxpayer, for being the voice of reason while the herd trots toward the cliff. We can, at very least, say they were forewarned, which is not helping taxpayers one bit. This all is becoming very hard to watch for those of us who have accounting and/or CFO backgrounds. Does anyone on the C.C. possess such expertise?