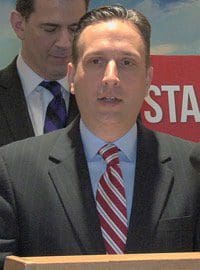 It’s a way to reduce burdensome property taxes in Norwalk, said state Sen. Bob Duff, who noted the city is in line to receive more than $6 million in shared sales tax receipts.

Separately, he said, the city is to receive an $800,000 increase in education cost sharing (ECS) funds from the state.

We’re working to bring funds back to the city “even under very difficult times for the state of Connecticut,” he said.

Rep. Bruce V. Morris (140th Dist.) credited Duff with getting the shared sales tax legislation passed in Hartford when, he said, many believed it could not be done.

Really ……. Do you think that will happen. Governor say jobs cuts, budget needs review and cuts. Why didn’t they let the Republicans advise them? Larry Cafero, Jr. Tried to No avail. ….. Not the State of Connecticut is in BIG trouble. You made your bed Bob Duff and Malloy sleep in it. “…………..

The city has not received one penny and it is not likely to. As I have said since this was proposed, the bill will result in a net outflow of money, because it’s is predicated on the regional sharing of tax funds collected by the city. The study performed by the independent financial arm of the legislature showed we would lose 13% of every dollar in the program.

For Bob Duff to tout his accomplishments which are much more likely to lose the city money, is indicative of his complete lack of understanding of basic economics and reality. The state is laying off workers to close this year’s gap, which is one fifth of next year’s. Any money the state gets will be used to restore those union jobs. Since the governor is proposing cutting the most critical jobs, no one will dare try to stop that.

Interesting how Bob Duff can never find time to hold press conferences about what he is doing to keep taxes low or trying to make CT more competitive for job growth, just sideshows on how he is giving us all goodies as if he were Santa Claus, and as if we didn’t already pay this money to the state.

It is a sad joke that this guy doesn’t understand basic economics.