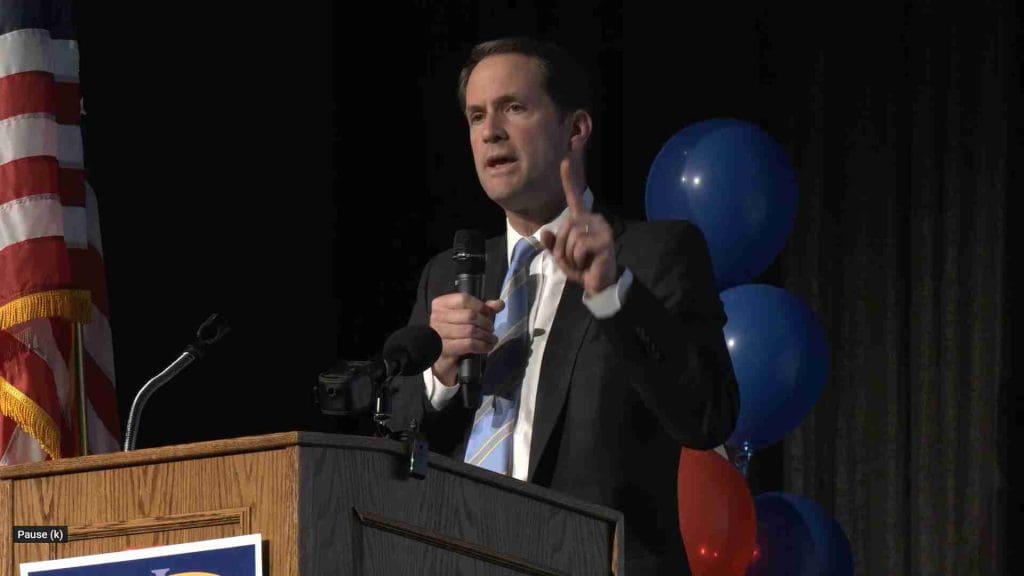 He will face Republican Jayme Stevenson in his drive for an eighth two-year term as United States Representative, according to a news release.

Himes’ acceptance speech was peppered with references to Democratic achievements and Jan. 6, and barbed shots at Republicans.

“Don’t ever forget what we have accomplished together. A decade ago, we passed health care reform that prohibited insurance companies from turning away Americans because they had preexisting conditions.”

“A decade ago, we pulled the economy out of a ditch, and made rules to make sure that Wall Street would never again destroy the economy and throw millions of Americans out of their jobs. Needless to say, Republicans opposed us every step of the way.”

“After Donald Trump bungled the COVID response with ideas about drinking disinfectant and attacks on scientists and doctors, we got America vaccinated and on the road to recovery. But not before his incompetence and self-obsession, cost the lives of thousands of Americans who didn’t need to die.”

“During the Trump administration, infrastructure week became a running joke is this infrastructure week is next week infrastructure week. Of course, the answer always was no, it is not until President Biden and the Democrats passed the biggest investment this country has ever made in our bridges, our trains, our airports and broadband. And yes, in combating the threat of climate change.”

“We cut child poverty in half in communities like Bridgeport and Norwalk by expanding the child tax credit. We provided money so that our towns and our cities could pay the nurses, the teachers, the policemen, and the firefighters who risked their lives every single day for two years.”

“We restored our country’s reputation and greatness and respect abroad just in time to unite the West against Vladimir Putin’s unprovoked and brutal attack on Ukraine.”

“What did Republicans do when Donald Trump was in the White House and they controlled the House in the Senate? They did two big things. They passed a tax bill that gave massive tax cuts to corporations and to the very richest Americans; 83% of the money in their tax cut went to the top 1% of people in this country, people who didn’t need that tax cut. And they raised taxes on the middle class and exploded the national debt.

“And as we all saw what happened last week, they put three justices on the Supreme Court, who are now about to take away a freedom that women have enjoyed for half a century, the freedom to control their own bodies…. Mitch McConnell is talking about a nationwide abortion ban.”

“Public housing developments (like Roodner Court are) full of families who want what every family wants for their children, a reasonable shot, a decent foundation in which to achieve the American dream… It’s our job to make sure that the children of Roodner Court … get the same access to education and support as any other child in America.”

“To this day, a majority of Republicans believe that Donald Trump won the presidential election of 2020. When a formerly great political party gets into the business of denying reality, even when 60 courts and all the facts show you what that reality is, when they embrace conspiracy theories and attack the very legitimacy of our democratic system, our country is very much at risk. And Donald Trump, the ringleader of the whole dark authoritarian, Proud Boy, Q and non-January 6 circus, he’s coming back.”

“Before his service in Congress, he worked for 12 years in business and five years in the non-profit affordable-housing world. He then decided to run for Congress because he did not want to keep America in an endless war and he wanted to help bring change to Washington with a commonsense, independent approach to ensure both sides of the aisle work together for the advancement of our country and our state.

“With a proud record of achievement in Congress, Jim looks forward to continuing the fight on behalf of all families throughout the 4th District, and working to help the economy grow, help our small businesses create jobs, help our local environment and protect our rights.”

Someone may want to let Jim know that President Trump has now been out of office for 2 years. The cognitive mess occupying the WH along with him have absolutely destroyed this country and everything good that was done under President Trump has been destroyed and he is part of that destruction. He doesn’t deserve another term by any stretch of the imagination. It is time for new fresh blood and female. Jayme Stevenson will wipe the floor with him. He is not doing anything to help our state or country. Oh wait he pops us right around this time to say look what I did. Well, Jim we see it and it’s not good and our country is in the dumps because of you and your party. My advice is to start collecting moving boxes and schedule the movers. Your wasting time in DC is OVER! VOTE JAYME STEVENSON!

Does Cong. Himes support the President’s reported decision to sign a new Iran Deal recognizing Iran as a nuclear weaponed nation ? And removing Iran’s Revolutionary Guards as a State sponsored Terror Group spreading destruction throughout the mid-east ? Or are foreign affairs outside the interests of Cong. Himes ?

Where does he stand after the 2000 Mules documentary?

What about these protests at SCOTUS justices homes?

Why are we funding Ukraine with 40 Billion with no way to pay it?

To DrewT, Piberman and CT-Patriot. Thank you all for speaking out. Our country has been destroyed and taken over by a bunch of communist democrats. We don’t need more democrats who work for themselves and not for WE THE PEOPLE’s best interests.