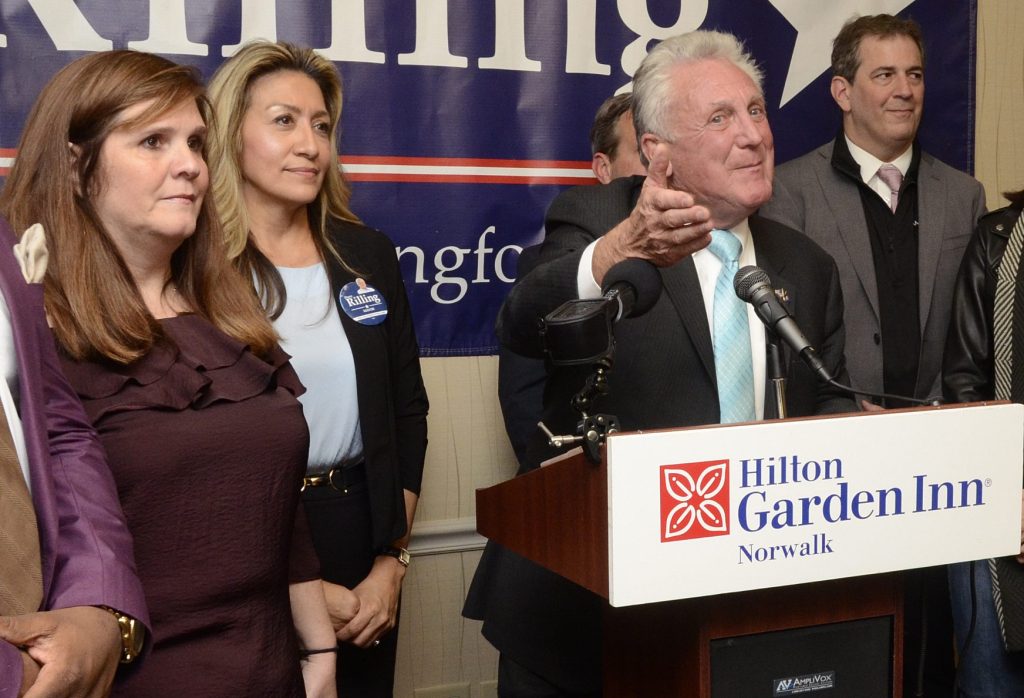 Christine Limone, left, attends the Norwalk Democratic Election night celebration in November, as her father, Mayor Harry Rilling, at microphone, celebrates his win. Between them is Lucia Rilling and at right is State Rep. Chris Perone (D-137).

NORWALK, Conn. – Three and a half years passed between the death of a four-month-old baby at the home-based day care center owned by Christine Limone, Mayor Harry Rilling’s daughter, and Limone’s arrest on five counts of risk of injury to a child, a felony. The delay begs the question: Why now?

The warrant affidavit in the case suggests the gap had nothing to do with politics and everything to do with the investigative process. State Police Detective Christopher Allegro, investigating Limone, obtained extensive new information in March, the affidavit states. Limone subsequently turned herself in on May 14 to face charges.

According to the State Police timeline, the baby died on Oct. 5, 2016. Limone voluntarily turned over her day care license on Oct. 28, 2016. In March 2017, the Office of the Chief Medical Examiner determined the baby’s cause of death was Sudden Unexpected Infant Death while sleeping prone in a Pack ‘n’ Play, a type of portable crib. The manner of death was undetermined.

Allegro is with the Connecticut State Police Western District Major Crime Squad. The case was turned over to State Police the day after the death at the request of then-State’s Attorney Richard Colangelo, who cited a conflict of interest for Norwalk Police, the affidavit states. Rilling served as Norwalk Police Chief for 17 years.

The affidavit notes that a medical examiner was surprised to learn Norwalk Police had already released the scene back to Limone on the day the baby died.

Rilling has said he has “never, ever interfered or tried to influence any decision regarding anybody in my family,” and said his daughter’s case “will proceed to the court system in the same fashion that any other case.”

Following the baby’s death on Oct. 5, Limone turned her cell phone over to Norwalk Police who were at her Hunters Lane home responding to her 911 call, Allegro wrote. About four hours later, she rescinded her permission to search the phone, an Apple iPhone 6S. Examination of the phone ceased, and the phone was secured as evidence. It was turned over to State Police along with other evidence 13 days later.

On Dec. 1, 2016, Allegro obtained four search and seizure warrants. Two sought call detail records for Limone’s cellular telecommunications, as well as those of her assistant. The other two authorized forensic analysis and examination of the devices, the affidavit states.

As the investigation progressed, however, Allegro recognized that the method TIU used “had failed.” Content and attachments from multiple emails sent or received on the date of the baby’s death “were not decipherable.”

Allegro obtained a second search and seizure warrant on March 3 to reexamine the phone. This search resulted in an “astounding quantity of electronic events logged within a limited time span” on the day of the baby’s death, the affidavit states.

There were voicemails, texts, photographs/video and emails, he wrote. “Suffice to say, many of these personal events were neither suitable nor appropriate to have engaged in while in a caretaking role where Limone was responsible for the care, safety, and well-being of five (5) children under the age of three.”

The affidavit describes multiple sexually explicit email exchanges that Limone engaged in on Oct. 5, 2016, starting before the baby’s arrival at 8 a.m. and continuing through 1:32 p.m. She also communicated with a mother of another infant in her care, and had a conversation about foster dogs with someone else.

A health app on the phone recorded Limone’s location at 12:31 as being 1.2 miles from the home, according to the affidavit.

Limone was the only caretaker present looking after five children, all less than three years old, two of them infants, when the baby died, Allegro states. Although Limone initially said the unresponsive baby had only been down for 20 minutes, it was paramedic Joseph Kearney’s opinion that the baby had been deceased for much longer, according to Allegro. Kearney cited rigor mortis.

Dr. Christopher Michos pronounced the baby dead at 2:15 p.m. in the Norwalk Hospital emergency room, Allegro states. Michos also believed the baby to have been dead longer than 20 minutes.

Limone called 911 at 1:30 p.m. to report the unresponsive infant, the affidavit states. After calling 911, she received an email from the man she’d been communicating with and moved it to the phone’s trash file.

She told investigators that she had allowed her assistant to leave the daycare 30-45 minutes before finding the baby. The assistant reported that she had left at about 1:15 p.m., after checking on the baby about an hour earlier and observing her to be breathing while laying on her stomach, head to her side.

Limone had been subject to nine unannounced compliance inspections by the Office of Early Childhood (OEC) since obtaining childcare licensing in 2002, the affidavit indicates. OEC had cited her for being overcapacity three times. She failed to demonstrate good judgment with regard to the supervision and safety of children, OEC stated.

Allegro states that the Department of Children and Families (DCF) placed Limone on the Child Abuse and Neglect Registry in February 2017, citing “the death of a child occurred due to her neglect.”

Allegro went back to the Office of the Chief Medical Examiner in December to present information gathered in the investigation, the affidavit states. This included an allegation of unsafe sleeping conditions for the children. Dr. James Gill declined in February to amend the original death certificate, which was issued by Dr. Susan Williams, because “he did not feel there was enough information” to warrant a revision.

A year ago, Cellebrite  announced a new version of its Universal Forensic Extraction Device or UFED, calling it UFED Premium, Wired Magazine reported. Cellebrite says that the tool can now unlock any iOS device cops can lay their hands on, according to the story.

NancyOnNorwalk was not able to determine whether Connecticut has upgraded to UFED Premium. Spokespersons from the comptroller’s office said they didn’t have that level of specificity in State Police expenditures. The Department of Emergency Services & Public Protection spokespeople did not reply to an email asking about Cellebrite.

A person who is very familiar with Norwalk Police matters, speaking on the condition of anonymity, said it would be impossible for Rilling to influence State Police.

Attorney Frank Riccio, Limone’s lawyer, declined to comment on specific aspects of the affidavit. He said in May that he and his client “plan on vigorously defending these charges. Ms. Limone and I have yet to review the evidence so cannot comment on the content of the warrant, but assuming the factual contents of the warrant are accurate I cannot see where her action rise to the level of criminal conduct.”

Why so much detail while skipping over the fact the Mayor bought and owns a portion of the house where complaints had been lodged prior? He and his lackeys routinely sling mud at others ability to manage and run things, yet in his own personal life he did not have the capacity to understand that you never buy real estate where a business is being operated without forming an LLC. Unless you have no idea what you are doing in such basic financial matters. This is an important aspect and example for people to understand how poorly this city is being managed right now.

This mayor and his family are turning out to be a disgrace. There’s a conflict of interest involved in the fact that a twice retired municipal employee is the mayor. He cannot be impartial and that’s obvious, both regarding his family and his former colleagues. That much is clear.

We have our own version of The Biden’s right here in Norwalk.

My heart goes out to the infant’s family.