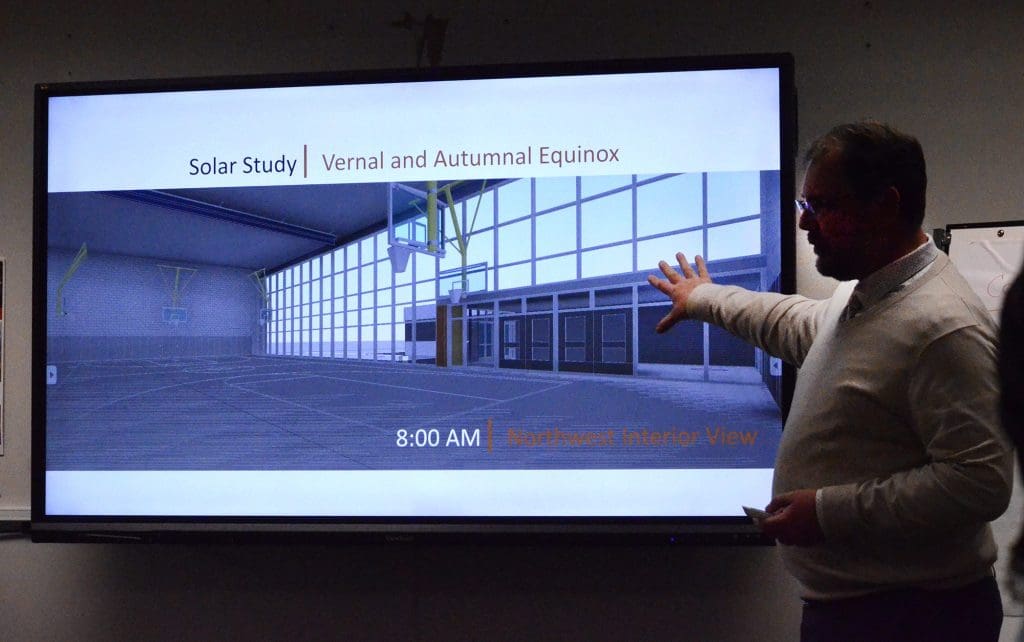 NORWALK, Conn. — Renovation efforts to transform Jefferson Elementary School into a like-new building should be beginning about a year from now, Alan Lo said.

There’s a new idea for the design: reorienting the gymnasium 90 degrees from the concept presented a year ago. This solves several issues and creates the possibility of floor to ceiling glass, bringing the outside in, architect Michael Losasso said at Thursday’s Board of Education Facilities Committee meeting.

Board of Education Chairwoman Sarah LeMieux immediately questioned the safety of floor to ceiling glass, while agreeing with others that it would be gorgeous.

The plan to renovate Jefferson hinges on the upgrade to Ponus Ridge Middle School, turning it into a K-8 facility. The new addition is complete and the middle school students are occupying it, said Lo, Norwalk Building and Facilities Manager. The the middle school renovation itself will be complete by September and then the Jefferson kids will move into the addition, freeing up their building for the extensive re-do, he explained.

Norwalk has allocated $33 million in capital budget funds for the Jefferson “as new” renovation, over the last two years, with an expected reimbursement rate from the state at 32.5 percent, a higher rate than ordinary renovation due to the “as new” designation. The original proposal was for $23.9 million and a year ago the total cost was estimated as $27.8 million, but the gymnasium was added to the plans to eliminate what Project Architect Lisa Yates called a “cafegymatorium.”

Jefferson has had a combined cafeteria, gymnasium and auditorium. The as-new school is planned to feature an expanded kitchen space in the cafetorium.

The idea to reorient the gymnasium grew out of Jefferson staff suggestions to put the gym on top of the auditorium, out of concern that playground space was being sacrificed for a new bus loop and a separate gym, explained LoSasso, of Antinozzi Associates.

Research showed that idea was infeasible but turning the gym provides more open space, keeping the playground, solves a problem with exits and provides better surveillance for safety purposes, LoSasso said. And, if you put in floor-to-ceiling glass, you not only “bring the outdoors in,” but also make the school more inviting because students arriving by bus would be walking past a view of the gymnasium instead of a brick wall.

A computer simulation showed that sunshine on the north-facing glass wall would create glare in the summer, but this could be alleviated with fritted glass, which features a ceramic material adhered to the glass in a pattern, LoSasso explained.

There’s a school in West Palm Beach that has floor-to-ceiling glass on a gymnasium and he had called to ask questions, he said. The basketball court is close to the glass and there are no problems, and they have pads on the steel to protect students. The glass is also impact resistant.

LeMieux made it clear that she and other BoE members were actually concerned about shootings.

School Guard Glass provides intrusion resistant construction just for that purpose, and a meeting is planned with NPS School Preparedness Coordinator Joe Rios, LoSasso replied. The glass wall “would largely be blocked from any view” due to its proximity to the steep hill involved on the site, and “you’re, I think, fairly well secure until you’re actually on the grounds in this vicinity.”

Board member Colin Hosten suggested starting the glass at a higher level.

Architects had thought about that but the ideal is to connect the indoors with the outdoors by having the glass at least floor to head high, LoSasso said. “But yeah, there’s all sorts of options. …we knew that there would be concerns, obviously. So, I wanted to bring it up early in the design process. We’re still working at thoughts and ideas about it.”

The bus loop and other concerns

The school will look basically the same from the street, with the only exterior change being the replacement of all the windows, LoSasso said. The public entrance will remain where it is and most administrative offices will be on the ground floor, with an assistant principal’s office near the third-floor rear bus loop, made possible by the site’s steep terrain, where there’s a view of the students coming and going.

Pre-schoolers and first graders would be on the first floor because, by law, they must be able to exit during an emergency without using stairs.

A plan has developed to have the tots who ride the bus congregate in the gymnasium and be “staged” while older kids make their way to their classrooms, and then go downstairs, LoSasso said. This was the administration’s solution to the problem and NPS will be obeying the law, as the younger students still have the necessary egress during an emergency.

Parents will drop off their students on the lower level, allowing for the separation from buses that is a feature of modern school design. The gymnasium entrance would only be used for students exiting and entering buses.

“When the buses aren’t there, it is like a park. It’s a safe place,” Yates said.

There are only five or six buses because most kids walk to school, and most parents drop off their preschoolers due to issues like car seats, it was explained.

The furniture budget won’t fund replacing all the furnishings, LoSasso said. It’s suggested at this early stage that desks and chairs be replaced for all teachers and children as the “most equitable” option with a configuration “unanimously desired by all the faculty.” 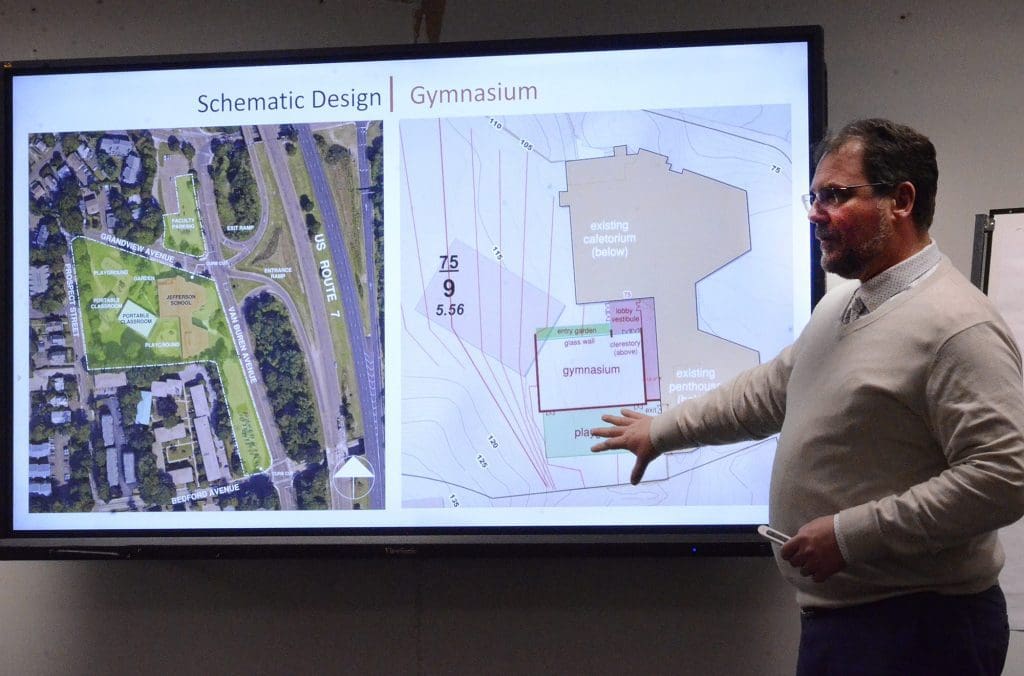 Michael LoSasso of Antinozzi Associates displays an overhead shot of the current Jefferson Elementary layout alongside a rendering of the developing concept for construction, Thursday in City Hall.

It’s exciting to read about the Jefferson School renovations moving ahead. I hope the architects keep in mind that the school is slated to be (or proposed to be) a second dual language school to alleviate the ELL stresses on the other elementary schools in District A. The architects should be aware of this in their designs to include language/listening labs (for each grade level, if space allows). Planning ahead is key to a successful program and to draw students in from other areas of Norwalk.