NORWALK, Conn. — Norwalk Common Council members are considering biting the bullet and awarding a $3.4 million city contract to a company whose name is, for some people, synonymous with a dishonest way of doing business.

The Grasso Companies LLC appears set to be awarded the lucrative paving contract at Tuesday’s Council meeting. It’s “Grasso” that is the problem: Grasso Commercial LLC, with the same Wilson Avenue address as The Grasso Companies LLC, was on Monday slapped with a $112,001 federal tax lien. The Original Grasso Construction, also with a 314 Wilson Ave. address, currently owes Norwalk $270,590 in property taxes, according to the city’s website and Assistant Tax Collector Al Palumbo.

The Council tabled the proposed contract a week ago because some Council members objected.

“Grasso… is in violation with the city and they have not paid on certain taxes,” Council member Travis Simms (D-District B) Simms said at the March 20 Council meeting, going on to mention Zoning violations. “… From my understanding, Mr. Grasso changed the company from his name to his son’s name to avoid these issues. I think that is a huge issue.”

“The opinion we got (from the city’s legal department) was they have satisfied the test to be a separate and distinct company. Therefore, we cannot hold them responsible for another company’s debts,” Finance Director Bob Barron said Monday.

Coppola was given a message but did not call NancyOnNorwalk to explain.

The legal department did extensive research into this Grasso, Coppola said at last week’s meeting, explaining, “To the best of our knowledge the bidder does not owe the city any taxes and is not in violation of any of the city rules or regulations.”

After a week to hear more about the issue, Simms on Monday was not mollified.

“I’m perplexed to why Council Leadership and Corporations Counsel has been adamant and literally forceful in pushing this through without properly vetting the concerns of the people, which really gives me great pause that something just isn’t right,” Simms said in an email. “Furthermore, to give a company a $3 million plus city contract, when it’s clear that they have not taking care of their financial obligations to the city is grossly irresponsible.”

On Tuesday, Coppola called that comment “completely not accurate.”

“The Corporation Counsel does not try to push the Council to retain the services of Grasso. Rather, the law department was asked to research certain issues regarding the bidder and report it back to the Council,” Coppola said.

He does not recall meeting either Grasso, Coppola said.

“I don’t know Joe Grasso, Jr., or Joe Grasso, Sr. I have no opinion about their work,” Coppola said.  “The Department of Public Works went through a process and decided to recommend awarding the bid to Grasso Companies.”

Norwalk in early 2015 created an ordinance calling for “responsible bidders,” with this excerpt:

Barron said Monday this was inspired by Tax Collector Lisa Biagiarelli’s concern for back taxes.

This year, with The Grasso Companies LLC bidding on a contract, Finance asked Corporation Counsel if it could distinguish that the son’s company is distinct from the father’s, Barron said. The answer was yes.

Barron said he understood that, “There was a twist where the son put the assets under yet another company’s name. That became a leasing company that leased the trucks to him.”

Google Veranda LLC and Grasso Construction is at the top of the list, with no mention of Veranda on the homepage.

Veranda is also current on all its taxes, Barron said.

“There was no question in our mind once the Corporation Counsel’s office determined that they were a new vendor,” Barron said. “We have the ability to disqualify a company if they don’t do a good job and then we have an ordinance to disqualify a company if they are delinquent in their taxes. But, since we have a history with him doing a good job and his company wasn’t delinquent in taxes, and he was the low bidder, we had an obligation to award it to him.”

It’s since been converted to Chapter 7 bankruptcy, Palumbo said, explaining that under Chapter 11 the company is reorganized and a debt repayment plan is developed, in which every creditor gets a percentage of what is owed to them, but under Chapter 7 everything is liquidated and creditors divide up the proceeds. If it’s $1, you split it.

Biagiarelli said that when Grasso filed for bankruptcy in 2009 the bill was probably $20,000. Taxes, fees and interest have added up while the company is under federal bankruptcy protection and the city is unable to take collection actions, she said.

“It’s called an automatic stay,” Palumbo said. “You basically have to ride out the bankruptcy.”

This Grasso company, The Grasso Companies LLC, does not owe the city, they said.

“It’s not necessarily semantics or a shell game. They are different legal entities,” Palumbo said.

Biagiarelli said she was looking at Norwalk motor vehicle taxes and there were probably 30 different iterations of Grasso on the list.

The SEEC lists 29 companies with Grasso in the name, including Grasso Donuts, a defunct New Haven firm, Grasso Brothers General Contracting in New Rochelle and Grasso Enterprises LLC in Bridgeport, none of which appear to have any connection to the Norwalk Grasso businesses.

Grasso Pavement Maintenance, an active company, is at 314 Wilson Ave. 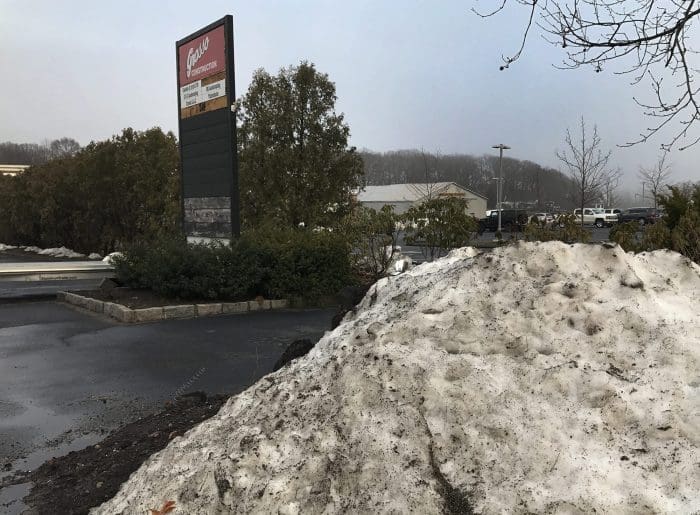 Crystal LLC owns 314 Wilson Ave. Palumbo said it’s common for a company to have the property under a different name.

The property would have been in the 2014 tax sale because it was delinquent, but the bill was paid before the sale list came out, he said.

When someone came in to pay the taxes, “I wasn’t dealing with any of the Grassos. We were dealing with a third person,” Palumbo said. “It was part of the reorganization.”

“There is a perception issue,” he said, explaining that the average person out of the street sees Grasso trucks and doesn’t distinguish the legal variations between entities. Then they may come into the city and say, “But you let them do this,” Palumbo said, explaining, “There’s more to it than what you are seeing.”

Simms, in his Monday email, said:

“Our city has one of the best tax collector’s in the country and to tie their hands by looking the other way is extremely unsettling.

“As you know our city ordinance precludes the city from entertaining or doing business with companies that are not in compliance or allowing them to participate in the city bidding process, until their financial culpable.

“Thus, by avoiding this process, we are setting an unfavorable precedent and putting developers and contractors on notice that if you have an financial obligation to the city all you have to do is change the principle or change the company(s) name, and you could do business as usual.

“Our residents elected us to be fiscally responsible and to make decisions that will be in the best interest of the city and taxpayers and supporting this submission would be totally contradicting.”

What the hell is going on here pay your damm taxs then you can bid. There is no way they should receive this contract. The Grasso’s don’t care about Norwalk. We should seize the property and put it up for auction.

I never thought I would say this, but for once I am in full agreement with Mr. Simms. The Grasso family is openly exploiting a loop hole to further pad their pockets. They are crooks. Other reputable contractors will say the same thing. If the city awards this bid then what remains of their legitimacy in the eyes of the city tax payers will be gone. Grow a set and draw the line, common council! If Grasso wants the bid then they should have to fight for it. How deeply has the common council delved into who established the new company? Who is listed on the bank accounts? Who is listed in the articles of incorporation? what Grasso is doing is tantamount to a straw purchase of a firearm. Completely corrupt and crooked.

What will be the responsibilities of this city paving contract? It was not mentioned in the article.

lets get new bids and eliminate Grasso and there switch games.

I agree, they are exploiting a loophole by setting up the separate company.

Whomever gets the bid… Maybe these contractors can fix all the curbs as well. When I’ve seen the paving projects done, I always notice that a majority of the curbs that need repair are not fixed. WHY?