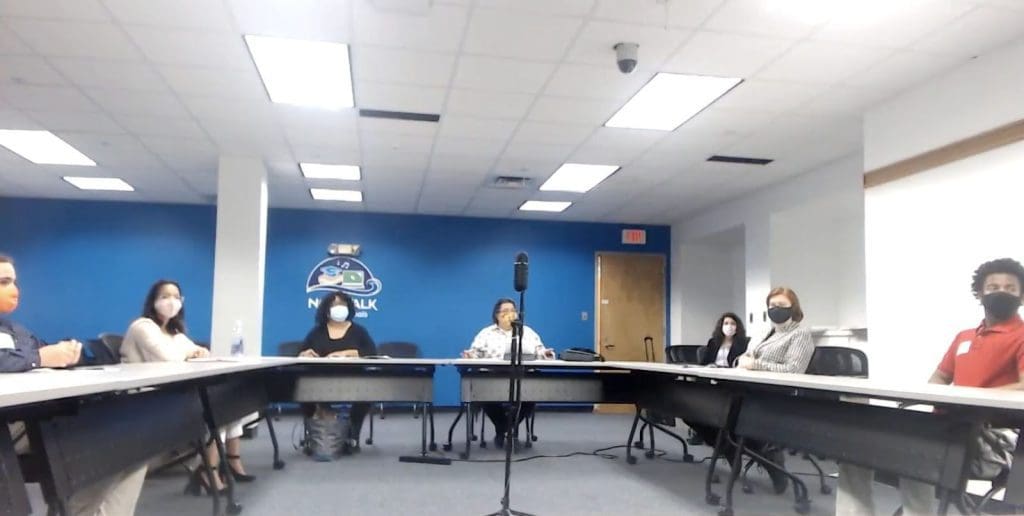 The Norwalk Board of Education Curriculum Committee meets Tuesday in City Hall.

NORWALK, Conn. – While the numbers continue to fluctuate weekly, Norwalk officials gave an update on how many students are attending school in person, in a hybrid model, and fully remote. The hybrid option is only available for middle and high school students, so elementary schools are either in person or online.

“In other words, they got two choices that they have been allowed so far—to be face to face (or remote), so they have the greatest number (of in-person students),” Sandra Kase, Ed.D, interim Norwalk Public Schools Chief Academic Officer, said.

Data on the breakdown of students that was collected last week showed that:

Board members received a fuller chart of enrollment numbers that was not immediately shared with the public or the viewing audience. Nancy on Norwalk has requested a copy of this, but has not yet received it.

Kase said that they expect the number of middle school students attending school remotely to be “increasing to a degree.”

Kase also said the numbers might not be entirely representative as students’ situations are constantly changing. For example, there are students who signed up for hybrid and are counted with the “hybrid” numbers, but have not come in for in-person learning.

“Even though they’re not officially identified as remote students, they are home, and tuning in from home, but they’re behaving as if they were remote children,” she said.

This was particularly true for some high school students, Kase noted.

The opposite has also been true, with some families starting remote and now wanting more in-person experiences. Board and Committee member Barbara Meyer-Mitchell questioned if there was room to safely accommodate students who wanted to come back to school.

“The superintendent has been very vocal, especially with the elementary schools with respect to the fact that they needed to be able to accommodate any student  who was learning in a remote way, who wished to come back,” Kase said.

Most of the return to in-person learning came at the elementary school level, she said, and some teachers made it work, by keeping desks empty in their rooms, reserved for students who were remote.

“In many of the schools we went to, they had desks that were empty, but with names of students who were remote,” she said.

Students with disabilities and English Language Learners have the ability to come in every day for full-time, in-person learning, Kase said, but not all have taken advantage of that. About 60% of students with disabilities are coming in every day, Kase said, with “very few” opting for the hybrid or remote models. For the English Language Learners, she said that not many opted to come in person full time.

Overall, 39 percent of English Language Learners chose to do a hybrid model, with 38 percent opting for full remote learning, she said.

Kase noted that they have seen cases rising in some of the schools, causing students and teachers to quarantine, and others like Brien McMahon High School that were forced to return to full remote for at least a few weeks.

“The superintendent I know has been doing her due diligence, and is indicating that she’s getting information from the health department that a lot of the new cases are happening from home,” Kase said. “So I know that she is and we all are encouraging, you know, trying to encourage parents to really bring their students, their children back to school.”

Kase said that there is a concern particularly in the middle and high schools about attendance for students, especially those listed as “hybrid” but not showing up for their in-person classes.

“What happens—how can we ensure that those students are active and they’re attending and they’re participating?” she said

The district has come up with an “attendance engagement intervention plan,” she said, that provides steps the schools can take to “ensure that we’re not losing children.

After two consecutive days of unexcused absences, the parents are contacted by the teacher, she said. If that contact is successful, the parent can explain why the student missed time and come up with a plan, such as being remote for a few days, to address it. If the reason is because the child is experiencing COVID symptoms, the school nurse is notified and the nurse remains in contact with the family to create a plan for them

If the contact with the parent is unsuccessful, then there are additional steps to get administrators involved, such as the building principal, who will reach out.

“If it’s still unsuccessful, then we get the social workers and the guidance counselors involved for calling and emailing parents,” Kase said. “And then if the parent contact is still unsuccessful after three more days, there is a wellness check at the student’s residence, you know, home visits, because again, we really want to make sure that we don’t lose children.”

One of the concerns raised by board members was learning loss for students during this time. Kase said the district is taking a few steps to ensure that students don’t fall too far behind including making sure they are teaching at grade level, providing additional help for teachers for technology needs, and bringing in additional in-class supports for students who might be falling behind.

“We’re talking about number one, sticking to grade level instructional content,” she said. “That is very, very important. Because if we look at students from a deficit point of view, and we only address the remediation and the gaps, the students will always be behind.”

The district is implementing “Tier One” instruction for students with gaps inside their classrooms, both in-person and remotely, instead of pulling them out and having them fall further behind.

“We’re not pulling children out of class this year to work with them separately,” Kase said. “We feel that it’s really important—this is based on research … it’s evidence-based. And we understand that the students will do better if they are supported in the context of the grade level instruction.”

This looks different for each student, she said, but for a student who is learning English, it could be bringing in a support staff member to work with them in their classroom to make sure they understand the material. In other cases, the teacher may separate the class into small groups—either in breakout rooms virtually or in-person with their chairs six feet apart, and work with them to make sure they understand the material.

The district is also beginning a curriculum audit, which Kase said will ensure the teaching materials have standards and skills that are important.

The audit will be done both in-house and with “outside support,” Kase said.

“We also want to make sure, as you will hear with the students today that again, not only is the curriculum accurate, but that it has, as we said, that it encompasses various viewpoints, that it’s not being told from the viewpoint of one person—one of anything—and that it really gives students the opportunity, as our students will be able to demonstrate, our students the opportunity to really think, to really think critically, and to really make decisions and understand a variety of views.”

Four students, three from Norwalk High School’s P-Tech program—Isaiah Asmani, Alexis Levy, and Katelyn Negron—and one middle school student, Laszio Balazs, demonstrated how curriculum with critical thinking skills and opposing viewpoints could be put into action. The students were given a topic to research, in this case the electoral college, and come up with points to support its existence or argue why it should be abolished.

Kase said they want to have the audit completed as “quickly as possible.” While she didn’t have an exact date, Kase said they hoped that “by the middle of the school,” they would at least be finished evaluating the curriculum to make sure it had the three main pieces of: accuracy, being culturally relevant, and having multiple viewpoints.