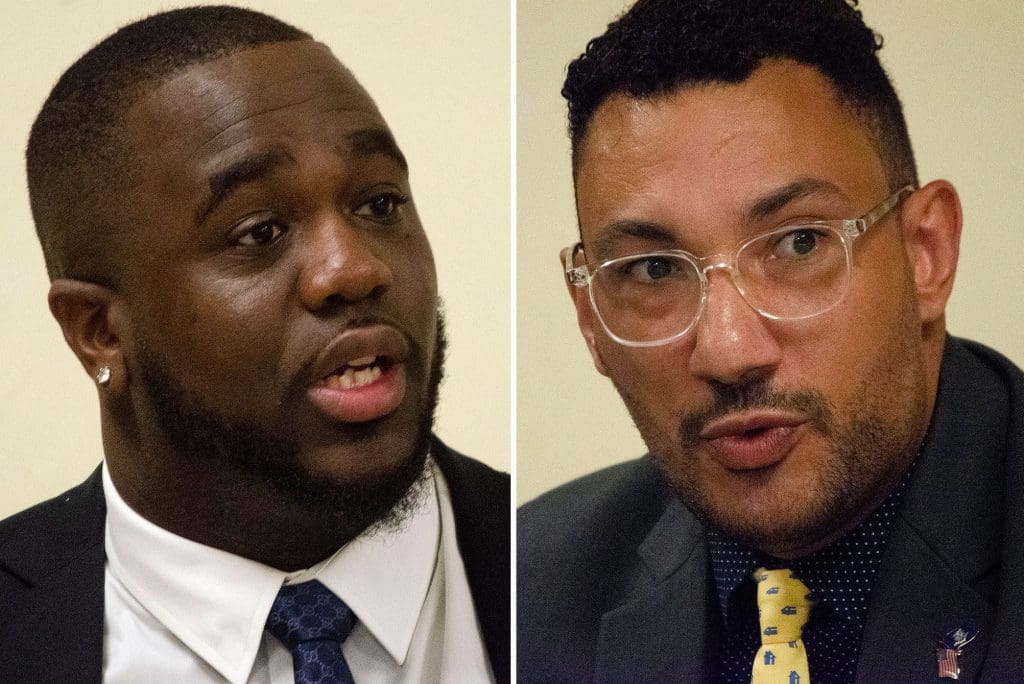 Democratic candidate Kadeem Roberts and Republican candidate Luis Estrella seek to win the seat now held by Chris Perone, a Democrat. District 137 is entirely in Norwalk, though under this year’s redistricting its geographic boundaries have shrunk.

Answers to questions in the League of Women Voters debate, held Monday at Cornerstone Community Church, were brief, and Estrella said twice that he didn’t want to “make up” answers. The candidates agreed on many topics but some contention arose when moderator Jean Rabinow asked about the police accountability law passed two years ago.

Roberts denied that the Working Families Party wants to defund the police and said members include police officers.

“Community policing is very important within the city, and within the state,” but many Norwalk police officers do not live here, Roberts said. Since “a lot of people are nervous and scared of police,” they need to “hold not just a block party, but more so community events” and “come into the neighborhoods that people are fearful of and actually sit down and talk to them one by one.”

Estrella said he goes to “dozens of events in a week and (Norwalk Police) are always there.” NPD officers were present when Roberts marched down Interstate 95 to keep him safe.

The marches were inspired by the death of George Floyd, Roberts replied. “I actually lead those marches, I actually sat down and talked to the police officers, as well.” If Norwalk Police are at events it’s because they’re getting paid to be there, he continued. “To be present is one thing, but to actually be in the environment of the people and fellowship with the people and speak to them is another thing.”

Roberts served one two-year term on the Common Council; he did not run for reelection last year. His biography touts him as the youngest African American in Norwalk’s history to get elected to the post.

Estrella’s bio describes him as “a home grown advocate, whom sits on the board and volunteers with several community organizations in order to truly make a difference in Norwalk.”

Roberts is a lifelong Norwalk resident; Estrella said he grew up in Patterson, N.J., has lived in two countries and three states, but chose to live in Norwalk in 2000.

The debate commentary touched on differing perceptions of the electorate, as discovered through door knocking. Roberts said he hears about gun safety, women’s rights, and inflation. Estrella said everyone he’s talked to speaks about it being difficult to pay bills, plus, people don’t know who their State Representative is.

In reply, Roberts touched on affordable housing. He agreed he’s heard about inflation but “most importantly,” gun safety.

Both support women’s reproductive rights, though Estrella said he didn’t understand why some people say they’re in danger in Connecticut.

“It’s already a state law. Not a single candidate has said that they would repeal that law,” Estrella said.

“Well, actually, over the past several years, there’s been about 30-plus bills implemented by the Republicans … that can affect women’s rights and women’s rights to choose,” Roberts replied.

Estrella asked if the bills were trying to repeal women’s rights or were “something that effects it.” He said, “Very big difference there.

Both supported the state funding social emotional learning (SEL) in the schools, but Estrella said it shouldn’t come before math and English instruction.

They agreed that Connecticut’s elections are fair. Estrella added that he’s worked the polls and seen the electorate, suggesting that younger voters should be encouraged to come out.

“I personally do not know the educational cost sharing formula. I’m not going to make anything, anything up on that,” Estrella replied. But cutting state costs would provide money for education.

Rabinow asked how they’d balance Connecticut’s urban and suburban needs if they got elected. Estrella said District 137 has distinct areas with different characteristics, be in the comfortable financial status of West and East Norwalk or the lesser fortunes of Wall Street. Roberts said he wants to push small business and organize town events. He promised to hold town hall meetings.

Estrella asked, “Where was all this energy when you were on the Council?”

Rabinow noted that they both work and asked how they’d make the time to serve in the Legislature.

Estrella said he’s self-employed with a business that basically runs itself, really requiring his attention only one day a week. He works part-time for the City, “so my schedule is clear and open to invest the time that it’s needed to represent Norwalk.”

Roberts said he’s “always had the time” to serve, stressing his Council service. He also mentors youth and works with businesses.

“I’m actually the only candidate here at this table is actually involved in their community,” Estrella replied. “I help out everyone in my community in every single way that I can. I sit on a dozen different Boards and Commissions to actually get things done here in the city. And I’m not just saying, you know, ‘if elected I’m willing to do something,’ I’m currently doing it.”

Two thougts:
1) Here’s one Estrella who can actually be a positive for Norwalk
2) The last Democrat to represent 137 disgracefully barely showed up for committee assignments in Hartford. Has the Democratic Party supplied Roberts with directions to the State Capitol??

I fully support abortion rights. What I don’t support is the chain rattling around abortion rights in Connecticut this election season. Can someone please point me to these “30 bills” that we are suddenly hearing Republicans have introduced to limit reproductive rights in CT? Show it to me.

I welcome any of our legislators to help with this, though I won’t hold my breath. I would have loved to ask the question during the LWV debates, but though audience members were provided pink index cards for questions, none were solicited or accepted.

Nancy, how to fact check this?

In July Connecticut passed a law that protects abortion rights even in the absence of Roe v. Wade – a law that has been heralded as a “model” for other states. The bill, 5414, had support – and opposition – from both Democrats and Republicans. It’s a nuanced story on the local level, and it’s disheartening to see it reduced to party-line propaganda by both sides.

Luis came across as honest and authentic. He truly cares about serving Norwalk. While a bit nervous at first, he gained strength & confidence as the debate progressed. Nice job Luis!

As a reminder to the voters of the 137th that the district essentially had an empty chair in Hartford for years, below is from a letter to the editor that I submitted to The Norwalk Hour, which was published on 10/20/20

“Even more concerning is Representative Perone’s attendance record on the General Assembly’s Energy and Technology Committee, of which he is a member. Given the disastrous performance of both Eversource and United Illuminating in the aftermath of Tropical Storm Isaias as well as the fact that, according to most recent data from the US Energy Information Administration, the residents of Connecticut pay the 4th highest average retail price for electric power in the nation, it is critical that the citizens of the 137th have a reliable and committed voice on that Committee.

The Energy and Technology Committee has conducted four meetings in 2020, including one on August 26th to address the issues related to Tropical Storm Isaias. Representative Perone was not present at any of these meetings.”

The voters of the 137th need to elect a candidate who will represent the district 100% of the time, and that candidate is Louis Estrella.

This one is easy. Roberts walks away with this – but, is that good for Norwalk?

Estrella is red-meat for the R’s for sure – they legitimately believe the growth of the Latino demographic in Norwalk bodes very, very well for the GOP. They tend to lean right, as many have direct experience with the lie that more corrupt government is good. It’s just – can they vote?

What Louis failed to learn (I spoke to him outside Tracey the last election) was simple math. The R’s can’t win in Norwalk with a straightforward partisan food fight. The D’s have double the soldiers. Hence – 15-1 and 9-0 BOE. More on that.

The R’s – locally and nationally – need a coalition to succeed. Locally – that would mean attracting U’s and I’s. Except – when you want them to help you – but – you won’t help them. The middle is forbid. It’s a 1-way street. That’s a Louis street. He should eat these words – because it’s why he loses in November. Sorry.

The sad part? Could anyone of any political affiliation really comprehend that after this election, we’d actually miss (missing in action) Chris Perone? You can’t make this stuff up.

I like Louis he’s a good man but I wish the Republican party was more strongly pro life✝️ The democratic mafia party knows nothing except a passion to be able to kill the unborn 🥵👎🏽if we don’t protect the unborn babies who will?😩🐣🙏🏼

I’ve met both Estrella and Roberts. I challenge anyone to convince me that either of them aren’t reasonable, decent guys who are each acting in good faith. I think they should stay in their district and even work TOGETHER to find ways to advocate for the people of that district. They both have endearing smiles and couldn’t help but nod in agreement with each other on many of the issues.

However, the RTCs and DTCs should both do some reflection to have encouraged these men. This debate is a mess for both of them. The teams behind them either don’t know or don’t care that it’s really unfair not only to both of them but also the voters to offer them up. You can decide which is the more repugnant offense.

Sadly, those who yearn for simpler times in Norwalk – those fans of Barry Goldwater – can’t seem to break patterns no matter. Not all local GOP members are troglodytes – but there remains a stubborn few who can’t seem to understand the concept of a coalition – the same who call for blood oaths and purity tests.

The ironic outcome for these relics is – you embrace a strategy that has been the recipe for losing locally at the polls for the past 8-10 years. Watch it happen again this year. Recycle, repeat. That makes you a good friend to Harry Rilling and Eloisa Melendez, but surely not to me. Enemy? Look in the mirror.

@Patrick Cooper: Funny you mentioned Barry Goldwater. That was back in 1964 when those of us in the Baby Boomer generation were just becoming eligible for the draft and the sitting president at the time was going around the nation saying in a Texas drawl: “I will not send American boys to fight an Asian boys war.” How did that turn out? Nearly 10% of the Baby Boomer generation (2.7 million) ended up serving in Vietnam (including this troglodyte) and 58,281 did not make it back and those that did were spat upon. While I am happy to see that Lisa is making an effort to revive the Independent Party, that party has not been a factor in Norwalk politics for a very long time and, BTW the Norwalk Republican Party did in fact cross endorse Lisa for Mayor in 2019 so you really don’t know what you are talking about. FYI: When this troglodyte cave dweller looks in the mirror, he sees someone that served this country in the military.