Moderator Darius Williams began the forum by asking the candidates for their two top priorities.

Kydes, who repeatedly went past the time allotted for answers, stressed that he’s proud of his eight years on the Council, and listed achievements including “the lowest tax increases that the city’s seen for decades preceding.”

McMurrer, who won a primary to get onto the ballot, said her top priorities are communication and “the future of Norwalk,” particularly via an amicable relationship between the Board of Education and the Council, and also environmental concerns.

Goodwin said he has a “goal and a mission” to “ensure new development pays its way and puts quality of life for residents in the area first.” He took multiple shots at Kydes, beginning with, “He neglected to mention that (the very minor tax increase this year is) only because of federal intervention, because of federal funds that were given to the state and then therefore to the city to help us offset the budget deficit.”

Auerbach listed communication as a priority and suggested that the City get back to holding “live” meetings rather than Zoom gatherings. Development is an issue.

“We’re just bringing in more apartments, we’re getting rid of businesses and bringing more apartments and it’s just I want to be the voice for the citizens in East Norwalk and Norwalk,” Auerbach said.

Kydes on the defensive

A League request to name the district’s most pressing issue led to another jab at Kydes.

Goodwin said the Transit Oriented Development (TOD) plan had inspired him to run, as he felt residents’ desires were ignored in favor of encouraging development.

Kydes advertises “on his website as a badge of courage” that he helped make the TOD plan happen, Goodwin said.

Kydes said he doesn’t have a website and as far as promoting development over the years, “a lot of things have fallen … at my feet as if I had … played a major role.”

Kydes has served as Planning Committee chairman for nearly six years. He said things are being stated on social media as fact and said people should go on the city’s website to read the TOD plan.

Toward the end of the forum, Goodwin shot back.

“I have no political aspirations,” Goodwin said. “I think we’ve all said that tonight, except for one person who, I apologize, your website is actually Kydes for Mayor. So that may be why I misunderstood.”

McMurrer said she agreed with Goodwin, the most pressing issue is development and traffic.

“I think though, that there are always two sides of every story and then there’s the middle. So I don’t think that the East Norwalk village TOD is necessarily talking about these monstrosity buildings that Mr. Goodwin is alluding to. I think it’s really talking about developing in a smart way around the train station,” she said.

She said, “I also think that what the area looks like should … drive zoning not the other way around…. But I also think we need to have specific rules in place for these developers to come in and play in our neighborhood.”

Developers are getting “huge tax breaks” and “New York cars all over the place,” he said. “…Just because something is OK to do through zoning doesn’t mean it’s right. Maybe we need to say change some of the zoning or maybe not make it as easy.”

Kydes said, “To everyone’s point, and some East Norwalk residents, population growth in East Norwalk has become overwhelmingly crowded, no doubt. I do think that there’s some good that can come out of the TOD zone. I think we have a lot of spot zoning, a lot of development that doesn’t hold the aesthetics of a seaside village district, you can see it. I think putting a plan into place that that limits everyone and puts the architectural design behind any new development is a good idea.”

In rebuttal, Auerbach said, “I’m also a commercial real estate broker in town and I’ve brought numerous businesses and at one point, the Methodist Church by the cemetery was for sale. And I was going to bring in a developer and do a small little development of maybe 45 to 60 apartments, three stories, stepped back. And the city said, ‘Oh, TOD  is never going to come into Norwalk.’”

McMurrer said there are positives to TOD, and “the city is ready to incentivize the land owners that are currently there to improve their properties.”

While that’s true, residents said they didn’t want buildings higher than 2.5 stories and the TOD plan allows for an extra 10 feet on what would be 35-foot buildings in exchange for “public art” or a “water fountain,” Goodwin said.

Williams asked about the funding “cliff” that Norwalk Public Schools Chief Financial Officer Thomas Hamilton has warned about, given the use of federal COVID-19 funds to keep the tax increase low instead of granting NPS more of the increase it had been seeking.

“What is your view on how to properly fund our schools?” he said.

Auerbach said he’d heard there’s an efficiency study of the Board of Education and the City underway.

“I would think would be important is to work with the Common Council very closely to make sure that the money that we have coming in is well spent,” Auerbach said. “And part of that is with the development, like I was saying earlier, that if you’re getting rid of businesses to put apartments and you’re losing those tax dollars, we need to bring businesses in.”

As far as the term “fully funded” goes, “I just want to remind everyone that you can never give the Board of Education less than you did the year before,” Kydes said. As a parent, he’s heard both sides. “I’m very happy to have the insight I have now and to how the budget process works and also the what the end result is in the classroom.” 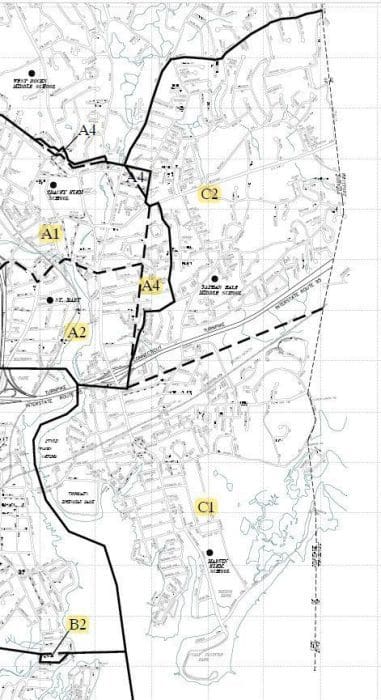 District C, as shown in a city Councilmatic District map. The full map is attached as a PDF.

He said, “I believe there are systematic problems with the Board of Education and their spending. I think we’ve had a problem with the revolving door of superintendents.” He expressed support for Norwalk Superintendent of Schools Alexandra Estrella as she’s no “cookie cutter” but is “vested in the community.”

He said, “We’ve given the Board of Education, record breaking increases nearly every year I’ve been on the council. I’m proud of that. I hope I will continue that.”

Goodwin spoke of “giving developers tax breaks” resulting in small business folks and homeowners funding the schools. “Renters aren’t funding our schools, which means that burden then goes either to homeowners, or small businesses, or we do have to cut funding.”

Kudos to Kydes and the team that went for an efficiency study, Goodwin said, alleging that Norwalk is shortchanged in State funding for education.

McMurrer said, “I think we have some of the best teachers and best staff in the world, and I would do anything for them. I think that I do agree with Mr. Kydes. I don’t like the revolving doors of superintendents.”

She said, “The efficiency study is much needed. But I want to clarify that it’s both on the city side and the Board of Education side…. I’m glad to see that the Board of Education and the Common Council are meeting more frequently ahead of the budget cycles so they can get ahead of some of the needs that are coming down the pipeline. I think communication is key. I think transparency is key.”

In rebuttal, Kydes explained that tax incentives actually result in boosted revenue to the city. Later, he stressed that his experience is needed on the Common Council, given that there will be many newly elected members.

Correction, 1:38 p.m.: Goodwin spoke of the extra height allowed in exchange for amenities, in the TOD plan.

All these new candidates that haven’t lived in Norwalk for long want to pay for everything but aren’t talking about how the city is going to pay for it. Politics is such a smoke-and-mirrors game. I give credit to Kydes for standing his ground and educating these people.

Regarding “TOD is never coming to Norwalk” as quoted by Mr. Auerbach when recounting his attempt to put together a “small” development deal: Norwalk already has at least one Transit-Oriented Design area. It surrounds our South Norwalk train station. The relative merits of a particular TOD proposal is absolutely worthy of debate.

Joseph, I hope you’ll consider voting for candidates based on facts and not whether we went to elementary school with you. While you consider us “new” residents, I’ve lived here for 16 years, Mr. Auerbach spoke of living here all of his life, and Jenn McMurrer, according to her site, has lived here for the eight years Mr. Kydes has been in office.

Further, I don’t think there were any smoke and mirrors last night from the challengers, nor talk of expensive proposals without addressing funding challenges.

Instead, if you want to talk smoke and mirrors, look no further than your favorite candidate speaking of success in not raising taxes, while ignoring that federal relief money was the secret ingredient that made up the shortfall. And with $39 million more available from ARPA, the council met last week to hear how a large chunk of that would be used over the next two years to keep their campaign promises.