Moderator Mary Oster began the forum by asking the candidates for their two top priorities, or, for the incumbent, what he’s done for the city.

Oster asked the candidates what the most pressing issue is for their district.

Alterman said that based on her experiences going door knocking and as a nurse, mental health is on everyone’s minds. She’d like to advocate for expanding current programs and would work on collaborating more with private sector companies.

Keegan said it’s “basically quality of life issues, including traffic and the walkability of our neighborhoods.” District D needs more sidewalks and traffic laws need to be enforced. In addition, drivers need to be educated.
Dunn spoke of development, alleging that clear cutting has led to flooding. “We need some flood mitigation for some of those houses that have been impacted by some of that the development that’s going on,” she said, also mentioning speeding.

Jellerette said residents are talking about traffic and speeding, it’s a “hot button,” and smart planning can lead to traffic calming.

Given the chance for a follow up comment, Alterman agreed that walkability is a major issue. “I’ve done research papers on this, it is really important to me,” she said.

Dunn said she’d spearheaded the resistance to a BJ’s Wholesale Club on Main Avenue, “So I think we need to do a much better job of planning and not just voting yes, or rubber stamping every new development that comes along and plan better.”

Vision for the future?

Oster asked the candidates what they see as Norwalk’s future in 10 or 20 years.

Keegan said he wished the Wall Street area was more active and with proper planning and collaboration between the Council and the Redevelopment Agency, “that is going to happen.” 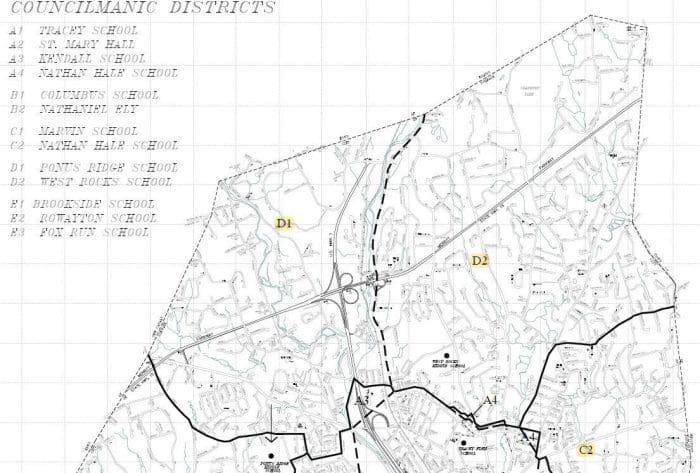 District D, as shown in a city Councilmatic District map. The full map is attached as a PDF.

He said, “I think our waterfront is second to none. We have beautiful harbors. We have active plans to make our waterfront even better.” Better internet would be good and, “Maybe it’s time we have a conversation with our federal, our state partners about Manresa Island. I think that is a resource that has not been tapped into. And if we’re talking 10 years out, I think it’s time to begin talking about Manresa.”

Dunn said, “I really look forward to is increasing the diversity in a lot of ways in the city. I really want to see more diversity in our housing options. I you know, I feel like our bigger houses are getting bigger and you know, small apartments and things are getting smaller.”

Jellerette said, “I’d like to see a more unified city.” As Norwalk Historical Society director, she’s very familiar with Wall Street and, “they are really working on trying to make that a real downtown… but it takes time and also looking at zoning regulations that no longer fit.”

Alterman said she’s a relatively new resident and she and her husband have three biracial children, so “when people talk about diversity, I think I might think about diversity in a different way.”

She’s looking for is “way, way, way more community engagement.” She grew up in Memphis, Tenn., and “I am still a little bit confused as to it seems a small core bunch here in Norwalk that are really invested in politics…. I would love to see more people getting involved.”

Oster asked about the funding “cliff” that Norwalk Public Schools Chief Financial Officer Thomas Hamilton has warned about, given the use of federal COVID-19 funds to keep the tax increase low instead of granting NPS more of the increase it had been seeking.

“What is your view on how to properly fund the Board of Ed?” she said.

Dunn called that a “landmine” as she is a Norwalk Public Schools teacher. “I’d love to totally fund everything in anything we ever could possibly dream of,” she said.

“Heidi was talking about mental health issues, it’s really concerning to me, at the high school level that we only have 1.5, psychologist for almost 2000 students,” Dunn said. Collaboration with nonprofits can help with the schools’ budget. She added, “We do not get the funding from Hartford that we need.”

Jellerette said she’s thought out it and the budget line items, and, “I think there was a disconnect on what the Board of Ed thought they needed and what the city had allocated in terms of money. So right now, I feel that we have two years to really take a look at what is being spent on the Board of Ed.”

She also spoke of collaborating with outside agencies.

Alterman said, “I am a big proponent of as much money as we can give to schools and students, I think we should do that. There’s a big need for cyber security in our school system and without giving them a way larger increase in budget, there’s no way to do that.”

She also suggested, “there are ways to look at different areas to bring in more revenue” and said the budget vote this year was one of the reasons she was inspired her to run for the Council seat. “I am so grateful for the last eight to 10 years where it has been funded. But I’ve heard people from all parties talk about how we need more.”

Keegan clarified that “by state statute, you can never lower a public schools’, or Board of Education budget, from year to year.” He’s also a “big proponent” of private/public partnerships and thinks NPS does a great job with that.

The efficiency study on both the City and Schools side of City Hall is beginning and he believe it will find savings, he said. “No one believes more strongly in the school system that myself and to fully fund the public schools, I think is a goal of every Councilman, and but we have to weigh it against the needs of the rest of the of the city.”

If you live in District D there is a CLEAR Option..Tom Keegan has been a rational, forward thinking voice for this district. He is constantly working across the aisle and getting things accomplished on the CC. He has very much earned the trust and and has the dedication to not only his district but all of Norwalk!! VOTE TOM KEEGAN!!

Would like to see more interaction with the public including better notification of events both recreational and political, including these debates.
We have also had numerous floodings in our neighborhood including loss of 4 cars and damaged homes, in past storms. Our homes are not in a flood zone and not covered by our insurance. No one from town seems to want to address this issue.
Anyone running for office have any comment on this?

Ms Brennan we have been working with Public Works in both the operations division and the engineering division to mitigate flooding in several parts of the city. This is an ongoing project and with the release of federal funds (ARPA)the city intends to spend upwards of $15 million to help with flooding. I’ll be happy to discuss all of these issues with you my number is 203-673-6265

If we had more Keegans and less BS artists we’d be in better shape. Regarding Diversity which was brought up – Keegan lives diversity. Ask everyone he’s interacted with in Norwalk. Many young men of all ethnic groups learned discipline and respect from Coach Keegan. We can use a little more of that these days
Maybe our Board of Ed should ask Tom why so many kids and parents appreciated his leadership.
Heather Dunn seems like a good egg. She’s a teacher who doesn’t want to expand on our weak Board of Ed..Step up or Step out.
Dems above talk about school issues and the money needed to do more. Easy to campaign on spending more money. I can’t take those candidates seriously. A true leader will tell us how to do more with what we have.
Is that too much for a taxpayer to ask?

Shari Brennan – to address flooding, you and city officials, should look into the authorizations created in the recent legislative session by passage of HB 6441 AN ACT CONCERNING CLIMATE CHANGE ADAPTATION. HB 6441 implements a plan from the Governor’s Council on Climate Change to provide Connecticut’s towns and cities with the resources needed to effectively fight climate change. One provision invites towns to appoint a Stormwater Authority to better address stormwater management. I for one would be impressed by candidates and officials willing to explore options under this bill. Also, I thank Norwalk Conservation Commission Chairman John Moehling for bringing attention to it.