NORWALK, Conn. – District E Common Council candidates met online Thursday for a discussion hosted by the League of Women Voters of Norwalk, a forum that focused on climate change and flooding concerns. The incumbents denied they are “rubber stamps” and said their ban on plastic bags has produced results.

Moderator Laura Smits called it a coincidence: many of the questions touched on environmental issues. And as with all the other League forums, the conversation started with asking the candidates their top two priorities, or if they were incumbents, what their achievements have been.

“The first thing I would do would be to welcome all district residents into the club,” Schneider said. “Because I don’t think there’s a lot of transparency. I haven’t heard a lot from what’s happening in our district from our Council members.”

She would also “advocate for Norwalkers and do what is best for Norwalk so we can continue to love living here be able to afford to live here.”

“Climate change is permeating every aspect of our city life,” said Shanahan, who is finishing her first two-year term on the Council. “We really need to create an Office of Sustainability with real enforcement teeth to inform our work.”

With flooding a concern, “we need more engineering studies, some of which are already underway, to better understand our waterfront resilience, as well as the as our rivers and watersheds,” she said. She also stressed “livability,” sidewalks and bike paths to connect neighborhoods, and new planning and zoning regulations. “Part of livability is affordability,” she said, connecting this to keeping taxes reasonable while funding the school system.

Not among his priorities are “third party forces” and “using the municipality’s piggy bank to develop properties that no one’s asking for.”  He’s met many people while running for office and they are “raving fans about living in Norwalk,” he said. But, there “tends to be some friction. And that friction is dependent on which part of the district you meet. It might be overdevelopment, it might be over occupation, it might be traffic, it might be schools or buses. It depends on the part of the district.”

Livingston is finishing his sixth year on the Council and his seeking a fourth two-year term.

“I think the most important issue facing the city going forward is climate change and sustainability,” he said. “We have walked and met and talk with neighbors throughout the district. And without fail, the number one issue that people are raising is flooding that that is pervasive throughout all of our district, up Five Mile River, down in Rowayton. All over.”

As for accomplishments, Livingston said he’d help bring a ban on straws, stirrers, Styrofoam and plastic bags, “all of which have significantly helped to reduce waste in the city” and saved taxpayers money because those items out are of the waste stream.

“It seems that if there’s ever any variation of more than seven degrees Fahrenheit in the weather, everybody starts screaming ‘climate change’ and ‘Chicken Little’ and all this,” he said, explaining that he didn’t know there was a City Council until it started banning plastic. While well intentioned, it may not have been effective because the people he’s spoken to say their plastic consumption has skyrocketed.

Livingston said it’s had a significant impact, as “for example, in our recycling systems, that used to be the plastic bags would get tangled in the machinery. That no longer happens.” The beaches are cleaner and, “I just did a cleanup myself along inner harbor and found a lot less straws and plastic bags, as did others.”

Shanahan said they’ve heard from oyster farmers that “they’re no longer having to clean their engines from being fouled by plastic bags in Long Island Sound.”

Smits asked about the funding “cliff” that Norwalk Public Schools Chief Financial Officer Thomas Hamilton has warned about, given the use of federal COVID-19 funds to keep the tax increase low instead of granting NPS more of the increase it had been seeking. “What is your view on how to properly fund our schools?” she said.

Shanahan said there were misconceptions embedded in the question, as the Council sets a budget cap and the Board of Estimate and Taxation decides how much money goes to the school district. And under state law, funding to the schools cannot decrease from the previous year’s total. 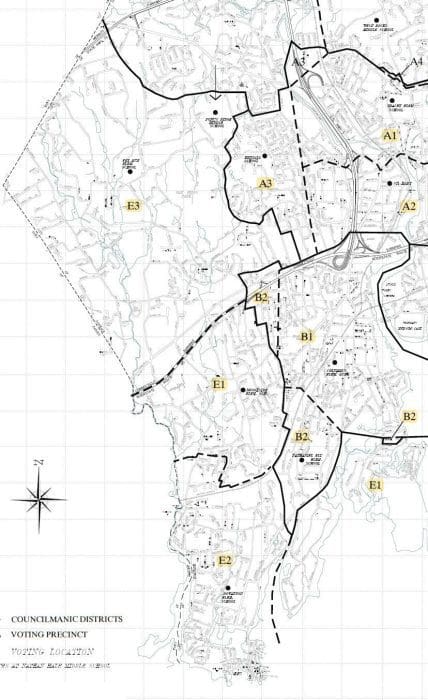 District E, as shown in a city Councilmatic District map. The full map is attached as a PDF.

As for the “cliff,” she said, “I don’t think that our hardworking Norwalk taxpayers would want us to charge them extra taxes now for future and unknowable operating expenses of the Board of Ed several years hence. So I think that we’re going to have to deal with these issues as they come.”

Anello said that as a Fox Run Elementary School Governance Council member, “I don’t really hear a lot of complaints about ‘we don’t have enough money,’ where I see most of the activity is going towards strategy” toward dealing with the learning loss the kids have suffered during the pandemic.

Schneider said, “Our schools need a lot of help. My son started off his high school year with no Spanish teacher for a couple of weeks. His biology teacher is leaving.”

Norwalk is shortchanged when it come to state funding, and with an increasing population, “We need to hire more teachers to ease the burden on the teachers that are already so incredibly overwhelmed,” she said.

Livingston spoke of the recent lawsuit that challenged the state’s education funding, which “unfortunately… we didn’t win. The formula has been adjusted, we’re getting more, but it’s clearly not as much as we deserve.”

“I think the hardest part of this job is when we sit down at budget season every year and try and decide how we’re going to spend our tax dollars, because every decision affects taxes one way or another,” Livingston said. “…We do our best, I think we have managed to make good decisions in the past. The school district is getting more money, historic increases over the last eight years. And we do support them very strongly.”

He also spoke of the efficiency study that’s under way and Mayor Harry Rilling’s plan to use American Rescue Plan Act (ARPA) funds to “minimize the so-called cliff.”

In rebuttal, Anello said he’ll be amazed to see what efficiencies are found and suggested that it would be nice if families could take their school funding to whatever private school they chose.

In closing statements, Schneider said, “I will be mindful of every decision that is made and how it will benefit the residents of District E versus blindly ‘rubber stamping’ along party lines. In other words, we need to have balance on our Council, balance on our Board of Ed balance in our city. We should not have 24 out of 25 people in the city who are voting the same time at the same way at every time.”

Livingston said that he’s also worked to update Norwalk’s tree ordinance and led the effort to merge the Planning and Zoning Commissions.

“As chair of the Land Use Committee, I’ve helped oversee in excess of $200 million in school construction projects,” Livingston said. “But I’m also not afraid to stand up for what I believe, as I did when I voted against the initial POKO project. By the way, if this is rubber stamping, then I don’t know what that term means. Miss Shanahan and I have worked tirelessly to address resident concerns, be it traffic, sidewalks or flooding, to name just a few.”

Shanahan said, “I’m proud of my record as a Council person who’s led the city in addressing and adopting more sustainable initiatives… I brought the idea of a tree summit to the city.”

“We have pro-actively been advocating for a more walkable city,” she said.  “I sit on the harbor loop SoNo work steering committee, and we are working to add new sections to the Riverwalk on the east side of the Norwalk River…. None of these initiatives are passive adoptions of the mayor’s agenda, but rather the work of an engaged council person who has the best interests of her district and her city in mind.”

Anello said, “I think what we have are some very different points of view of what Norwalk is gonna be, do we want to be Stamford, or do we want to be Norwalk … like I say, what I’m hearing is, is there’s a few issues that want to be addressed and the best I can give you is a commitment to listen.”

District E1 (voting at Brookside School) has two parts. The council map included in the body of the article does not include the other part of District E1 (Harbor View and Wilson Point). It can be seen in the full map PDF shown in the file link at the end.
Stuart Wells, Registrar