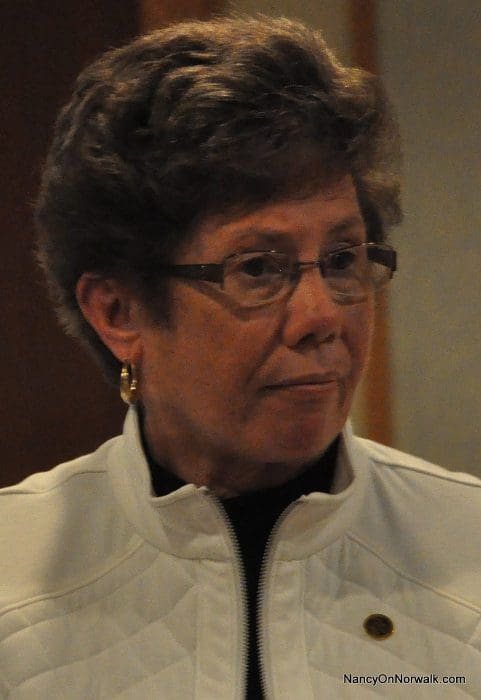 NORWALK, Conn. — Calls for Karen Doyle Lyons’ resignation continued Monday, in the wake of a Facebook post considered by many to be racist.

Doyle Lyons said she stands by her comments: she has no intention to resign or retire, although she reportedly initially agreed to do just that.

Doyle Lyons is under fire for a Facebook comment, “No more Black History Month because many of us know more then many Blacks.”

She maintains that her detractors have “cut and pasted” the comments, leaving out her later explanation: “I am just saying study, learn not just one month but all year. I do and so should many others.”

Duff said, “Her comments on Facebook are racist, lack moral leadership and are extremely concerning in the context of her current position as an election administrator. I’ve long been concerned about her ability to conduct fair elections because of her improper views of voter identification laws. Norwalk voters would be rightly concerned about the August 11 primary and November 3 elections if Mrs. Doyle Lyons has a role. Turnout for the general election is expected to be very high this year and voters need to have confidence about the execution of a free and fair election. Mrs. Doyle Lyons has shown what’s in her heart and voters surely will not want her to use the power of her office to turn that into reality.”

The Council called the comments “insensitive and racist.” Dathan said they “reflect insensitivity and ignorance about the state of racism today.”

“As our community works together to bring an end to racism and injustice, there will be no tolerance for inappropriate statements from those elected by the people to be fair and impartial. Karen Doyle-Lyons’ comments demonstrate deeply held beliefs that bring into question her ability to treat all people equally and justly; therefore, she must resign now,” the Council said.

“We must work together to bridge the differences and correct injustices that have been inflicted on the Black community,” Dathan said. “These challenging times call for leaders, especially those holding public office, to lead by example and realize that people do pay attention to the words we say and the comments we make on social media.  Public service requires that we are attuned to the needs of the people we serve, even when we disagree on public policy or views. The Registrar’s office must stand for integrity and respect the rights of all voters. I hope that Ms. Doyle Lyon will do the right thing and re-submit her resignation.”

Dathan is being challenged for reelection by former State Rep. Fred Wilms, a Republican; Wilms said Tuesday that he agrees Doyle Lyons should resign.

“Public servants need to lead through their speech and actions. Because the Registrar of Voters is central to the electoral process, which is in turn central to our democracy, that office needs to command our highest level of public trust,” Wilms wrote. “Karen’s comments were hurtful, divisive and completely unacceptable. Because of them she has lost that public trust.  She has no choice but to follow through with her previous resignation.”

“The comments made by Karen Doyle Lyons were completely inexcusable and will not be tolerated in our community,” former Republican Mayoral candidate Kelly Straniti, a State Central member said Tuesday. “I was glad to hear that she has resigned her positions as Registrar of Voters and on the Republican Town Committee. Those type of attitudes are not reflective of the City of Norwalk or the Republican Party and her resignations to both are the only resolutions. Everyone should feel welcome and accepted when dealing with the Registrar of Voters, it is a position of public trust and that must be upheld.”

She said, “I don’t know what the process is for the City and her position as registrar and how they will need to handle her attempted revocation  but I do that that her resignation to the RTC cannot be rescinded. She resigned in writing and her resignation was accepted.”

Crosland, then a newly minted Republican, sought the Republican endorsement for Mayor last year. In July, he called Doyle Lyons a “sorority racist,” a phrase he took from Chris Rock’s 2016 Oscar monologue, after she refused to give petitions to someone who wasn’t registered Republican.

On Monday, Crosland Tweeted a photo of Doyle Lyons and said, “Here is a sorority racist. I told y’all but y’all wouldn’t listen. Is she a burn the cross racist? No. Go fetch me some lemonade racist? No. She is ‘I like you Rhonda, but ya just not a Kappa’ racist.”

“She literally opened her mouth to tell the public that many of ‘us’ (white people) know more about black history than black people? Racist people have lost their cotton picking minds. Wait, or was it black people that picked cotton? Remember, I don’t know my history,” Crosland said.

‘No legal mechanism’ for removal

Lyons has been under fire before. In 2014, the Norwalk Republican Town Committee endorsed John Federici for registrar. Doyle Lyons won the ensuing primary.

In May, Norwalk Republicans endorsed Doyle Lyons for reelection.

“There are no legal mechanisms by which the RTC can either remove her from the RTC or revoke her nomination for public office, just as there is no provision in the city charter that would allow the city government to remove her from office,” Norwalk Republican Town Committee Chairman Carl Dickens said in a Monday email. “We asked her to resign; she informed us that she was leaving, and then she reversed her decision.”

While I don’t think it’s fair for KDL to be tarred and feathered in public, her comments were unacceptable.
She should do the right thing- resign, retire and move far away.
This has nothing to do with politics. It was insensitive.

Public servants need to lead through their speech and actions. Because the Registrar of Voters is central to the electoral process, which is in turn central to our democracy, that office needs to command our highest level of public trust.

Karen’s comments were hurtful, divisive and completely unacceptable. Because of them she has lost that public trust. She has no choice but to follow through with her previous resignation.

I don’t always see eye to eye with Darnell Crossland, But his comment “I like you Rhonda, but Ya just not a Kappa” struck a cord with me. Not necessarily for the obvious reason described above though. It brings to mind our suburban progressive neighbors calling for reform. Except,they are not really opening their homes up. Take New Canaan, for example. The only POC in their school system (with a few exceptions) are the live-in hired help. Yet, these same progressives feel they’ve been shortchanged by lack of diversity in those same schools. Or take similar progressives in Westport. They invite POC landscape their lawns, but God forbid those same landscapers use Compo Beach to cool off after cutting the grass…The list goes on and on. As Darnell in effect said, I love ya, just not in my neighborhood…Hypocrisy at its best..We don’t need the beaches, but it’s time for Suburban progressives to fight for school integration. Again, based on Darnell’s hypothesis it won’t happen. We’re not Kappas
On a more positive note, I’d like to send a shout out to my favorite Italian of all time. Mother Cabrini deserves a statue in Heritage Park. She was a positive star that made America a better place. Thank you Sister Cabrini!!!
And Karen, you’re probably a good person but you have to go.

OK, let’s all go scour through every person in public office FB pages no matter what position they hold and find each time an item is posted and could be construed as “racist”.

How many items will we find and once found, can we agree to harang them to resign from office as well?

Let’s just see how many others in public office have posted something that could be construed “racist”.

I have a feeling there will be many calls for resignations.

Hopefully the Secretary of State will remove this woman who has been running wild on Norwalk for decades and take away her pension too. She is selfish and has no respect for Norwalk.

The Ethics Commission can’t do anything?

Yes take a close look at Senator Duff’s posts and see all the outrageous things he has said and ask for his resignation. Then do it for everyone else. That’s only fair. Karen don’t make it easy for these fools. Do not resign over a Facebook post!

Where is the official comment by her relative, BOE member Erica DePalma. These democrats condemn everything and everyone, but when it’s her own family member, mum is the word.
Where’s your statement, Erica? Don’t remain silent here.

Also, the amount of ELL students in Norwalk is getting out of control. But what would you expect from a sanctuary city run by Rilling and Duff?
The people coming from all these different countries are the true rivals of the Norwalk blacks. Blacks are pushed to the side for people who come here and can’t speak English.

Why doesn’t Norwalk and its legal counsel just process the resignation letter that Karen submitted? She clearly resigned from the job!

Dear Norwalk Parent. This has nothing to do with Erica. Why don’t you show who you really are. Oh wait. Your mouth wouldn’t be talking

What does Norwalk State Representative Gail Lavielle think about this?

Purge ALL politicians and public servants and replace them with monkeys and other cute animals.
Pretty funny how very few leave public office or service willingly.

Who has the guts to enforce the rules? Every voting guideline is broken in the 140.