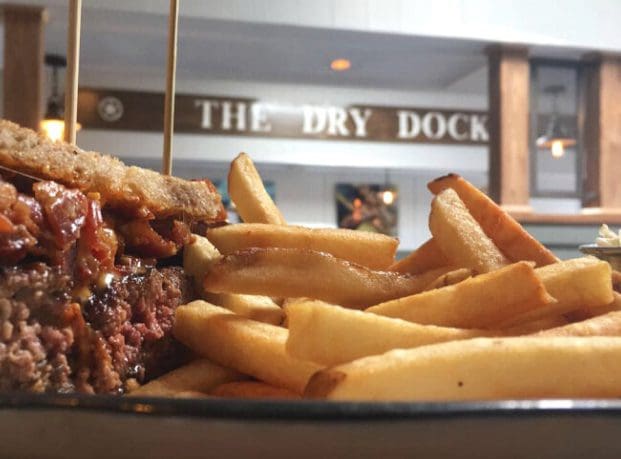 A photo on the Dry Dock Bar & Grille website.

NORWALK, Conn. — The owners of the popular Dry Dock restaurant on Main Street are taking on the food service at Oak Hills Park.

Dry Dock will pay a percentage of sales to the Oak Hills Park Authority instead of a straight rental fee. Mastronardi “was amicable to that,” DePalma said, calling that one of the reasons Dry Dock won out over other vendors.

The food and beverage operations contract approved last week covers restaurant services, on-site outings and banquets, the halfway house, a beverage cart, and the snack bar at the tennis courts. The contract extends through the end of 2026 but has an “out clause” after three years, he said. Either party could opt out with three months’ notice, without cause.

Gross sales do not include the beverages cart or gratuities, and the Authority gets 10%. The total due is capped at $60,000 through March of next year, to give the new operator a better chance to succeed, OHPA treasurer Joe Andrasko said last week.

“I think everybody here put in a lot of work on this, did a lot of vetting,” DePalma said Thursday. “So you know, I’m excited to get this going forward.”

Story corrected early Saturday to show that gross sales do not include the beverage cart.

Gross sales do not include beverages?! That is a major give-away, but one can only hope that the food is a draw.

And folks should really,really be disturbed by “Executive Sessions”, which is just another name for a secrest proceeding.Used on a state and local level to cover up. In this case…a golf authority? Really? Something is soooo secrect that they have to go behind closed doors,without record,to discuss public business?

This is great news, the DD is a great restaurant.

The only issue would be renting out to a small wedding, bridal showers, etc…

Hopefully there is an alternative menu.

Correction. Gross sales don’t include the beverage cart, they do include beverages otherwise.

This is an outstanding “get” by the OHPA. DD is a great restaurant and will be a terrific fit at Oak Hills. Unfortunately, DryAsABone has once again demonstrated a total lack of knowledge or understanding of the restaurant industry as well as the contract negotiation process.

I live across the street from the Park and love that venue. Weve been wishing someone could make a go of it. My husband and I will go for sure. How about a neighborhood promotion to get things launched?

We now have an established restauranteur who understands available revenue streams, expanding points of service, hospitality, and quality product output, which all go to produce profitability, and longevity. I look forward to the opening!

That’s great news.
They really need to take out the golf store and turn it back into a bar and more space to allow larger functions.
Removing the bar was absolutely ridiculous.
Why would a golf shop be inside a restaurant!!!

Awesome. Another establishment for Duff to harass.

Seriously, best of luck to Don. Oak Hills is booked solid and hopefully they show up hungry.

DryAsABone typical negativity to anything new in Norwalk.
Best of luck Don! Excited to see an operator with golf restaurant knowledge and know how …Finally!

@Dayna: You need to check your facts. This facility was always intended to be a restaurant, not a banquet hall and the original plan called for the pro/golf shop to be in the same building. The bar that you claim was removed was not a sit down bar but in fact was a service bar with a lot of wasted space. Bottom line: The building is now configured the way it was originally intended and with an outstanding restaurateur on board, should finally be successful.

@ John, actually there was a sit-down bar at one point where the pro shop now exists. I know, because I occupied a seat there, as did many friends. It didn’t last long, so I understand if you don’t remember it, but it was there. As for banquets, private parties are an integral part of any sit down foodservice operation. The pro shop was perfectly fine where it was by the first tee. Just my opinion.