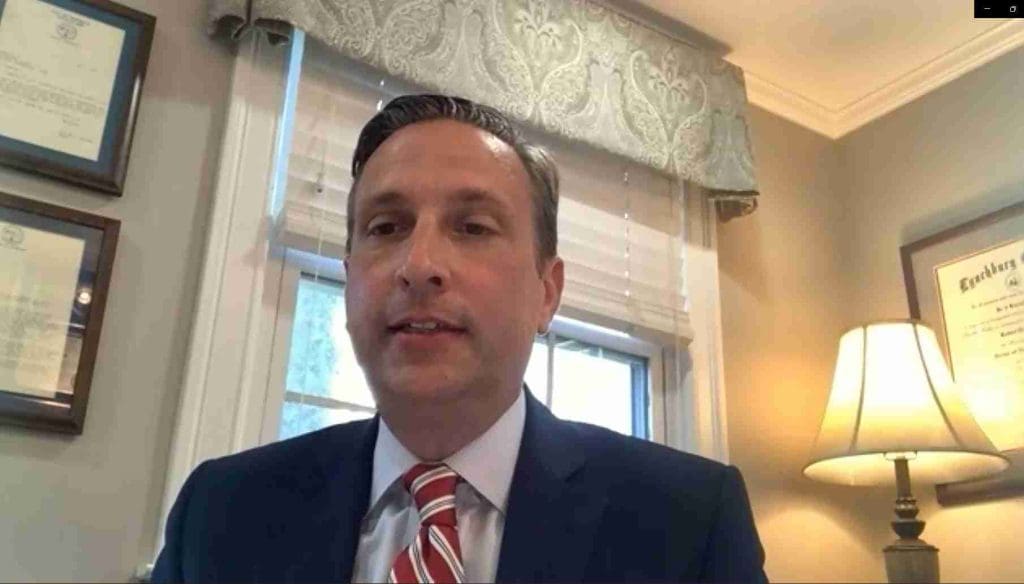 NORWALK, Conn. — Norwalk and Darien Democrats endorsed State Senate Majority Leader Bob Duff (D-25) to run for a tenth two-year term, praising him as a politician who really does “stand up” for his constituents.

“Bob, as many of you know, has been targeted by the Republican Party for many years, because he’s a threat to them. But he has prevailed because the voters of the 25th district know and appreciate what Bob has done for us,” Mayor Harry Rilling said, nominating Duff for the seat.

“All of you know that public service is my passion. I love this job. I love standing up for you,” Duff said.

“We know this is a very, very, very difficult time in our country, times unlike we’ve ever seen,” Rilling said. “Our democracy’s being attacked, women’s right to choose is being threatened, the NRA is standing up and gun violence is all over, the pandemic, and its effect on our students in our economy.”

The district needs a state senator who has the courage to “meet those challenges head on” and “Duff is the man,’ Rilling said.

Not only has Duff fought for women’s rights and equal pay, he’s “been right by my side” during the pandemic, helping to strategize, Rilling said. Duff has brought money to Norwalk, to the schools, the museums and “millions” for infrastructure.

Duff helps pass bipartisan legislation that seeks to address the mental and physical health of students, said Theresa Vogt, Darien Democratic Town Committee Chairwoman, asserting that Republicans attack educators and curriculum, while “Duff and his fellow Democrats propose and support legislation that prepare students for the world outside of Darien and Norwalk.”

She said, “We need Bob Duff in the Senate to continue fighting for all our children with sensible ideas and legislation versus the Republican strategy of anonymous Twitter or Instagram pages filled with lies and myths and misinformation that do nothing but incite unnecessary fear.”

Norwalk Board of Education Chairman Colin Hosten said the State budget signed Monday by Gov. Ned Lamont “may be the best budget ever for the city of Norwalk, particularly for our school district.”

The State has upped its share of school construction funding to 60% of costs for the next 25 years and increased the budget for a new Norwalk High School by $50 million.

“Honestly, my jaw is still on the floor,” Hosten said.

“I am so excited about the state of Connecticut,” Duff said. “And many of you know that over the over the years, we’ve had to make some difficult choices and decisions… 10 years of hard work has gotten us to that place where we just passed a budget, a bipartisan budget, again, that cuts $600 million in taxes, but also invests in mental health, in early childhood education and secondary education, invest in higher education, and invest in our local schools, with Norwalk High School.”

He also touted the “second strongest data privacy bill in the entire country” coming out of this legislative session. The Rainy Day Fund as more than $3 billion and “We are paying down our pensions, billions and billions of dollars at a time, which actually will give us about $400 million next year in room in our operating budget, which will effectively help end our structural deficit.”

“There’s really exciting things to do over the next two years. We are in a much stronger position. People are moving to Connecticut like crazy,” Duff said. “Norwalk is one of the largest, fastest growing cities in the in the state. And, and I just want to make sure that we are positioned right, as a state, we’re positioned well as Norwalk and Darien, and that we continue to move forward, we continue to make the proper investments and that I continue to listen to all of my constituents in every community and represent all of you the best that I possibly can.”

As much as I dislike him one would be foolish to vote out a person with seniority in a place like Hartford. Bob Duff does bring home more bacon than a junior senator would. Look next door at Stamford…
By design, FF County gets the short end of the stick but without senior member representation you would really get the shaft.
Hold your nose and vote your pocketbook.

Sen Duff has more energy than all of Norwalk’s elected leaders combined. He could make a great contribution to our City by securing some CT Stater Education Dept intervention to help our challenged BOE improve our student achievement. That most of our kids don’t meet Ct Edu Dept graduation standards is unacceptable. As is most not getting 4 yr college degrees. When local boards fail to get the job done there’s a role for State intervention. Norwalk’s BOE needs major assistance. Our surrounding towns get the job done spending the same monies per student. Why not Norwalk ? Bad water ?

Why does the story about The Trojan Horse Come to mind? I think Rilling needs to be reminded that Duff tried to sacrifice Norwalk Police at the height of the George Floyd tensions. Selective memory doesn’t suit Rilling well. Rilling also seems to have forgotten that Dem controlled legislature has crushed Norwalk taxpayers in favor of Homogenous school districts like Hamden, West Hartford and New Milford for decades.
This selective memory thing may have started with his promise to fix zoning laws in West Norwalk 10 years ago.
Why are people moving to Connecticut? In Three words -“Diblasio-Cuomo policies.”

Mayor Rilling mentions that Senator Duff is a champion for women’s rights and equal pay for everyone. The mayor further goes on to say that Duff has been working right alongside of him through the last couple of years. Good to know.

To that end, I’d like to hear from either our mayor or Duff at least one explicit example of Duff fighting for a Norwalk woman’s legal rights. Or is this merely grandstanding?

In my neighborhood quality of life has diminished due to all the traffic, construction and new apartments in Norwalk. My families income has been stagnant while inflation has made almost everything more expensive. Our kids are in private schools because of a poor performing public school system. If he is getting money in Hartford it is not helping many long time residents and while people think NPS is getting school construction money for the next 25 years (that could change anytime in the next 25 years), it does nothing to help Norwalk’s sub-par educational experience in the classroom now. People have also flocked to sub regions of NYC because of COVID, not policies. It’s clearly election year with all the smoke and mirrors.

I recently asked Senator Duff what his position was regarding use of Manreasa Island as a construction assembly yard that would bring traffic, noise, pollution and degrade the local environment for 5-10 years and negatively impact the surrounding neighborhoods including village creek, harbor shores, Woodward Ave, and Wilson point. This location will also cost the state more money than other locations, with the state not doing anything for the surrounding areas

Building the bridge at Manreasa benefits no norwalk residents and costs more money.

Like it or not, Duff will continue to get re-elected until he decides not to run. The opposition has been unable to come up with anyone exciting enough to give him a real challenge. Every 2 years they march in another unappealing empty suit type who is boring and painful to listen to. Unfortunately, I view both of our 2 major political parties the same (after some shake & bake)…….Both just a simple bowl of 💩 with the only difference being that one is cold and the other is warm. But nevertheless, just a plain and simple bowl of 💩.

My kids have been well served by the Norwalk school system. My kids have had some incredible teachers and administrators. To some degree you get back what you put in. If anyone wants to talk about it w/me privately I’d be happy to do so. Norwalk school grads are going to some of the most competitive colleges. Test scores are skewed because we have a ton of students who are new to this country, many of whom have been out of school for years-who also are included in the testing. Moreover, the neighboring districts not only spend more per student but also have parents who spend $1000s on tutors, psych tests to get extra time, college counselors, test prep courses etc…. Comparing the neighboring districts to Norwalk is apples and oranges. As for the other complaints, ie. traffic, building that’s not State matters but local ones. That’s zoning and public works. I’ve said it before and I’ll say it again- for all the complainers out there—no one wants to live here anymore cuz it’s too crowded.

As Pelosi has state, “in some discticts, a glass of water with a ‘D’ on it can get elected”

She said it, don’t shoot the messenger

I didn’t realize that our hospitals are taxed here in CT. WOW!!! What does the state actually tax? Do the local municipalities in which the hospitals are located levy any sort of taxes…….real estate, equipment, vehicles? Even though
I’ve lived here all my life I continue to learn something new everyday………most like this not so nice. Tax, tax, tax.