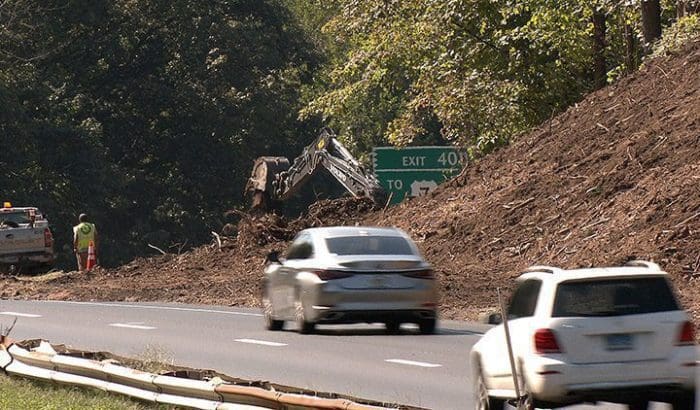 “It’s time to bring our roads and our bridges and our highways into the 21st century to create an easier commuting experience,” Haskell said. While it was predicted when the Merritt opened that it would provide rapid and pleasant transit, “I think that anyone who travels on the Merritt today would struggle to define their commute as either rapid or pleasant. We’re going to try to bring it out a little bit closer to reality with the close of this project. That’s about $61 million specifically made available through Governor Lamont’s most recent bonding agenda.” 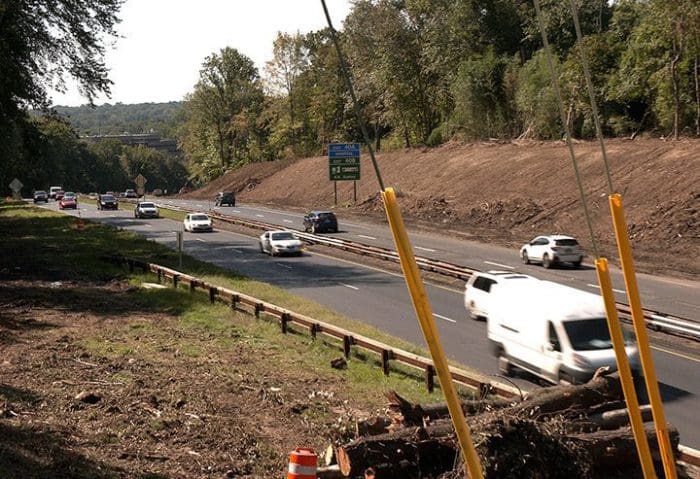 Haskell described the Merritt work as repaving around Route 124 and at Route 15, around exit 38.

Duff said, “Don’t let this fool you that it’s just in resurfacing. It’s also in a lot of the reconstruction that’s happening in the last two legs of that 25-year project that Senator Haskell talked about. So you have drainage, resurfacing, expansion a little bit.”

It widens the Parkway in some areas, adding a breakdown lane, Duff said.  Haskell said drainage is more important than people realize, given the increasing intensity of storm and the resultant flooding.

“These drainage projects, maybe they’re not going to make the headlines, but they are I think, going to resolve a whole lot of headaches down the road as weather only becomes more extreme,” Haskell said.

As for the Route 7-Route 15 interchange, that work is expected to begin in 2024, Duff said. 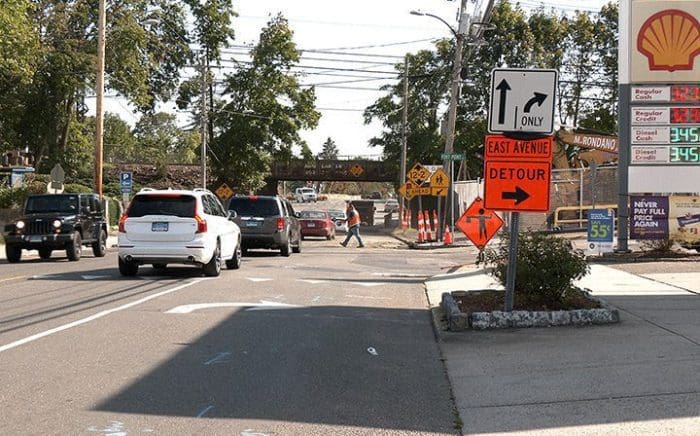 The $14.9 million East Avenue project includes lowering the road under the railroad bridge. It’s beginning now, after years of discussion, because the State is rebuilding the Walk Bridge, the railroad bridge over the Norwalk River.

“The decision was made, which I believe was a good decision many years ago, to not just reconstruct the Walk Bridge, but to do a lot of the bridges around it, because of the fact that they were all just as old,” Duff said. “And so this will end up helping to expand East Avenue and alleviate that bottleneck, it will also create a much better and better use train station and East Avenue for commuters and a safer train station.”

The East Avenue widening project has long been controversial. Residents can expect road detours for years.

Also on tap are $98 million in safety improvements for Interstate 95 between exits 16 and 17, Duff said. “This area will not only look better, but I believe will also help save lives because of the current configuration that is there right now.”

Typically, the local politicians equate big dollars to big improvements.
Connecticut never gets what they pay for.

Much needed improvements at Exit 16. I hope the concrete highway sound barriers which Bob Duff’s constituents who live close to I-95 benefit from in Darien come to Norwalk as public health/safety improvements between exits 16 & 17. Some no maintenance, arborvitae behind the barriers could also contribute to noise pollution buffering and help trap environmental pollutants. Trees have been removed for the Strawberry Hill Avenue Bridge construction, which has taken away some highway sound absorption and made for a louder neighborhood.

Infrastructure is nice. But with a decade long stagnant economy/employment level surely there are higher priorities to encourage major new firms bringing good jobs to CT including Norwalk and other major cities.

These are make work boondoggles for the politically connected contractors that fund campaigns for these grandstanders.

Connecting the Merritt to Route 7 should have happened 25 years ago to alleviate in town traffic, but thanks to those standing up for us, we get a storm drain and paving that we’ve paid for 10x over.

Why would drainage be added to the Merritt? It would be a waste of money. Once Climate Change is fixed in 10 years there will be no more flooding.

On the same note they are lowering East Ave under the train bridge. Yeah, look at the Rt 1 train Bridge in Darien and see how that floods. You want to try to tell us that East Ave won’t flood?

Why would East Ave be widened? Yup, to make room for more cars to add more apartments which…will only end up with the same amount of traffic while being flooded.