NORWALK, Conn. — Donald Mastronardi describes it as a moment of lenience: his staff allowed a patron of his restaurant, Dry Dock Bar & Grille, to drink a beer at the bar. But what would have been regarded as a gesture of kindness in the pre-COVID-19 days embroiled Mastronardi in conflict this week.

Mastronardi, a New Canaan resident, was charged with violation of a public health emergency order, a misdemeanor, on April 24. Under State Statute, he could be fined up to $1,000 or imprisoned for up to a year, or both.

Mastronardi told NancyOnNorwalk last week that he allowed a regular to pop open a beer while waiting an unusually long time for takeout food. This violated Gov. Ned Lamont’s March 19 order that restaurants and bars be allowed to sell alcohol in sealed containers only to customers buying takeout food. Alcohol must be consumed off-premises.

“I have nothing but respect for the police, I don’t blame them for this incident,” Mastronardi said Thursday. “If anything, it’s my action that caused that, for them to have to waste their time. But it was a misunderstanding and for one person at the bar.”

Nonetheless, State Senate Majority Leader Bob Duff (D-25) took to social media to blast Mastronardi, posting a link to a story about the arrest on his Facebook page Wednesday. “Everyone needs to play by the rules,” Duff wrote. “It’s a tough time for many businesses, especially restaurants, but no one is above the law.”

One person posted a screen capture of Mastronardi responding to the charge, on Facebook.

“I would like to ask the mayor how businesses are supposed to pay their property taxes when we aren’t allowed to open????????” Mastronardi wrote.

“It doesn’t surprise me a right wing man from New Canaan thinks nothing of spreading disease in Norwalk,” one commenter replied. 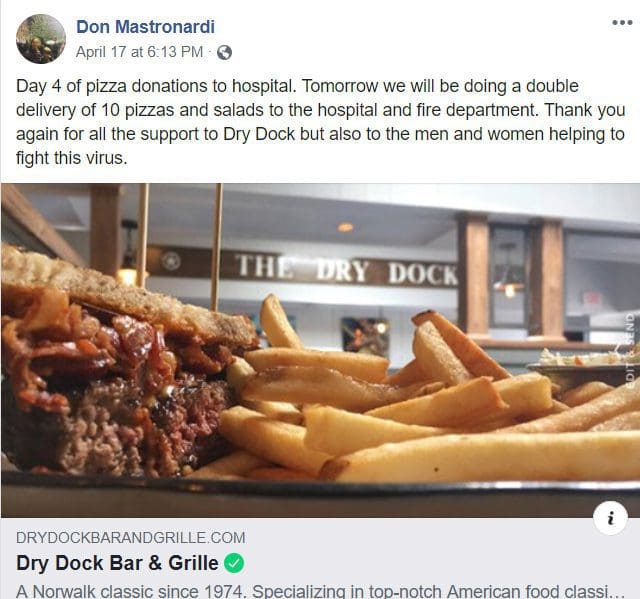 “It made me sad to scroll through his personal Facebook page. It looks like he was donating a lot of food to local front line workers. It’s a damn shame that this idiocy will overshadow all of the good he was trying to do,” one said.

Mastornardi’s post to Rilling has been deleted. In another post, dated April 17, he said the restaurant was on day four of pizza donations to the hospital.

Another person on the Duff chain asked who is policing Norwalk businesses.

“The city I live in is pretty much lawless and from block to block, business to business the rules are so different I can see patrons do not know what they can and can’t do? I visit 3 of the same chain supermarkets. The policies and procedures are so different it is odd. I don’t know what I can and can’t do. Some staff wear protective wear and will say something to you if you go down the wrong aisle. Next store, same chain staff wear no gloves or mask and no one could care less what aisle you go down. So again who is supposed to be policing this?” he wrote.

Local health departments and police are enforcing Lamont’s orders, Duff replied. A Norwalk  Democrat pointed out that some people have health conditions that exempt them from wearing masks.

A citizen took Duff to task.

“Way to go Senator. Stir it up. Get everyone angry.😡 Right wingers and left wingers at each other’s throats,” the poster said. “What leadership! Nerves are frayed, people are at wits end , people’s bank accounts are empty, the Constitution trampled… and you decide to demonize a local business person. Bravo!”

“Thank you Bob Duff for calling this owner out. How the hell are we ever going to flatten the curve with crap like this? Thanks for bringing it to light,” another replied.

NancyOnNorwalk asked Rilling if he thinks there’s widespread violations of Lamont’s orders, and if he had anything else to say about Mastronardi. He replied:

“I frequently drive around the city during the day and during the evening. It is my practice to stop look into the different establishments to verify compliance with our restrictions. I have seen no instances of anyone violating the regulations. Therefore, I do not believe this is widespread.

“Anyone observing violations should notify the police department so corrective action can be taken. Medical professionals continue to say physical distancing is the most effective way to stop this pandemic. People reporting violations will be helping us to enforce social distancing regulations.

“Mr. Mastronardi reached out to me to apologize for the situation at Dry Dock the other evening. He also reached out to the police department and apologized to them for making them respond. I believe he was sincere and was truly sorry what had occurred.”

I’m sorry but if you go into any large retail establishment, you will see violations of all of the social distancing rules. Home Depot was jammed this weekend with no guidance for customers. I don’t believe they were under 50% capacity. Grocery stores have people on top of each other. It is a shame that our local politicians want to pick on the small business owners they should be trying to protect while turning a blind eye to the big guys. It’s easy to pick on the little guy. Ask any school yard bully.

I’m impressed at how smart the Coronavirus really is. It doesn’t contaminate you at Walmart, Target, Cosco, Home Depot, Supermarkets, etc…..But it sure will get you at churches, hair salons, nail salons, restaurants, bars and any other small business.

This incident is something akin to the seat belt requirement. Violation of a victimless crime law should bring two warnings and on the third (when it becomes apparent that the violator is defiant) he or she should get the prescribed penalty. This approach can easily be employed in the digital age from the police car computer. Sen. Duff’s response to the “beer at the bar” matter clearly shows that he is a proponent of big government and even the “thought police”. He always thinks that he knows better than you and me and he is always looking for an infraction that conflicts with the altruistic goals that will get him reelected. The mayor should take a firm stand against Duff on this especially with Rilling’s police experience, but it appears from his statements so far that he is unfortunately considering the politics of the situation.

Why has it become so common to use random peoples’ quotes from Facebook/Twitter in articles. It’s not news or journalism in any way. You can mention the gist of it, if it’s important/informative. I’ve been noticing it on many news websites, I hope it stops soon.

Bob You are 100 percent correct. I would add that the PD should have locked him up instead of a summons.

Shame on Bob Duff for taking to social media to blast others.
No politician should be allowed to criticize people on any social media platform. I don’t care if they are a Republican or a Democrat. I don’t care if it’s the President or a guy way down low like Duff.
It’s simply unprofessional.

With this slow down, is Bob Duff collecting a full paycheck?

Interesting that Senator Duff has broken away from weather forecasting and is now suddenly invested in prosecuting to the fullest extent of the law one of his constituent small business owners. That he used the Nancy Pelosi dog whistle phrase “no one is above the law” raised my suspicion that Mr. Donald Mastronardi is a Republican. And after some research: indeed, he is!
.
https://voterrecords.com/voter/4146204/donald-mastronardi
.
There’s more to this story that Senator Duff is not ‘fessing up to.

Incredible how a politician who is getting a pay raise in July 1 can victimize a buissiness trying to survive.

This is an over-reaction to what was a temporary lapse of judgement of the Dry Dock staff. What’s the point of making an example of out of Dry Dock for this?

If you are a true journalist why don’t you do a story on how 4 days prior to my incident Bob Duff and other State Senators wrote a letter to the Gov and urged him to allocate 20 million dollars for people in the US and CT illegally ? Bob Duff claims nobody is above the law and has to follow the rules, so have him explain that ? Bob Duff is a coward, I will debate Bob Duff anywhere at anytime on policy and or economic plight of business owners. I have spoke with Bob Duff on polices like minimum wage and I can tell you first hand Bob Duff has NO clue what business owners go thru on a daily basis. Bob Duff is about himself and how he can advance his political career. “Nobody is above the law and everyone has to follow the rules,”unless you are a group that you want to exploit for political gain, then your disregard for state and federal laws mean nothing to Bob Duff when you can exploit a group for political gain. Bob Duff isn’t a leader, he is a coward. He won’t shame me or intimidate me, at all.