I am appalled at Senator Bob Duff’s actions against parents and vaccine-injured children in Connecticut.

Over 2,000 people signed up to testify but the leaders of the committee limited the time frame to just 24 hours. This only allowed just over 200 speakers to have their voices heard, silencing the majority. Of the over 200, only 10 supported the bill. The testifiers were made up of parents giving heartfelt testimony about how their children have been injured due to vaccines, how their religion opposes vaccines and how the medical exemption does not cover actual medical issues, thus making their children at high risk for vaccine reactions.

As hundreds of parents were seen crying on camera talking about the harm vaccines have done to their children and young children were seen pleading with officials to not kick them out of school, Senator Duff was on social media mocking these very people and children.

I am a long time Democrat and I am absolutely appalled at his lack of respect, empathy and professionalism. After four years of fighting against the Trump administrations hate speech, segregation of minorities and lack of overall respect, I could not believe I was witnessing it from my own party. 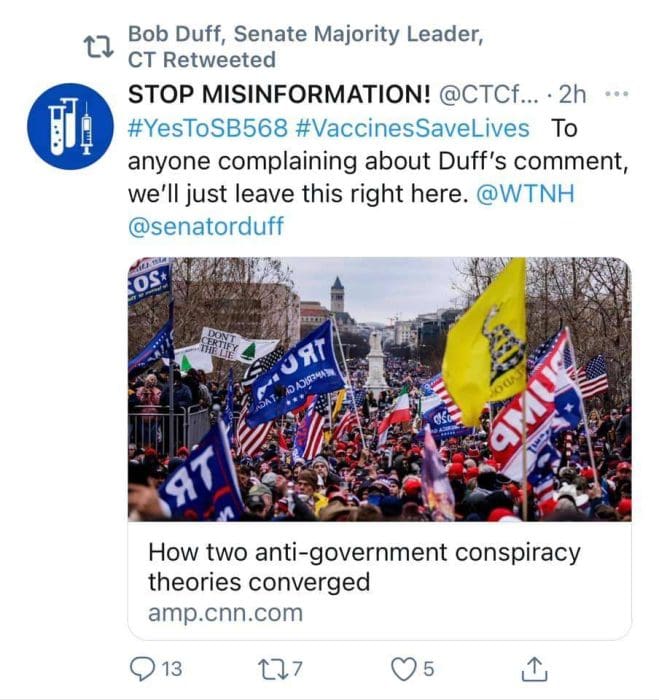 I have attached a post that he made, along with a GIF about how sad the situation is. Many use the slur “anti-vaxers” and compare parents to the radicalists Q’Anon. We are not radicalists. We are parents who have seen our children injured or have high risk children and just want to have the right to choose the best course of medical action with their doctor, not the government.

The conduct expressed by Senator Duff is very upsetting. Not only is he attacking many families who have suffered for many years due to these issues but also the poor children. He has no remorse and does not take accountability for his actions.  This is not about if he agrees or disagrees with the bills, as he is entitled to his opinion. It is about not going on social media to ignite hate speech and mocking parents and children.

I believe he should step down as the Majority Leader of the Senate. As a Democrat, I refuse to have our party led in the same manner we spent four years fighting against. It is about being a professional and not spreading hate or inciting your followers to attack the other side. Since the post, I have been verbally attacked and called names due to my child not being vaccinated because of a medical condition. It is not OK to provoke hate. He is no better than Trump and the Democratic party needs to take action.

Bob Duff is not a great guy, but vaccinations are key for the health of all citizens.

The law does include a medical exemption, just not one where the medical issues with vaccines are made up. A doctors approval would be needed to not take vaccines in cases where there is a real issue. In those cases parents should be especially in favor of this law because it keeps their children safer since their classmates who can take vaccines would be forced to do so to be in school.

Hasn’t COVID taught us even more clearly that letting everyone make medical decisions based on information from Facebook doesn’t work and we need collective rules made by experts (like mandatory vaccinations) to keep us all safe?

Thank you for sharing your point of view Brittney. Could you give some specifics about these vaccine injured children please? I’d like to be as informed as possible.

What religions do not allow vaccinations?

I guess the blinders are coming off the eyes of some Democrats who have blindly voted the “D” line without regard to their being well represented, not just a few of the chosen like the unions. Even though she is a “D” she makes perfect sense, as a parent you have responsibilities as a right to make sure your children and your personal health is to your liking, which can include medical reasons (which is science) or religious belief. No one in America should be forced to do anything against their will or beliefs. This is soooo wrong on many levels.It is Bob’s custom to impose his will on us all, he knows better, we are being treated like idiots (which to a degree we must be, we keep sending him back to Hartford) Legislators like him do not belong in office. Now that the blinders are coming off, let’s just vote for responsible
Gov. for the residents of ct.

Brittney, Do be persistent and you will prevail.

I understand you don’t want the vaccine and you don’t want your children to get it either, but what about me and my children? You are putting us at risk by not getting the vaccine!! That’s not OK, we have to vaccinate a large percentage (75%) to get this pandemic under control so we don’t lose more lives! Does that mean anything to you?

I wish to share a portion of the written testimony I submitted to the Public Health Committee last week:

“Let’s be clear: there are no established mainstream religions which prohibit or discourage the use of vaccines by their adherents. Not catholic, not Jewish, Muslim, Hindu, Wiccan or Satanist. There is, however, a large and sadly growing cult of people who have convinced themselves, and each other, that vaccines are dangerous, and that drug companies and doctors have conspired to take away their rights and harm their children. Yes, this is all utter nonsense. Yet these are the beliefs of many people in our state, many of whom also will testify today. Let’s be clear: these beliefs are toxic and are objectively false, and they are not worthy of respect from any one of us nor from our state legislature and elected government. I’m not saying the people – I believe people are worthy of respect – but toxic and nutty beliefs, even if shared by many with a deep commitment – those beliefs, which lack evidence to support them, are not worthy of our respect, and should not be considered as a basis for or against legislation in a secular government.”

I listened to much of the oral testimony last week, and learned that some people who harbor certain beliefs about vaccines consider “anti-vaxxer” to be an offensive slur when applied to them. Ms. Goodman – can you indicate what term you consider to be appropriate? I have used “anti-vaxxer” in the past, and I would be happy to graduate to language which people consider more acceptable. Thanks.

Thank you Brittney for stating your point so well. After discussions with my doctor, I made the personal choice to get vaccinated for various illnesses, because I believe they will protect me from those illnesses. I was very anxious to get the Covid vaccine as well and received both doses; however, I do not expect anyone to take a vaccine, unless they choose to do so. The choice should be between the individual, parents, the child, their trusted doctor and their religious leader. Politics and politicians have no role in this.

I am saddened and angered by Senator Duff’s vile and dangerous comments about the voters he represents and their sincere concerns. Perhaps it is time for him to step down, since he no longer appears to care about those who voted for him and seems to be confusing fact and fiction, for example, comparing those who do not to vaccinate, for whatever reason, to QAnnon (how dare he!). If he really cared about the people who voted for him, he would come from the side of compassion instead of mockery and deceit, but it is too late for that – that train has left the station.