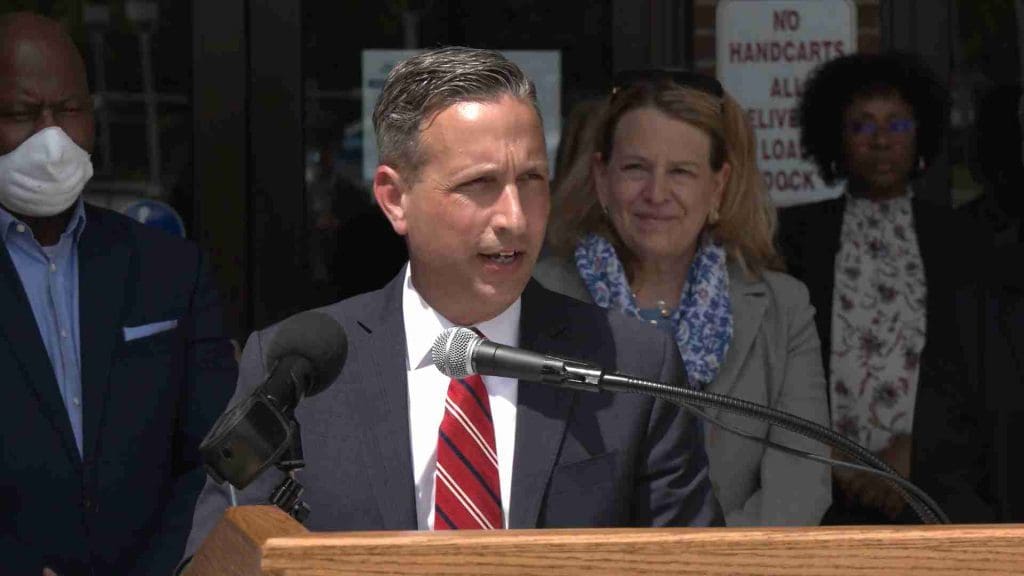 “We’ll say it’s 30% over two years,” Duff said. “That’s a pretty impressive number, as far as I know. And so, I’m really excited about that, because what that means to property taxpayers and to people in the city businesses and others is that that extra state money means that the mayor and the council and others don’t have to raise property taxes, that that money coming from Hartford allows us to make critical investments, but also at the same time keeping tax bills low.”

Norwalk’s slice of the pie over the next two years is $296 million, Duff said at a news conference called to highlight the funding.

“Whether that’s in operating or that’s in some capital investments, or money to some of our great nonprofits that we have, we have a lot to celebrate,” Duff said.

The Alliance District designation that’s been benefitting Norwalk Public Schools was set to expire but has been extended for two more years, bringing in about $5 million, Duff said. It also means the district will get a higher amount of reimbursement for excess special education costs.

Duff also sought to remind folks that the Educational Cost Sharing (ECS) formula has been changed to make property values less of a factor and including Multi-lingual learners and poverty rates. The increased funding to Norwalk is phased in over 10 years.

“I helped lead the way on that when we had our bipartisan budget,” he said.

This will save local taxpayers $25 million when the South Norwalk neighborhood school is built, he said.

As for nonprofits, funding for the Stepping Stones Museum for Children jumped from $30,000 to $100,000; Youth Business Initiative and the NICE (Norwalk International Cultural Exchange) Festival also got funding.

School district leaders and nonprofit organization heads were among those speaking at the news conference.

“This funding is changing lives, it’s going to supporting our scholars and providing them with the services and resources needed to allow them to achieve their dreams,” Deputy Superintendent of Excellence, Equity, and Inclusion Thomas McBryde Jr. said. “It’s going to creating facilities that represent 21st century skill that they will need to be competitive in the actual world. It’s going towards ensuring that we are being able to provide services of mental health support, so that scholars are receiving the social emotional learning and resources needed to be successful despite some of the challenges they are facing.”

Assistant Superintendent of Business and Operations Sandra Faioes said that when she was promoted last summer, she reviewed the Board of Education’s facilities studies done in 2014 and 2021.

“I was thinking, ‘Well, we have all the data but where’s all the funding?’ And so then, when we learned that there was a 60% reimbursement, then we started to think about how many possibilities there are and how we can actually make this true,” she said.

“We’re having a lot of staffing issues, partly because the programs cannot afford to pay their staff more,” Oster said. “Through this funding, they will be able to increase salaries, hopefully stabilize our workforce, and also really do some much needed renovations and improvements to our programs.”

“We had no idea whether children as small as five years old would be interested to come in to the mansion to see our programs. But the program was extremely successful. And we’re hoping to do it again this year with funding from the state,” she said.

Mayor Harry Rilling said, “I get excited every time Senator Duff and the Governor come to Norwalk together, because they always bring money.”

I’d like to see those crack political investigators out there dissect these numbers for us and tell us the reason these numbers are one-time payouts Every city in Connecticut will receive over the next one-two years. Certainly, if one can find old addresses of candidates on-line one can do a little internet leg work and explain that to us. Thanks in advance.

Maybe some sleuthing as to what’s going on in our schools discipline-wise might also be helpful. As some of us are aware there was another nasty fight at McMahon reported on the news. The lack of discipline doesn’t end at the High School level. Our Middle Schools have been out of control with serious fights weekly if not daily. Maybe some sleuths out there can let us know what’s going on. What I find pathetic is the administration is more concerned with who’s videoing these fights than holding those involved accountable…Think about that for a second.
THIS is a major coverup and should be investigated. While it’s nice to know some young candidates lived outside of Norwalk at one time, the real news is current policies are creating an environment in our schools that’s unacceptable, if not outrageous
Full Disclosure — I lived in Queens, NY/Stamford, Ct before moving to Norwalk just a few years ago.

Like him or not, Duff is bringing home the bacon. It is important to have seniority in the cesspool otherwise known as Hartford.
FF County basically is the cash cow of the state. It is good to see at least a little coming back to residents.

State funding isn’t improving the performance of our pubic schools where most students continue to fail to meet CT Edu Dept standards for graduation. Our City’s leaders and our BOE continue to ignore our failing public schools. Our surrounding towns are proud of their superb public schools. Why not Norwalk ? Our BOE continues to avoid posting a plan for improvement. So we know the future. Why aren’t City leaders expressing concern over the BOE and our under performing student achievements ?

The 60% reimbursement rate for the next 25 years — which happens to be the timeframe for the BOE’s half a billion dollar rebuild of our city schools — is huge and might help the city retain its AAA bond rating.

The 2022-23 capital budget projects our debt service, beginning in 2024, to be around 12% for a number of years going forward. That’s a couple points higher than the standard benchmarks needed to retain a AAA rating. But with the 60% reimbursement rate, the city might be able to devise a plan that ultimately brings the debt service back down to the standard 10% of the operating budget.

I doubt the rating agencies will “punish” a city for building and renovating new schools, especially after the construction program received a thumbs up from outside consultants.

How many more times does CT have to vote Democrat? Cant you seen our country and states under Democrat rule are going down the drain?

But no, go ahead and keep voting Blue!

Great work Bob . Thanks for supporting the City. Can’t wait for the nabobs to go after you again for having your dog stick it’s head out the window . Plonerman seems to be under the impression that our neighboring towns rescources, both individually, and in the aggregate, are no different from ours. It’s better to compare apples to apples and when you do NPS is among the strongest districts

Mushak Mushak. Such a one sided fan you are. Do you think it is ok that Biden send another 41 billion to Ukraine while our babies struggle for formula back home? Or is it ok that we pay Through the nose for home heating oil, groceries, diesel, and gas? You used to be the king of connecting the local delegates to the national ones. You dont have much to say now? Great job by Bob Duff getting money for the schools. I just dont understand why people dont look at the issues and the people running rather than just say vote blue.

Let me see if I can get this correct.

Towns and cities send property tax money to the state. The state taxes our income. The state also charges taxes such as a $15.00 Parks pass, sales tax, property tax, taxes on taxes and so on.

Basicly taxpayers are over taxed.

So now what Bob Duff is saying is that our over taxed dollars are being sent back to the towns and cities so that they do not have to raise their taxes for which we are over taxed on. Right?

Yet, he cuts the tax on gasoline and NOT diesel fuel. Which had no effect on gas prices what so ever.

Not one Democrat in CT has reached out to the Biden Administration to add new leases or renew leases on the U.S oil fields which is creating the spike in oil prices from the low prices of 2020 to almost three times the costs now.

Why not cut out and reduce our taxes so the taxpayer keep OUR money instead of trying to play Robinhood all the time?