NORWALK, Conn. — From hiding trash bins to taking on a new initiative – organizing SoNo merchants on a dormant project – the SoNo Comeback Task Force hit a lot of bases at its sedate meeting Tuesday.

The task force, dwindled to the point that a suggestion was made that new members be appointed, heard promises that the Washington Street repaving would start soon and agreed that it would try to corral area merchants to reinvigorate the attempt to form a Special Services District. Other topics included wayfinding and unsightly trash bins.

Eight people met in the second floor of the South Norwalk library; while early task force meetings featured lively feedback from area businessmen and women, the only people sitting and watching were reporters.

“They used to come,” Task Force Chairman Bill Collins said. “Then we started getting things done. We don’t see them anymore.”

Collins brought up the attempt to form a Special Services District, which was pitched to the Common Council Ordinance Committee in February 2014, but then fell off the radar screen.

The idea goes back five years and had never gotten as far as the Ordinance Committee before, Stephanie Pelletier of T.R. SoNo Partners said. The task force might “own it” and “crank the engine up again,” she suggested.

Bruce Beinfield asked if the mall being proposed by General Growth Partners (GGP) might be in the district.

“To my knowledge, they did not want to be part of the district. At the end of the day I am not even so certain from the district’s standpoint that they would want to have them because they would be so large. I think that they did indicate they would be willing to contribute in terms of making a financial contribution to the district,” Redevelopment Agency Executive Director Tim Sheehan said.

That would be great, Beinfield said.

“I think it might be the difference of whether it can happen or not, in terms of what is politically viable for a tax percentage and what that budget could afford to do,” Hatcher said.

The district would be designed to supplement city services and enhance the commercial district, Spinnaker President Kim Morque, chairman of the Downtown Special Services District in Bridgeport, said last year. It would create an independent board of trustees or commissioners elected by property owners, with a budget and a set of priorities that would include safety and marketing.

Regenerating the idea would depend on the financial appetite of the SoNo merchants, which might be “difficult for the property owners especially coming out of recession when rents did not appreciate as much as they had been,” Sheehan said.

It would make sense for the task force to take it on, Pelletier said.

“I would have thought it would be a private sector initiative,” Collins said. “If you think it could use a little oomph from a quasi-public sector then we could do that.”

Now what about that mall?

Preliminary environmental work has been done and some remediation is necessary, Sheehan said.

The conversation moved on to wayfinding. Senior Project Manager Susan Sweitzer said that didn’t necessarily mean signs on the streets – almost everyone checks out where they’re going through an app these days, she said. Norwalk needs to market itself electronically, she said.

“That would be great if they were thinking about it before they get off the turnpike,” Collins said.

That $200,000 project, approved last year, includes redoing the crosswalks by replacing the brick pavers that were installed in the 1980s, and installing granite curbs to lock the pavers in place. The road will be milled and overlaid with bituminous concrete and the crosswalks will get American Disability Act (ADA) ramps.

“I have scheduled the renew of Washington Street for October,” Chimento said. “It was supposed to be last June, then July, then August. They (The Pearl builders) said they would be all through by Sept. 1. Now Sept. 15. I do have a meeting Thursday or Friday with them. I’ve got to know what their situation is because then my dark side will come out because they just can’t do this.” 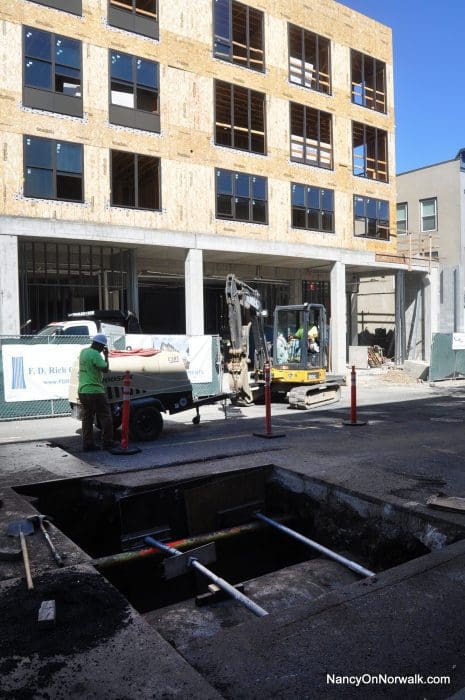 An underground pipe is the focus of Washington Street work Tuesday as construction on The Pearl continues.

Chimento referred to “problems”; Collins said after the meeting that a “great water flow” had developed in the building’s basement, “a huge spring.”

Washington Street was one-way only as the meeting went on, with work being done on a massive underground pipe. Easy to conclude that the traffic-diverting work was related to the rumored leak, but Mayor Harry Rilling said that work had been scheduled in advance.

“They have been running into obstacles and I understand that, but that is part of the deal,” Chimento said. “I’ve got probably four weeks of work to do.”

He did not reply to an email asking for more information on the topic.

Collins inquired about other work expected in SoNo – the construction of a hotel next to Norwalk Police headquarters.

It’s in design review, Sheehan said. The Redevelopment Agency sent comments back to the developer but hasn’t gotten a response yet, he said.

“We’ve got to close these things up,” Chimento said. “… I’m going to recommend City Carting to put gates up.”

There’s a trash bin and a grease trap conspicuously placed behind North Main Street buildings, he said, which would be addressed. There’s also a trash bin on the corner of Martin Luther King Drive and Washington; though not visible from the road, it does nothing to make the lot seem aesthetic, Chimento said.

It’s possible that the merchants don’t even use it, given its distance from the stores, he said. The suspicion is that residents pull up and throw things in. 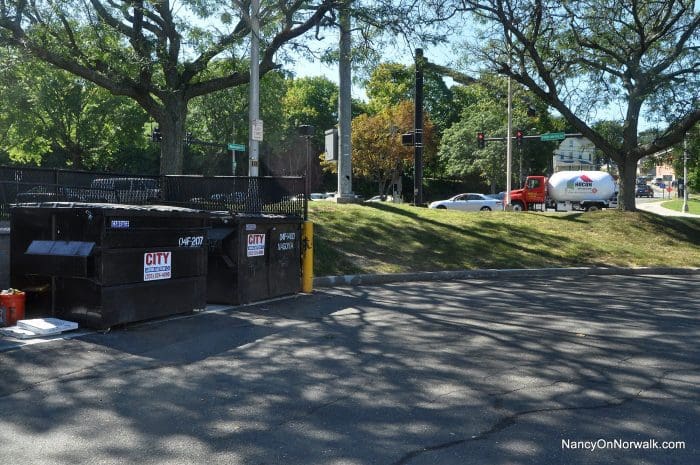 “I am really surprised it is over there because it is pretty much removed,” Department of Public Works Director Bruce Chimento said of these Webster Street lot dumpsters.

It’s there because it’s an easy place for garbage trucks to get to it, he said, promising to address it with City Carting within days.

Lighting in SoNo was another topic – the idea of replacing current equipment with LED bulbs was too expensive, Sheehan said.

A less expensive plan will be part of the next capital budget requests, he said.

That topic exposed a hole in the task force – the absence of Steve Semaya, who had been leading the lighting effort.

“He is one of our most valuable citizens; hope things are going OK with him in his business,” Collins said.

“I think we need more members to the task force,” Pelletier later suggested. “We are dwindling in numbers. Could you please ask the mayor to appoint some new members?”

Collins said people hadn’t really been “appointed,” but agreed to look into it.

“It was pretty informal originally,” Collins said after the meeting. “It wasn’t as though there was a big notice hanging on the city bulletin board. We invited people ad hoc as it came along. I don’t think there was any formal appointment of people to be on the task force. It just sort of accrued.”

“I will be meeting with Bill and some of the current members for recommendations,” Rilling said in an email.

Collins noted that business owners were not present for the meeting. He attributed that to progress being made; for example, there’s been an effort to clean up litter in the streets, he said.

“It has changed a lot,” he said. “They get very busy, maybe they get bored with this bureaucratic stuff. Parking, still problems but obviously there are diligent people working on the problems, which there didn’t use to be. So there’s not quite so much for the merchants to come grouse about. I think there’s plenty to grouse about, but they have other things on their mind; but wait until they start digging up the street.”

Exactly! Thanks for pointing this out – a rarely recognized art form lies in signage.