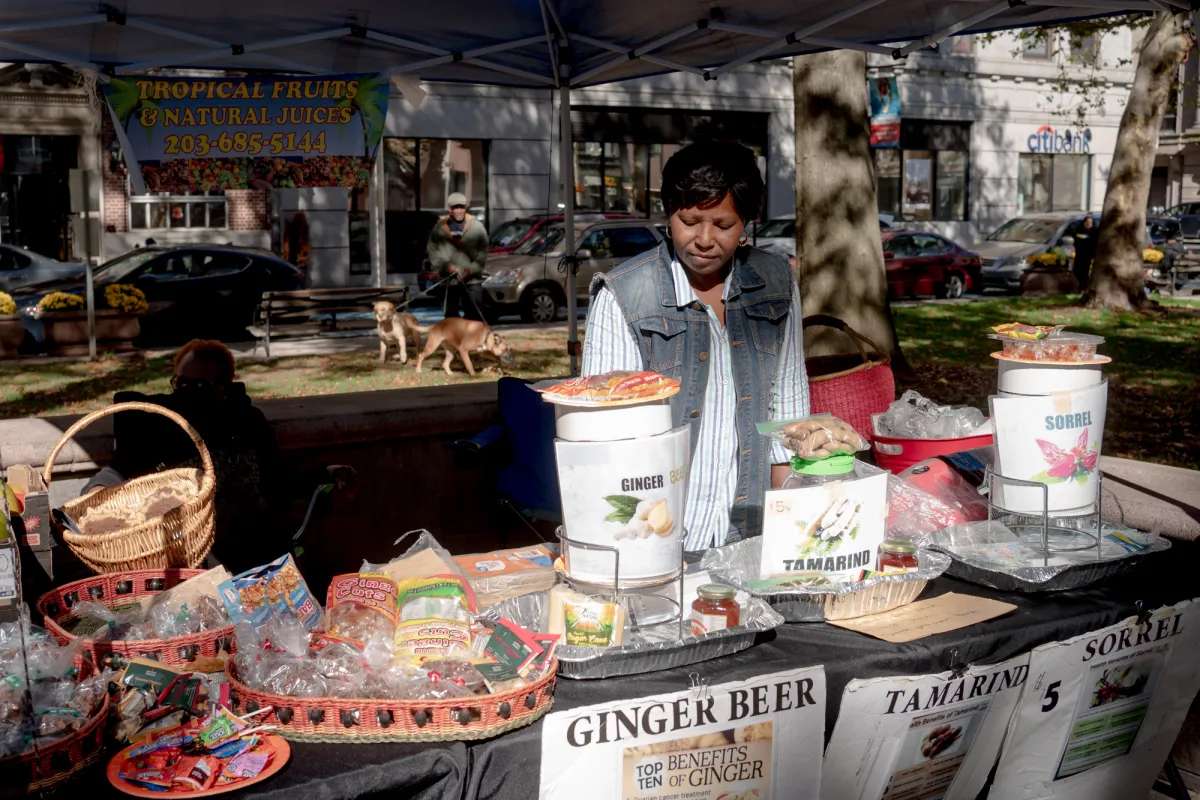 Jackie Foster sells Jamaican style food, including Ginger beer, tamarind juice and peanut drops, at a farmer’s market held every Thursday from July to October in Bridgeport. She said it would be great if early voting was allowed in Connecticut. “That way, you don’t have to wait in the line,” Foster said. (Yehyun Kim, CTMirror.org)

Jackie Foster — a Jamaica native, a mother of one and an experienced juice maker — stood under her blue tent at a windy October farmer’s market in downtown Bridgeport and said she has every intention of casting her ballot in the upcoming midterm election.

That doesn’t mean it’s going to be easy, however.

“If you go after work, be prepared to wait in line,” said Foster in her soft Jamaican accent, near picnic tables topped with sorrel, ginger beer and palm-sized coconut pies — all of which she made herself. The well-regarded vendor has stayed civically active during her 35 years living in the predominantly Black and Latino city, often finding it helpful to plan in advance for Election Day.

Foster, who assists her 96-year-old father to the polls, knows first-hand the difficulties people experience trying to cast ballots, many of which might keep voters away altogether. Some folks work multiple jobs. Trains get delayed. Rush hour traffic clogs the highways. Anything can happen, she said.

But Foster didn’t know that early voting was on this year’s ballot — a measure which, if approved, could give people more time to vote in person before Election Day.

Ranging anywhere from three days to 45 days, early voting has already helped more than 17 million people in places like Florida, Georgia and Texas, according to the University of Florida’s U.S. Elections Project. And this year’s midterm election turnout is on pace to match 2018’s, which saw some of the highest turnout in U.S. history, in large part due to early voting.

Connecticut is one of only four states that doesn’t have early voting, making the seemingly progressive “Land of Steady Habits” one of the more regressive places to vote outside of the South. The state’s contentment with the status quo is keenly felt by some Black and Latino voters, who have historically borne the brunt of voter suppression and who nationally experience longer wait times than white voters.

The effort to bring early voting to Connecticut has also resonated with advocates who for years have pushed to make voting in the state more accessible.

“Change comes very slowly to Connecticut,” said Laura Smits, president of the state’s League of Women Voters. “We don’t like change, and we fold our arms and say, ‘Not for me. I’ve done it this way for 100 years, and why can’t we keep doing it this way for 100 years?’ And I just think that that same malaise that we see throughout the country is changing, and a lot of folks are not happy about it.” 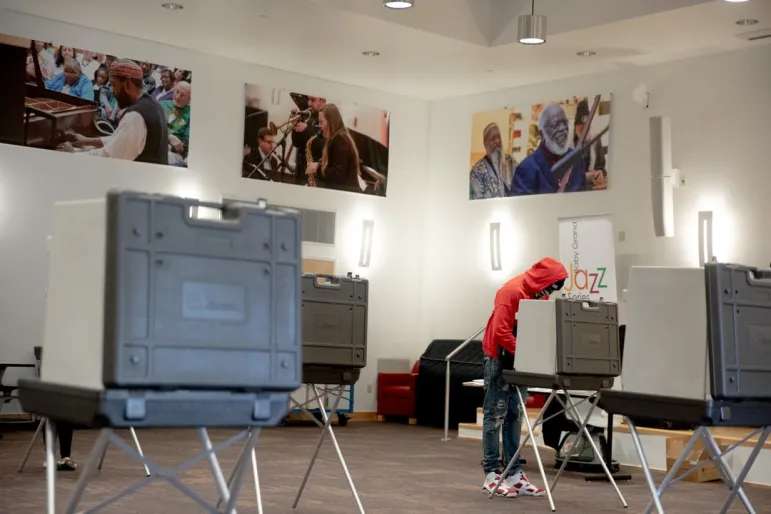 Connecticut’s voting laws are enshrined in the state constitution. Any changes to it first pass through the House and Senate with three-fourths majority support, or a simple majority in both chambers in two successive legislative terms, and then majority support among voters. This year marks the second time that the convenience voting measure has made it onto the ballot. The first attempt failed by more than 38,000 votes during the 2014 midterm.

Political experts attributed the previous rejection of early voting to confusion, uncertainty about giving the state legislature more power, and racial and partisan divisions, according to The Hartford Courant. Early voting then was grouped with no-excuse absentee voting, a different convenience measure that allows for any voter to request and cast an absentee/mail ballot without an excuse.

Voting in Connecticut was once limited to white male citizens with valued property. The state recently expanded voting to allow for absentee ballots from people who have or are around sickness, or if there’s a continued presence of sickness — such as COVID-19. Now access could further expand after November if the majority of people vote favorably to a simple question: “Shall the Constitution of the State be amended to permit the General Assembly to provide for early voting?”

But the addition of early voting does not make up for the fact that many people are uninterested in elections, said Andrea Benjamin, a professor at the University of Oklahoma who studies race and politics.

“If they vote on Election Day, it might take them an hour and a half to get through the voting process. If they vote early, maybe it only takes 25 minutes,” Benjamin said. “I want people to have access to the ballot. … At the same time, I think we need to start thinking about civic education. What are we teaching people about why voting is important?” 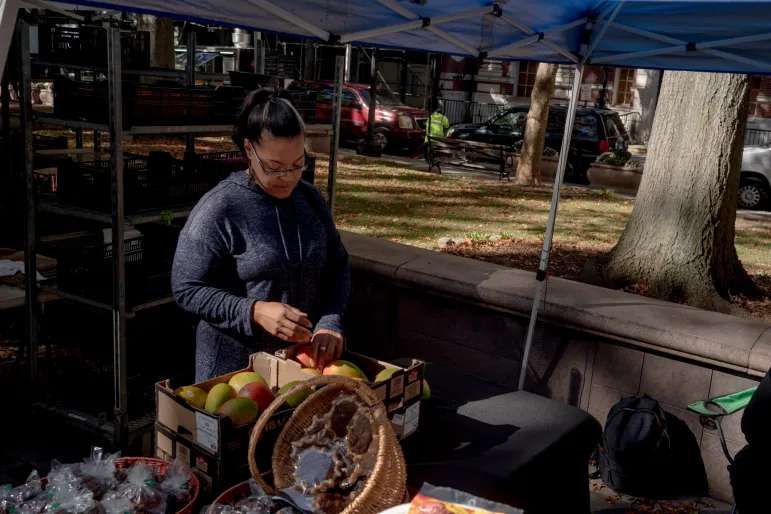 Alicia Cobb considers herself an emerging leader in the Bridgeport community and said she is making an effort to get more civically engaged. But the self-employed artist also did not know early voting was on this year’s ballot.

Cobb said she understands that some people have tried to make casting votes more accommodating over the years. But she believes voting is just not as accessible to people who work less-traditional hours — disproportionately Black, Latino and low-income people, according to the Population Reference Bureau.

“If you can’t make it to the polls for that day, for whatever reason, then you just miss out on your vote,” said Cobb, standing near Foster’s blue tent at the farmer’s market. “That’s exactly what it’s set up for, is to make it more difficult for the people who are less fortunate and less advantaged to not have access the way that they should.”

Connecticut has a history of making voting more difficult for people of color.

The state once received a series of petitions from Black people pleading for either the right to vote or exemption from paying taxes (the General Assembly denied them), was the first to require literacy tests for voting (effectively barring people who could not read from the ballot box), was slow to outlaw literacy tests (an order that trickled down from the federal government when the Voting Rights Act was amended), and was slow to ratify the 19th Amendment (which granted some women access to the polls). 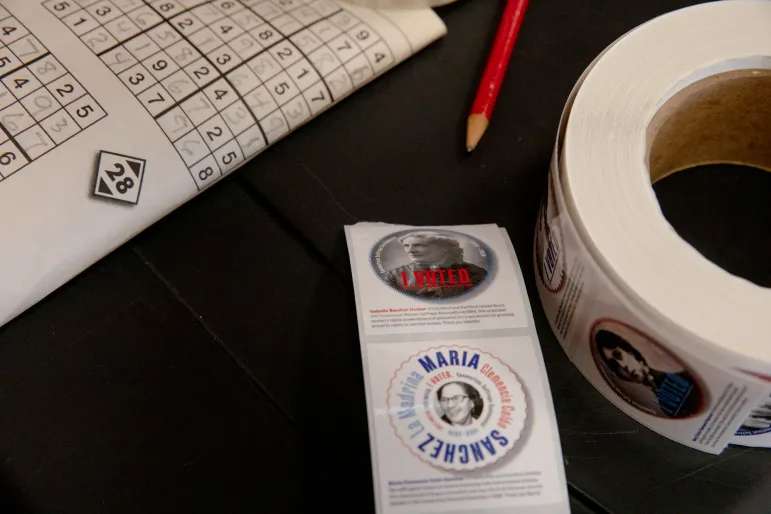 White people in power have historically wanted to keep voting to themselves, said Steve Thornton, who studies the history of working people in the state. Thornton said lawmakers have put up as many barriers as possible to keep certain communities disenfranchised, because voting is “all about power.”

“Connecticut has never been a progressive state when it comes to voting rights,” he said.

Voting access has remained a hot-button topic. During an October Secretary of the State debate, Democratic candidate Stephanie Thomas said she is “a big fan” of early voting. Republican contender Dominic Rapini called the measure an “unfunded mandate” on registrars of voters who run the local elections.

Peter Gostin, a Republican registrar in New Britain, told the CT Mirror that he does not support early voting because of the additional strain it would put on election workers. But if it was law, he said, they would make it work.

Giselle Feliciano, a Democratic registrar in Hartford, said she and her team would also figure out how to accommodate it.

“We try our best to complete the job to the best of our ability,” Feliciano said. “Will we probably have bumps in the road? I don’t think Hartford will be the only one. But you learn from those things, and hopefully we can move forward. I do feel that with the early voting, we’ll be ready.”

Other states have adapted to expanded voting access for decades. Jennifer Doinoff, an elections administrator in Texas, the first state to offer early in-person voting, according to Time magazine, told the CT Mirror that she recommends that Connecticut codify a detailed plan into law.

“I’m a supporter of early voting, but I think that it’s very long,” said Doinoff. Texas currently has two weeks of early voting. “We add days to it and then we add weekends to it. And then we want to add more hours in the day to accommodate everybody’s schedule. And then, eventually, you can’t find people to do it. And it also is cost exhaustive. So I believe in early voting, but I think that we have to come up with a plan. That is a reasonable expectation for the people that we employ to do these jobs.”

Democrats tend to favor early voting more than Republicans, according to the Pew Research Center. But some Connecticut voters do not view access to the ballot box as a partisan matter. They consider it a core tenet of democracy. They think that any person who wants to cast their ballot should have the freedom to do so without racial or socioeconomic barriers. They also believe that if 46 other states have figured it out, Connecticut can too.

Sophie Kane, a third-year student at Yale University, said that she and others on campus view conversations about convenience voting as part of a larger struggle to make this country’s democracy accessible to everyone.

“Engaging with those sorts of issues on that sort of scale is really important to us,” said Kane, who chairs the campus’ Yale Votes organization, “even if we can’t always be thinking about the larger scale issues, because that is just hard to engage with on a day to day basis. But this is what motivates us.”

Eli Moreyra, a second-year student at Housatonic Community College in Bridgeport, said his class schedule is packed, which could prevent him from voting. He wants to do well on assignments. He works multiple shifts a week as a waiter. He also likes to spend time with his friends. The 19-year-old said it feels like, by having minimal voting options, the state is encouraging people not to participate.

“Going to one of those polling places is just a big hassle; it’s not just you trying to go and vote,” said Moreyra, his voice competing with a musical performance at the farmer’s market. He believes voting is limited to people who really care about elections, “instead of opening the door for everybody to really throw their thoughts on it.” 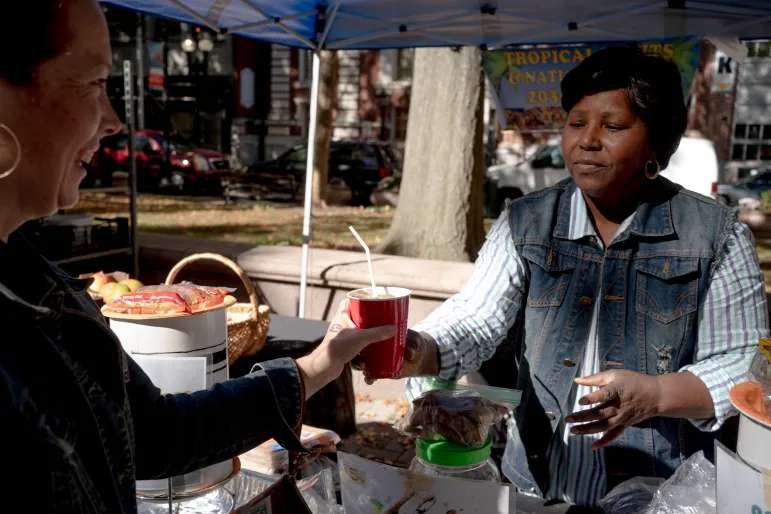 For nearly four hours at the farmer’s market on a recent Thursday, she chatted with folks about the cost of living, visiting Jamaica, AirBnBs, her son and early voting. Her conversations withstood the music, wind, sirens and lawnmowers. By the time afternoon rain started drizzling on the tent, she was adamant about searching for the ballot question on Nov. 8.

“That would be a great idea,” Foster said. “If you could get it done a week or two before, I’m all for that.”

Some may think this article is trash..I personally don’t think it rates that high.

We should be asking ourselves why it takes 90 minutes to vote in some cities. The same cities that received billions in subsidies. I’m off for early voting but does anybody really believe that these corrupt cities will get their act together even if it’s enacted? How does early voting prevent things like running out of ballots, sending the wrong voter rolls to the wrong polls, registering people after 8:00 p.m. on election Day and then allowing them to vote, etc…

Leave it to the libs to associate every aspect of normal life with white suprem acy and racism.