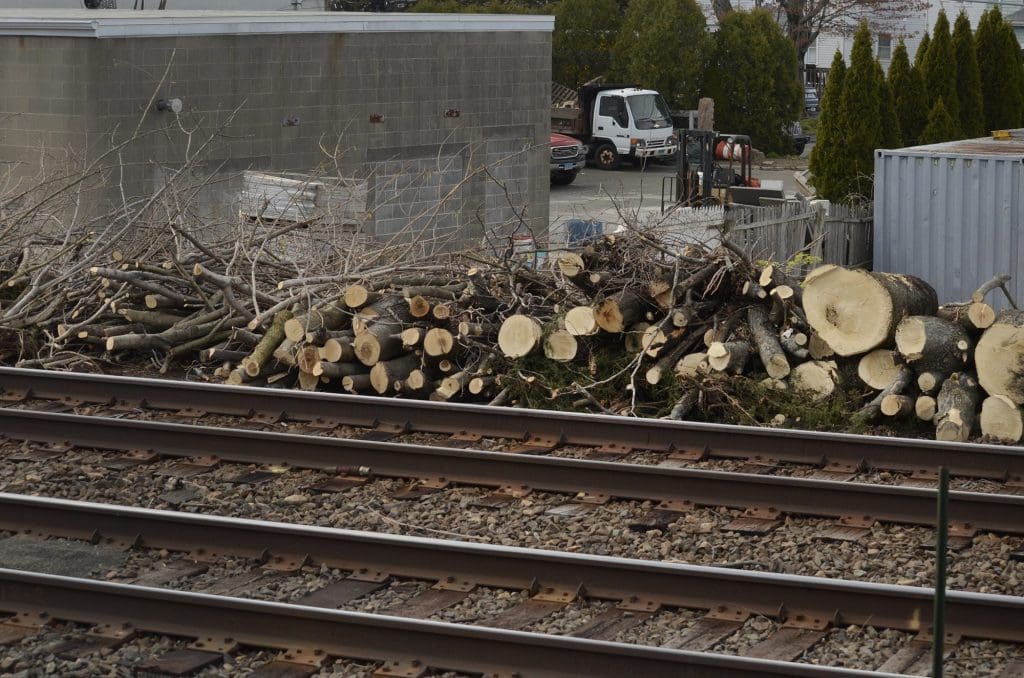 Cut trees piled up along the railroad tracks, Saturday in East Norwalk.

NORWALK, Conn. – As some folks were preparing for Earth Day, others were cutting down trees.

“The complete destruction of the entire tree line along the Norwalk Railroad tracks is horrific!!!!” Katherine Snedaker said Friday in an email to City officials.

Snedaker wanted the City to stop the carnage but Planning and Zoning Director Steven Kleppin told her the work was being done by the Connecticut Department of Transportation.

“The City is equally upset,” Norwalk Chief of Staff Laoise King wrote to Snedaker. “This is a joint Eversource/Metro North project that is happening all along the New Haven Line. Unfortunately, the City has no authority to stop them.”

King said, “According to Eversource, the trees, which were planted long ago, have grown into the wires, which creates a hazard for train travel. Eversource is required by state statute to remove any trees interfering with wires. When we learned of the work we advocated strongly for leaving any trees which could safely remain and obtained a commitment from Eversource that they would replant trees which grow to a lower height to avoid this ever having to happen again.”

DTC member Sheri McCready Brown told her the project had “been going on for a long time” and it stemmed from a family being killed when trees fell on their car.

“There have been many trees that have fallen on the Merritt Parkway, not only on cars, but also across the parkway and blocking all the lanes,” Mayor Harry Rilling said. The road dates to the 30s, the trees are even older and “they started to become weak and started to fall more frequently with all the storms we’ve been having. It’s also my understanding now that many of the trees that have been cut down will be replaced with newer trees.”

According to the Connecticut Trust for Historic Preservation, ConnDOT increased the clear zone along the travel lanes from 18 feet to 30 feet, the national standard.

In another tree cutting incident a year ago, Norwalkers were upset when ConnDOT cut down old-growth oak trees along Riverside Avenue as part of a Norwalk River Valley Trail expansion.

The trees were on “property that is either owned by the State or where the State has a right of way… therefore, the State was the decision maker about what trees were to be removed for the building of the trail,” Tree Warden Chris Torre said at the time.

King told Snedaker on Friday that while the City couldn’t stop the destruction, it’s working toward increasing Norwalk’s greenery.

“We know that a healthy and robust tree canopy is essential to healthy, active and beautiful neighborhoods,” King wrote. “The mayor and council have recently committed close to $1,000,000 over the next two years to expanding and growing the City’s tree canopy, including $150,000 in this year’s capital budget.”

Clearing older trees that can fall on roads, railways, and electrical lines makes total sense. We have had too many instances of service interruptions caused by downed trees too close to roads and wires.

Lol this outrage is hilariously misguided. “Don’t cut down the trees that could risk a major fire!”… as if we’re killing some pristine, sacred forest right here in the middle of suburban Connecticut.

Meanwhile, these pages are full of NIMBY homeowners protesting the sort of densification that will help keep us from being forced to build MORE suburbs that kill thousands more trees and generate all kinds of other negative environmental impacts. The greenies could be spending their time pushing back against this… but NOOOO, let’s hug some trees, guys, and hope they don’t burn our houses down in a few years.

These people don’t care about the environment enough to look at the big picture. They’ve just been taught by Earth Day marketing to worship every single tree. And that somehow, if they just worship hard enough, they’ll manage to “save the planet”.

They’re quite. literally. “missing the forest for the trees”.

So maybe the multi family contracts will start to build as the trees are removed. Let’s keep in mind zoning w/in a 15 Mike radius of a transportation hub is in the states hands now.
Anyone in construction knows about this, and the multi family complexes contracts… or should. IJS lots of trees gone in my area too, it’s our eco system. We should respect the significance to what ECO SYSTEM is.

@V: That’s a lot of innuendo. What, you couldn’t focus on the trees at hand, so you had to bring up every tree in the area BUT the ones that were cut down?

And you complain about all the bad things that happened from these other trees getting cut down, but you don’t say what’s actually going to happen to East Norwalk by the tracks. Judging from the picture, erosion is the biggest risk, not “poisonous fumes” or “flooding”.

What has just been mentioned—the clear cutting of the Merritt (and the Wilbur Cross) in Connecticut reeks of money flowing to the tree (murderer) companies that benefit from tree slaughter. What happened to arborists? Does anyone in positions of power recall basic science that trees absorb carbon and that cutting down trees will now result in poisonous fumes for those living along the parkway? And flooding…oh, and yeah, chaos in the world of wild animals and insects who co-exist with us.

It is Norwalk itself that has proposed a plan to cut down mature trees in the Wall Street area to accommodate car parking. And Norwalk could negotiate with Eversource to bury the electrical wires (as Metro North should have). Cutting back trees to protect electrical wires is deranged given that the only way to protect Norwalk from power outages is to bury the lines. Stronger and stronger winds and heavier rains and snow are coming with climate change. Killing the trees is going to accelerate that horrendously. The wires can be torn off the poles by the winds.

And the tree companies now have the fanciest equipment from the flow of money into their business. They will need to keep on cutting things down and persuading customers to have their trees taken down to continue to profit. Again, where are the arborists who MAINTAIN living trees?! In the Bettswood neighborhood alone more than 20 mature trees have been cut down this year. No replacements have been planted.

Ironically, Norwalk is recognized as a “Tree City” according to the Arbor Day Foundation. Arbor Day—this Friday, April 29, 2022—should be a day of mourning.

Wow, another example of human collision with nature. Why do we still have 19th-century overhead wires in an area that is naturally wooded? Is Eversource our Lord and King? Is the state run at the beck and call of Eversource? Do the citizens of our city have no voice? I really don’t get this.

We need a new system, a new way forward. Here we have a tree canopy lacking in Norwalk and yet more trees are coming down, possibly out-pacing the planting of new (smaller) trees. Trees, as we all know now, are necessary for the health and survival of nature itself and humans by extension. We have got to start doing this right.

Eversource and the tree companies and those making money from us at the expense of the earth–THAT is the system that has to be transformed legally and politically. If elected officials are not able for whatever reason to stand up for the environment, let’s work together with our officials to remedy this once and for all and find ways to resolve this so it doesn’t keep going “off the rails” like this event.

With all of the digging going on all over town by other utility companies, it’s still ridiculous that we even have overhead power lines.

the cheapest, easiest route is cut trees and run wires. Maybe one day our local politicians will require Eversource to run underground lines.