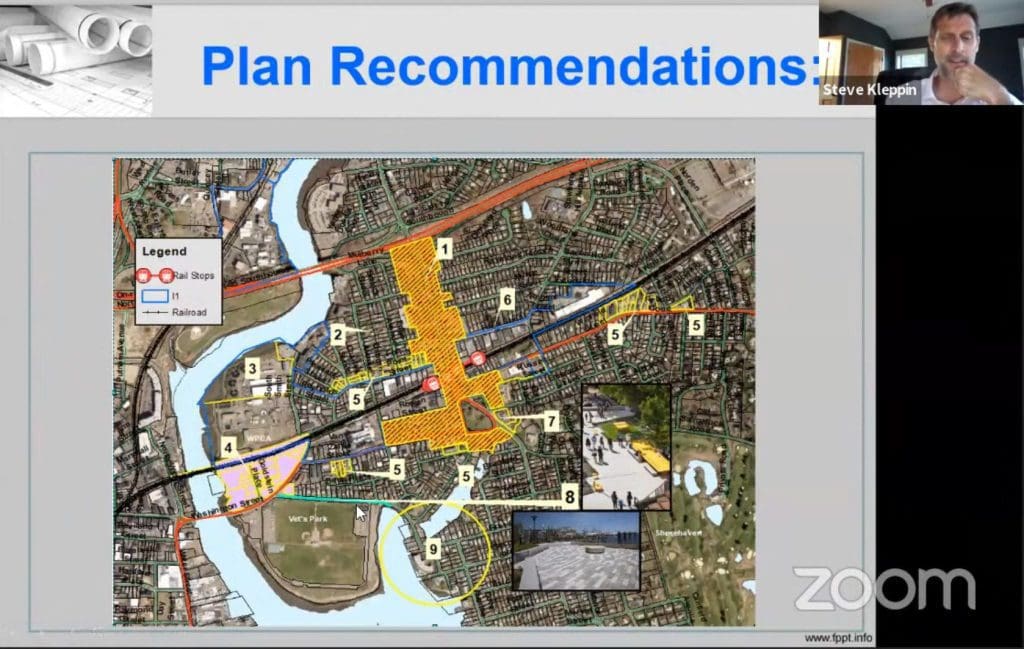 Most of the 11 residents attending a public hearing on proposed zoning regulations changes spoke in frustrated opposition to encouraging development, complaining that their input has been ignored.

DiMeglio, sitting on the other side of the aisle as Planning Commission chairwoman, said that as a resident she doesn’t know what the answers are. But she added that the area, though not without charm, needs help if it is to thrive.

At issue are the specifics for a village district already agreed upon as part of the East Norwalk Transit Oriented Development plan. Diane Cece, who served on the East Norwalk TOD Oversight Committee, explained, “This essentially is the implementation of the plan by creating a zone that allows it, and then defines the design guidelines that actually helped to create it.” 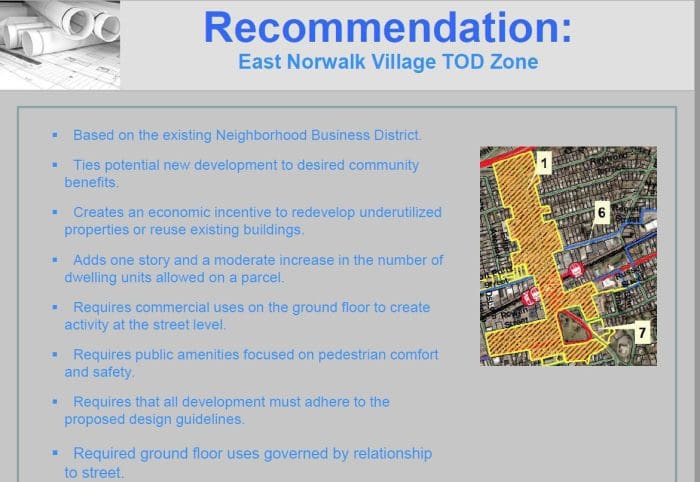 Speaking as a resident, Cece reiterated that the plan had been broadly rejected by members of the community who feel their “serious concerns” are not being heard.

When Planning and Zoning obtained a grant for an East Norwalk TOD study in late 2017, “I personally thought that we were looking at something that would possibly improve East Norwalk, mostly from an aesthetic point of view, but also to provide some public amenities, versus what this seems to have turned into, as everyone else has told you: a massive development plan that really stands to benefit mostly the developers,” Cece said.

She fought the plan from the inside as a committee member, a minority voice. But it went on to Common Council approval and last week’s hearing was strictly on the incentives for developers.

In return for providing amenities, developers can qualify to build an extra story higher in the village district, a 35-acre area within the overall 500-acre East Norwalk TOD Zone, roughly either side of East Avenue heading south from Interstate 95 and jutting over to properties along Van Zant Street.

Land on either side of the railroad tracks falls within an industrial zone not included in the proposed changes. Specifics will be determined later.

Residents can submit written comments through the end of business Friday. In response to public input, P&Z staff will tweak the proposals and bring them back to the Zoning Commission, hopefully concluding the ensuing process by the end of the year, Planning and Zoning Director Steven Kleppin said. 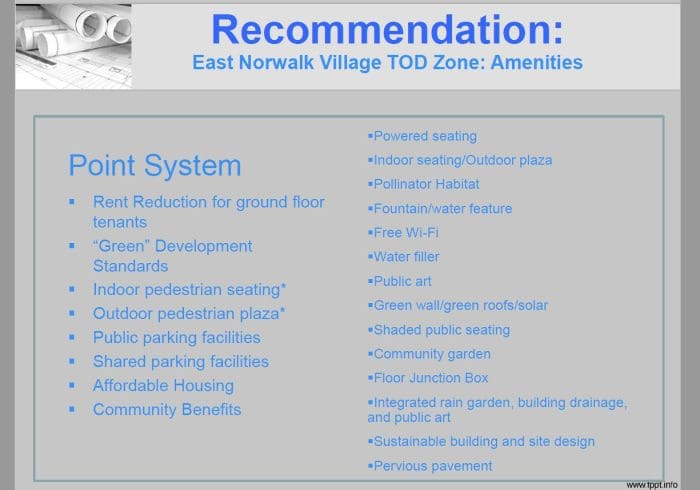 In exchange for such amenities as pollinator habitats, public gathering spaces, rooftop solar, and, for larger projects, geothermal energy production and porous pavements, developers would be allowed to build up to 45 feet, as opposed to the 35-foot height normally allowed.  P&Z has developed a point system, attempting to quantify the “carrot and stick” approach.

“We’re giving something, but we’re getting something. So that’s the model that we’ve tried to follow. I think using a point system as opposed to how we’ve structured it in the past is much clearer for folks,” Kleppin said.

None of it was popular with most of the public speakers.

The points system “feels like it’s heavily stacked against those of us who live here already. And I don’t know what the desire is to, to give the developers all this this extra gravy,” Sarah Hunter said.

“I’d say go back to the drawing board, because we’re not even beginning to get close to what the residents should … on balance be given for what all of that density would do,” she said, adding that decisions shouldn’t be made behind closed doors via a point system.

While there’s subjectivity in the amenities, “the Commission is going to have to take a look at this and make sure that we’re not getting the same repetitive development on all these parcels,” Kleppin said. “So, the special permit process and the public hearing process gives you more say and more leeway than you would have otherwise.”

“Perception is reality,” Mimi Chang said. “And the perception among lots of us here who’ve shown up over the years and provided input is that we’re not being heard. We don’t want overly dense, overly tall McMain Street potentially swallowing up quintessential New England-style colonial homes on East Avenue, creating a canyon effect while adding more vehicle congestion and trapping more carbon monoxide. They’re rendering bike-ability obsolete. East Norwalk is rich with history that deserves to be showcased.”

The TOD project at 230 East Avenue was approved ahead of the TOD plan itself, and while Spinnaker Real Estate Partners agreed to provide amenities such as rooftop restaurant and public seating areas, they “never came to pass,” Roberta DiBisceglie said. “This community deserves a Main Street with trees, places to sit, and innovative retail. Let’s not make it mostly bars and restaurants, like the majority of retail space in South Norwalk. Let’s also not turn these important amenities into a way to entice developers to build larger buildings. We do not believe that the city should spell out our quality of life by increasing density and continuing to put a strain on our already overtaxed infrastructure.”

Kleppin was later asked about the wastewater treatment plant being able to handle development. Repeating information provided at many public meetings, Kleppin said the Water Pollution Control Authority feels that the plant can handle development, even including the extensive plans for Glover Avenue. 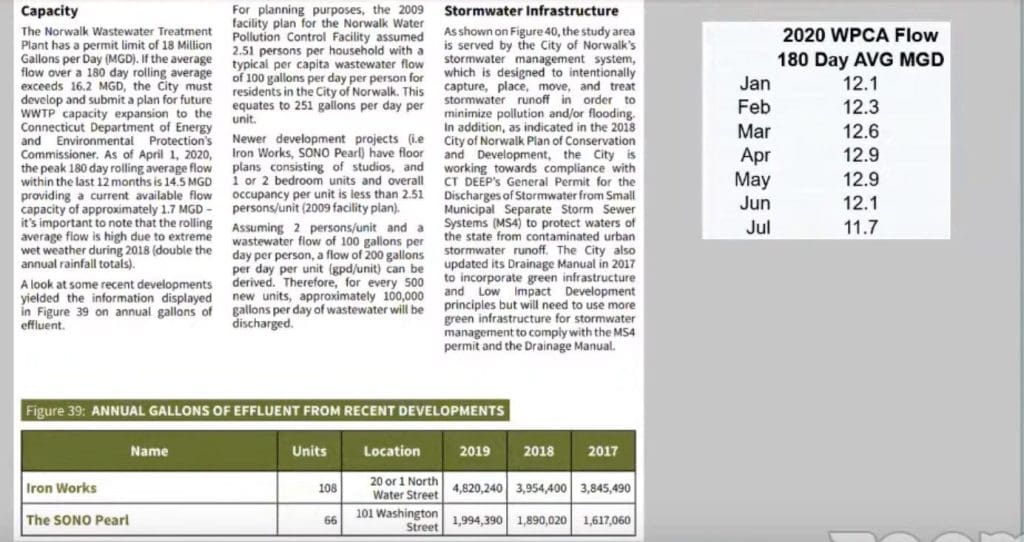 A page from a Planning and Zoning PowerPoint presentation, showing wastewater information.

“Water consumption in the city has actually gone down over the years. And the reason that has gone down is when these projects redeveloped, it’s all new infrastructure that goes in,” Kleppin said.

P&Z is ignoring the worsening traffic, some said.

“I would think as the constituents of the area that you should all hear the feedback that you’re receiving from the folks that on a daily basis, deal with speeding traffic, 15-minute wait times to get from the Wells Fargo to 95. Every morning, it’s untenable, to say the least,” Jim Papadakos said.

“We do acknowledge that East Avenue is an issue. We think over time, it’s going to improve,” Kleppin said. P&Z does peer review on all traffic studies for new projects, and the city has “new faces” in the Transportation, Mobility and Parking department (TMP) and while some decry the Walk Bridge-related work planned for East Avenue, “It’s not just widening the lanes, it’s getting rid of the kind of slalom course you have to run on East Avenue.”

Some referred to a misinformation campaign.

“I know people were circulating things… that were not, you know, obviously did not represent… anything anyone had planned,” Patricia Prince said.

The one thing people do not want is 1,200 to 1,800 apartments on East Avenue, Gene Tiernan said. “That doesn’t make any sense at all. That does not solve a single problem of ours.”

Planning Commissioner Mike Mushak asked Kleppin if that was an accurate prediction. 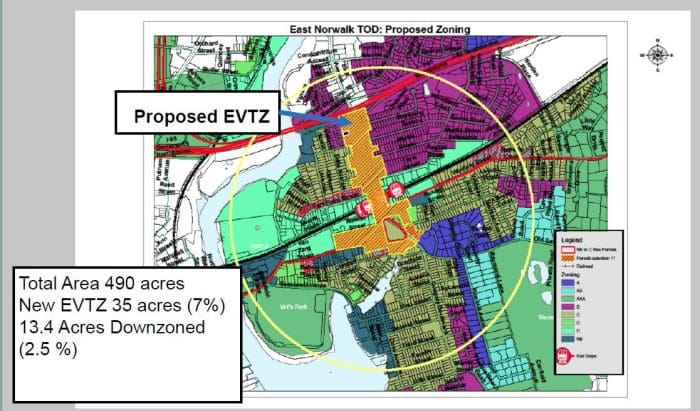 “It’s very high,” Kleppin said. It’s “just a mathematical calculation” made by taking the area involved and dividing it by the allowed density without taking into account the parking spaces and public amenities, resulting in “not a realistic number.”

The village district stems from the city-wide master plan, Kleppin said. Consultants observed that Norwalk is a mix of neighborhoods that have tried to develop into a city.

While that’s true, “every quadrant of the city has its own uniqueness… preserving some of that is important to the feel of the residents here,” DiMeglio said. The amenities need to add real value to the area and “some of these things have to be sharpened up in my opinion, in what gets done and what gets points and what doesn’t get points.”

We were told that there were 40 something people listening to this meeting, which is a notable difference from the only 11 people cited in this coverage. We weren’t able to see the number or even names of other residents attending, so a resident had to ask why and how many were listening in Q&A.

Also, lack of holistic traffic feasibility study to determine if the East Avenue corridor could even withstand a phase in of several hundred vehicles on an already problematic corridor was prominently discussed. I asked for an answer as to why there is no plan for an impartial traffic study if the functionality of the current hot mess East Avenue corridor is integral to the success of this East Norwalk Neighborhood TOD Plan, and I did not get an answer, as is usual.

That Mr. Mushak and Mr. Kleppin now seem fuzzy on the 1,200 + apartment units number is something else. Mr. Kleppin earlier on in this process was throwing 1,500 units out there, then came down to 1,300 units after residents deemed his estimate excessive. Residents kept voicing concern about the number, which eventually came down to 1,200. Easy to find in recordings of meetings. Hundreds of residents polled found an estimate of 1,200 units too aggressive for the East Avenue corridor and cemetery area.

If this isn’t going to be senior housing or units for people without children how can East Norwalk or Norwalk Public Schools System in general support more children going into the classrooms. We are already at high capacity per classroom and many teachers aids have been omitted through the passed few years for the younger children.

Give us a PER CLASSROOM, each and every school in our district, ratio of teacher to children. Then tell me how we can put more families into an area. East Norwalk is a tiny neighborhood – it can not support the traffic it already has NO MATTER HOW A ROAD IS WIDENED. Open your eyes folks.

Just a comment about the “property right off of the Exit 16 just sitting there” (vacant since I moved to Norwalk in 1994).
On winter days I’ve walked from the I-95 park & ride lot to the East Norwalk train station. Snow and ice are untouched on the sidewalk along that property. I’ve sometimes had no choice but to walk in the traffic lane, which is extremely dangerous.
The requirement for property owners to clear snow and ice from their sidewalks is an important walkability issue.

To the East Norwalkers who know anything about Stamford, I have 3 words for you: Cove Road Area — Take a ride down Cove Road and you’ll see what your district will look like in 15 years if you let these “planners” destroy your neighborhood. Freaking ridiculous – Don’t constituents have any voice here?
Another reason to vet candidates before actually pulling the lever on Election Day.

I attended and participated in several of the town hall style meetings and workshops focused on the East Norwalk revision. It was and continues to be apparent that there is a plan that some few officials favor and intend to force upon the residents. The residents attending the many meetings strongly objected and rejected many of the bullet points still be jammed down our throats.

The amenities point system “rewards” developers for doing what they should do to start with. For example – Roof top solar panels are of no benefit to the residents. It seems the point and reward system benefits the developer only – which developers came up with this scheme?

The Walk Bridge project is being used as an excuse. Widen and lowering flood prone East Ave so 19 wheelers have easier access to East Norwalk is just stupid. There area floods several times a year. Now the floods will be wider and deeper – great.

I wonder what the motivation is to ruin East Norwalk.

Does anyone know of a growing CT City embracing “renters bring growth” ? Or any City espousing such elsewhere ? Houston we have a problem !

Yikes. The YouTube video is 3 hours and 17 minutes long. Such efficiency