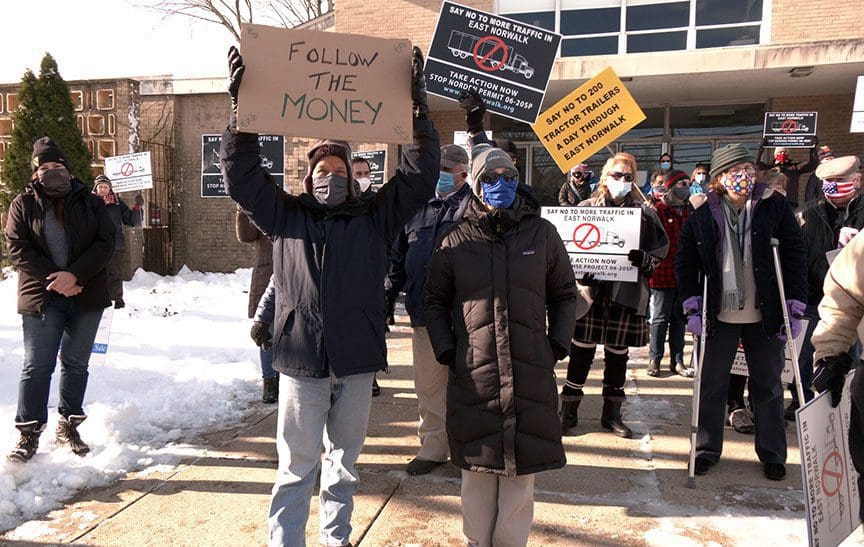 NORWALK, Conn. – East Norwalk neighbors have hired a lawyer in their quest to block a distribution center from going into Norden Place.

“This warehouse project… is expected to bring more 100 trucks a day into East Norwalk, that’s 36,000 trucks a year,” Farhan Memon said Saturday, representing the newly-formed Sasqua Hills Neighborhood Association at a press conference. “Our streets weren’t built to handle that type of traffic. They are used by pedestrians, bicyclists, residents going about their daily business, whether it’s shopping or running their errands. Having semi-trailer trucks on our streets day and night will make our streets extremely dangerous. My 12-year-old son for example rides his bike from Winfield along Triangle up Strawberry Hill to William Street. That’s the same route the trucks are going to take. And so, my wife and I are not going to let him do that anymore.”

“This undertaking is very expensive and to help defray the cost SHNA has established a Go Fund Me page,” Memon said. “We want all neighbors to participate. It’s our community we need to keep our neighborhood livable, our streets safe and our air clean.”

Mayor Harry Rilling was on hand to encourage opponents of the project, which seeking approval from the Zoning Commission now. 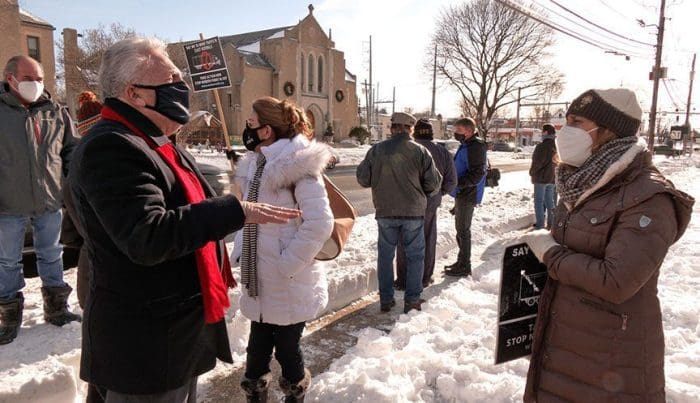 “Keep the pressure, keep writing. The Zoning Commission does listen….Look at what they did on Winfield Street. They denied that, because people spoke up,” Rilling said to about 50 people on East Avenue.

The Zoning Commission turned down the proposed 14 apartments at 93 Winfield St. last week on a 3-5 vote. The developer is free to come back with a modified proposal.

It’s illegal for a Mayor or any other City official to interfere with a Zoning Commission decision. Rilling said he’d consulted Corporation Counsel Mario Coppola and was advised that he is allowed to express his opinion of the project.

Zoners are considering a proposed conversion of a 330,000 square foot portion of the existing building located at 10 Norden Place, to create a new warehouse and wholesale distribution facility with 19 loading docks and changes to the site’s existing parking lot and driveways. It’s estimated that the business will produce 180-190 truck trips a day; owners promise to keep them between 6 a.m. and 8 p.m., “to the extent commercially practicable.”

It’s not allowed as of right, and should be denied “because it will so negatively impact our community. There are no access points for 200 or more trucks a day except through our residential streets,” Diane Cece of the East Norwalk Neighborhood Association said.

“These out-of-town developers think we are so ignorant as to believe they’d spend millions renovating a building on spec without knowing who the tenants will be. They say residents’ complaints are speculation, not based on expert facts. Yet everything they have presented is speculation if they don’t identify the tenants,” Cece said.

“The warehouse project will also cause home values to decline drastically,” Memon said. “Depending on how close your house is to the warehouse we believe that housing values will decline 5 to 15 percent. At the public hearing we plan to have appraisers who will testify to that.”

I’m with East Norwalk Neighbors!! No Norden warehouse!! Please keep me posted! I’m sorry I missed Saturday’s protest to the opposition. I’ll be at the next protest!!! Thank you!

The neighborhood present land use would change from 95% residential land use to 70% residential land use and 30% commercial/ industrial land use is a family neighborhood! This makes absolutely no sense to diminish the values of the single family residence in the area. East Norwalk is considered a waterfront community. Why would you introduce Mac trucks into a residential waterfront community. And the fact that the Neighborhood consists of so many children riding their bikes people walking their dogs how could we see with all these Mack trucks going down residential streets this makes absolutely no sense to me what so ever. My grandson rides his bike from First Street to Westport Ave. Would you let your grandkid ride his bicycle on the streets with all these Mack trucks. Thank you Lori