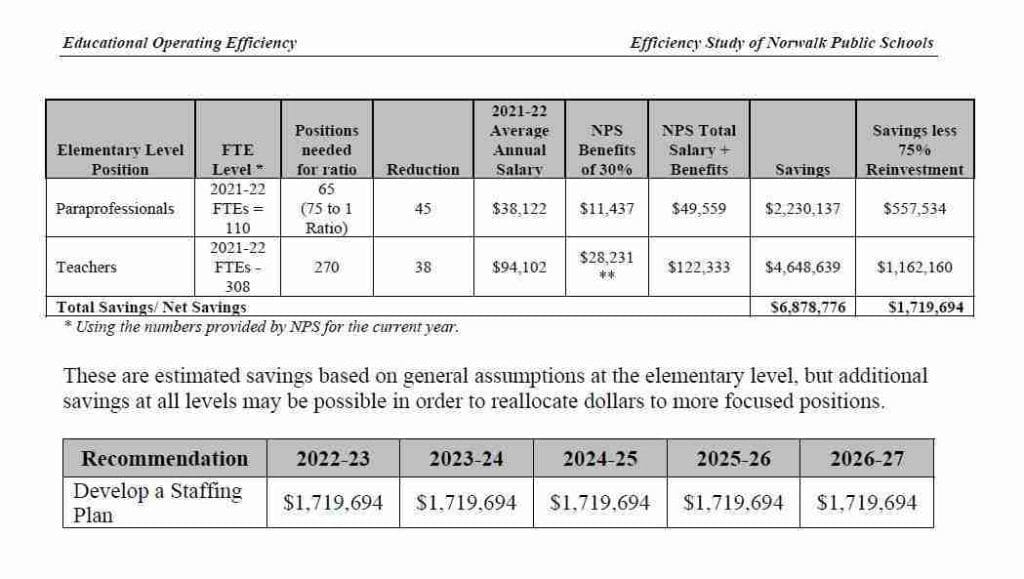 That’s just for the elementary level, Evergreen Solutions states. Applying a “focused” staffing approach at other grade levels could result in additional savings.

Evergreen, in its efficiency study, also states that NPS could save at least $500,000 a year by revising its stipend procedures. “Organizing and simplifying extra duty pay” could save $1.5 million in the coming school year, by “returning to a traditional Summer School program,” according to Evergreen. “Additional savings may be possible during contract negotiations in future year, but cannot be estimated until negotiations are final.”

Evergreen presented the results of its study Tuesday. City staff got a look at the school-side report Monday, a source said. It was shown to school leaders and designated staff Feb. 16, according to Evergreen.

Norwalk Public Schools Chief of Staff and Communications Brenda Wilcox Williams and Norwalk Superintendent of Schools Alexandra Estrella did not respond to a Wednesday email asking for a response to the suggestion that the school district could save money by “developing a staffing plan.” Norwalk Federation of Teachers President Mary Yordon didn’t respond to a Tuesday email asking about it. 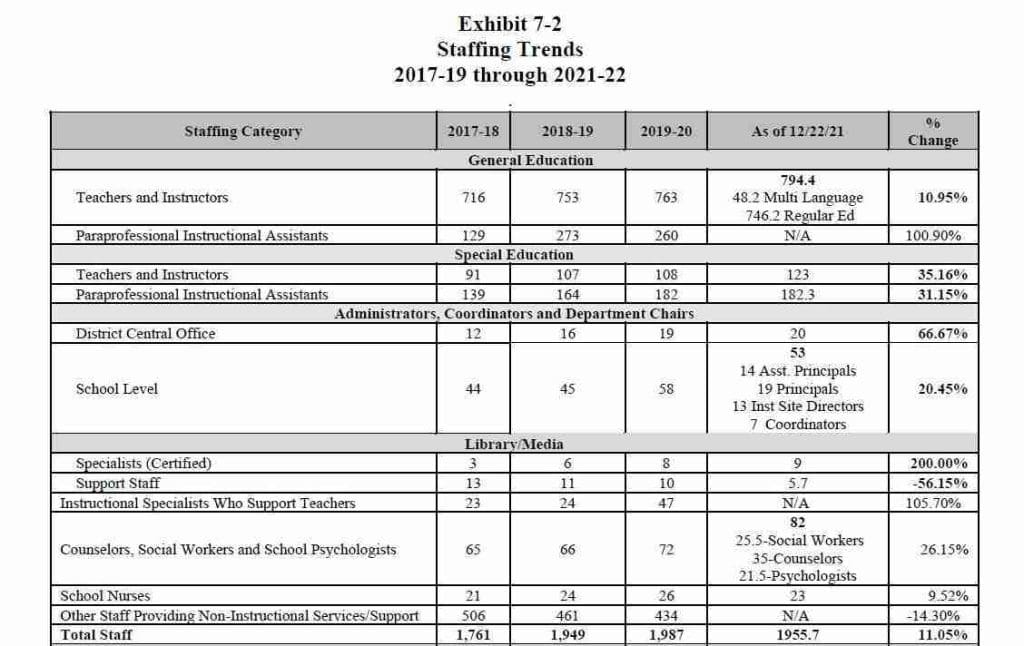 Central Office staff has grown 66.67% since 2017, from 12 to 20, Evergreen states.  When Estrella took office in July 2020, the administration began updating and aligning positions, organization charts and job duties. Central Office roles were restructured to better align with the strategic operating plan.

“Interviews indicate substantial turnover in critical areas, such as Human Resources and Legal Services, and changes in titles have caused confusion,” Evergreen states. “Communication as to which positions do what, and where positions are housed within the organization, is needed to clearly delineate and communicate employee roles and responsibilities.”

Evergreen recommends eliminating the positions of Chief of Staff and Communication, Communications Manager, and Executive Assistant and reorganizing the communications function under the Deputy Superintendent. The company predicts this would save $149,500 a year.

Some of that would be cancelled by another recommendation: Evergreen suggests spending an additional $46,535 a year to “ensure adequate monitoring and accounting of Freedom of Information Act requests.”

One of the positive notes: “Campus-level administrators and instructional support personnel are equitably allocated to campuses based on enrollment and need,” the study states. 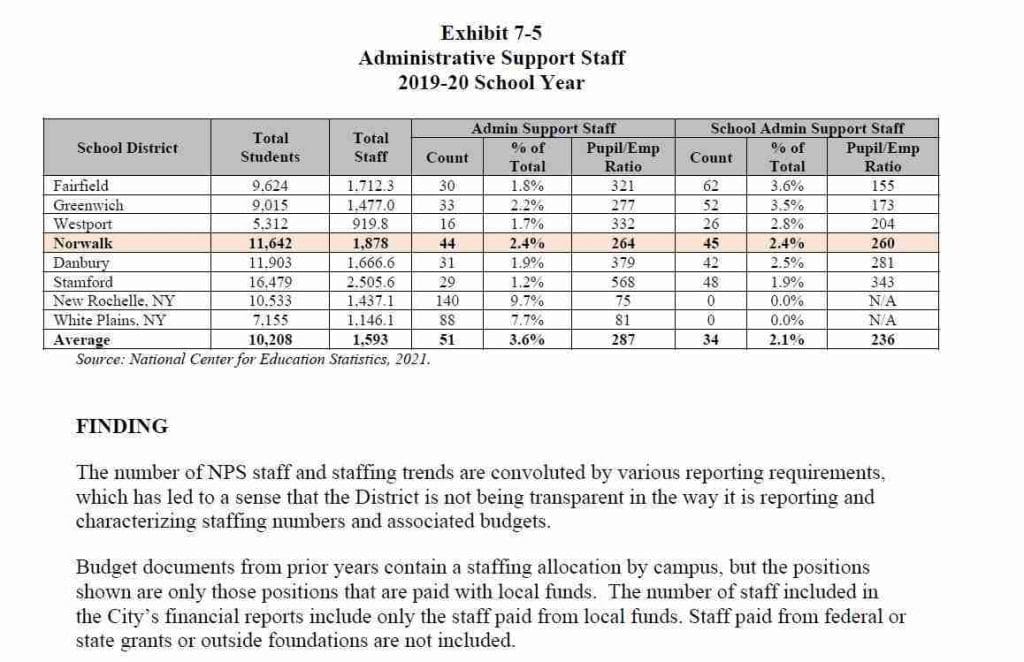 Betty Ressel, in presenting the efficiency study Tuesday, spoke of the “staffing plan” issue. It’s not a recommendation that NPS cut staff but realign personnel, she said.

The recommendation is “not intended to be prescriptive,” the study states.

Evergreen estimated savings by “establishing a goal of maintaining an average student to regular education teacher ratio at the elementary level of 18 to 1 based on the 2016-17 ratios, and a student to paraprofessional level of 75 to 1 (taking into account the growing number of students with special needs).”

This would “reduce” the staff by 45 paraprofessionals and 38 teachers. That’s estimated to reduce expenses by nearly $6.9 million, but a “75% reinvestment” would result in a $1.7 million reduction. Again, that’s for elementary grade levels only.

In addition, “Stipends, supplements and extra duty pay for certified staff as outlined in the bargaining agreements are convoluted and difficult to track and budget,” Evergreen states. It recommends that during the next contract negotiation process, NPS should “organize and simplify the extra duty pay categories and search for ways to immediately begin reducing total costs.”

Reactions to the initial presentation were mixed on the Facebook page, Norwalk Parents for Education.

“I found in interesting that the {Common Council} didn’t ask (because obviously none of this was found) about the Supers supposed ‘slush fund’ as well as the top heavy central office personnel. As I recall from the budget meetings they thought there was a lot of money hiding that could be used elsewhere,” one person wrote.

“The waste in our school system comes from the top! How many new assistant superintendents & deputy superintendents at really needed? We need more teachers & building support staff, not overpaid ‘superintendents’,” another wrote.

Page administrator Jessica Garnett later told NancyOnNorwalk, “I think it’s unfair that the BoE didn’t have their own meeting where all these questions could be asked. This study to ‘root out waste’ on the side of the BoE came up with a whole lot of nothing IMO, at least at first glance. I think until we can digest the full report and ask the questions there is still a lot of unknowns.”

At least three Board of Education members sat in on the Council meeting, although it wasn’t advertised as a joint session. Mayor Harry Rilling gave them the opportunity to ask questions. Board of Education Vice Chairwoman Diana Carpio said she’d only gotten a copy three hours earlier. BoE member Sheri McCready Brown called the report “very informative” and “very clear.”

Board of Education Chairman Colin Hosten was not visible during the Zoom session and did not speak. He did not answer a Wednesday email giving him the opportunity to respond to the study and asking if the Board of Education would consider Evergreen’s recommendations.

On Thursday, the Board announced an online town hall scheduled for 6 p.m. March 31, where Evergreen will make a presentation on the efficiency study. Board members will ask questions and the meeting will conclude with a community Q&A.

A few thoughts on above:
The Administrative chart above includes New Rochelle and White Plains. That’s a bogus inclusion and should be tossed out. Westchester Taxes are sky high and those school systems are an unfair comparison with Connecticut Schools. Do we want to have New York City educators and Westchester Taxes? I don’t think so.If you discount those cities, Norwalk Admin staff looks even more overstaffed.

Savings on Teachers/Para Professionals — Does anyone really think Mary Yordon from Redding will go along with any changes without getting a piece of the savings for her peeps? (Remember the great Health Insurance bonus scam from just a few years ago? — How’d that turn out for Norwalk Tax Payers?) Savings will not be as great as noted above. In fact, I would bet there’s a better chance of just adding staff and actually increasing costs and lowering efficiency. REMEMBER, this study is theoretical NOT real world. Anyone can write a theoretical study on this stuff if they have a HS diploma. Assuming they can actually read at a 12th grade level (Which leaves out a large swath of our current graduates by the way)

This study does point out one thing I fully agree with — The BOE is NOT a crisp well managed team. We are paying a lot of money to a lot of Theoreticians who lobby to keep themselves relevant. But that’s ok — The good news is they are forcing our teachers into workshops so they can better understand pronouns and coddling techniques. It’s nice to know that our kids can’t read or balance a check book, but they can feel free to be to be sexual chameleons.

A statement from the report that doesn’t reflect what really happened: “in July 2020, the administration began updating and aligning positions, organization charts and job duties. Central Office roles were restructured to better align with the strategic operating plan.” The real story is that the superintendent began restructuring jobs, telling the people who had held them that if they wanted to continue working for NPS, they were free to apply for the jobs they had held for years. More than a few NPS people were replaced with people the superintendent wanted, often from NYC.

A statement that begs an important question is: “Interviews indicate substantial turnover in critical areas, such as Human Resources. . ..” The question is, “Why did the HR department turn over all but one of its staff? Of the dozen people who worked there before the current HR director took over, only ONE remains, unless that person has also left by now. A couple of people that the HR director hired since she took over have also resigned. With the likely exceptions of the HR director and her good friend, Dr. Estrella, I know of no one who thinks that the HR department has effective leadership or that it is anywhere nearly as effective as it was before the HR director took over.

I agree with John O’Neill’s comments, especially about the puzzling inclusion of two New York districts. These districts may be geographically close, but there are no relevant comparisons to be made with Norwalk and other CT districts. I also want to know why the consultants used staffing data from a couple of years ago, a year before Dr. Estrella’s arrival. She has created additional and costly administrative and other positions since then.

The biggest savings we can have is to end our sanctuary city policies.

I made a mistake moving my kids to Norwalk schools. The higher ups don’t care.

Ok “S” – I have to ask – exactly who are you referring to when you say “higher-ups?”

1. Teachers? I doubt it.
2. Administrators? Possibly – we have several that think Fiefdom – not education. One was just re-assigned.
3. Unions? No doubt – both the NFT and NASA are – by definition – there for the adults. Their primary function is to get the best possible compensation and prevent any kind of discipline or reprimand for any behavior – short of felonies. They have been wildly successful.
4. The BOE? You do realize the individuals on the board were hand-picked by the DTC, for what I believe is their adherence to whatever policy the political party deems priority. The results show their complete, abject lack of competency. The chairman is widely recognized as the mayors hand pick.
5. The mayor? He is the de-facto head of the BOE. He controls every aspect of the city right now. He takes credit when convenient – and avoids accountability at all costs. The schools have gotten progressively worse, every year he has been in power. Coincidence?
6. Our state representatives? How have they improved the schools? ECS – we just sent letters and people to Hartford begging to review an unfair formula. The only two “100%-dedicated” Norwalk rep’s – Simms & Perone – did not send anything. Thanks.
7. Our state senator, Bob Duff? He’s very concerned about his trophy project – willing to spend the time to make a pure propaganda video for something he thinks will be good for him politically. He doesn’t care that it will crush Norwalk financially. He say’s “he’s tried” with the ECS formula – but funny – it’s worse now than what it was when he started – 17 years ago.

Oh, I forgot. The biggest culprits of all. The Voters. All those parents who were so virtuous, that they voted purely by political party affiliation. They – more than any one person – did this. So, all the 30 something parents in town who have names from 80’s boy-bands and supermodels, take a bow.