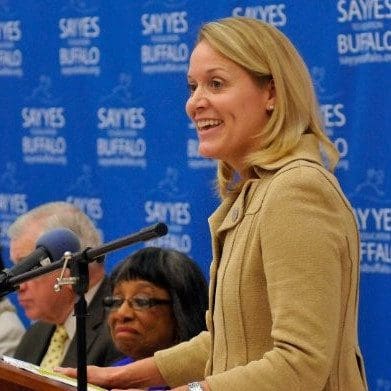 Connecticut’s education partnership with hedge fund billionaire Ray Dalio has been over for months, but state officials will apparently remain entangled in a legal mess for some time to come.

The former CEO of the disbanded Partnership for Connecticut recently notified Gov. Ned Lamont and four top legislative leaders, that she intends to sue for breach of contract and character defamation that was based on a “flotilla of lies.”

Mary Anne Schmitt Carey, of Greenwich, also sent written notice to Dalio’s wife, Barbara, other partnership members, and also to her former employer, Say Yes to Education. She charged that employees and benefactors of the nonprofit, which focuses on improving inner city education, conspired with the partnership to smear her reputation.

“The concerted effort to run her out of The Partnership based on a flotilla of lies has damaged Ms. Carey-Schmitt’s reputation,”  her counsel, Manhattan attorney Aaron M. Zeisler, wrote in a Sept. 4 letter obtained by the CT Mirror. “Put simply, the ramifications of your wrongdoing along with that of Say Yes and The Partnership will hang over Ms. Schmitt-Carey like a cloud for the many years left in her career.”

The partnership, which was slated to invest a minimum of $200 million over five years in Connecticut’s low-performing school districts — half provided by the Dalios and half by the state — dissolved on June 5, about one year after its creation.

Schmitt-Carey, a former CEO of Say Yes to Education with three decades of experience in education and nonprofit work, was hired to lead the partnership on March 23.

But just six weeks later, on May 4, she was confronted by Barbara Dalio, partnership oversight board chairman Erik Clemons, and a Dalio Foundation staffer, during a phone call and asked to resign. This occurred days before state officials involved with the partnership had been informed of any problems.

Schmitt-Carey has alleged she was “ambushed” during that May 4 call with a series of false and defamatory allegations.

And in the Sept. 4 letter, Zeisler adds that his firm’s investigation found “clear and unmistakable evidence” that the partnership based its decision on “false, disparaging and defamatory statements” made by employees, directors and benefactors of Say Yes to Education.

“Say Yes and certain of its personnel, directors, and benefactors engaged in a concerted scheme to harm Ms. Schmitt-Carey’s reputation and undermine her employment with The Partnership,” Zeisler wrote.

He did not specify what those statements were, and neither Schmitt-Carey nor partnership officials have offered specifics about the May 4 phone call.

An official with Say Yes to Education could not be reached for comment Friday.

Zeisler also charged in his letter that the partnership was in violation of contract and state employment law when it placed Schmitt-Carey on administrative leave on May 7 and when partnership officials subsequently discussed this in public.

Schmitt-Carey’s notice also asserts that despite her vehement denials of unfounded allegations, “The Partnership made no independent investigation of these claims, in flagrant disregard of the board’s duties and governance protocols.”

Shortly after news broke about Schmitt-Carey being placed on administrative leave, the Dalios withdrew from the partnership, though they said they still intend to invest $100 million in Connecticut’s public schools.

Lamont announced the Dalios’ decision on May 19, saying he was disappointed the news media reported on a sensitive personnel matter.

Max Reiss, the governor’s communications director, declined to comment, citing the potential for pending litigation. A representative for the Dalio Foundation did not immediately respond to a request for comment Friday.

Before its dissolution, the partnership’s brief tenure had been marked by concerns about transparency and whether the state had relinquished too much control over its public school system to a wealthy, privileged few.

State officials had exempted the partnership, at the Dalios’ insistence, from state disclosure and ethics rules, which meant  significant portions of the oversight board’s meetings were held behind closed doors.

When the partnership board voted to dissolve on June 5, it voted to legally indemnify state officials, their appointees and other members of the board.