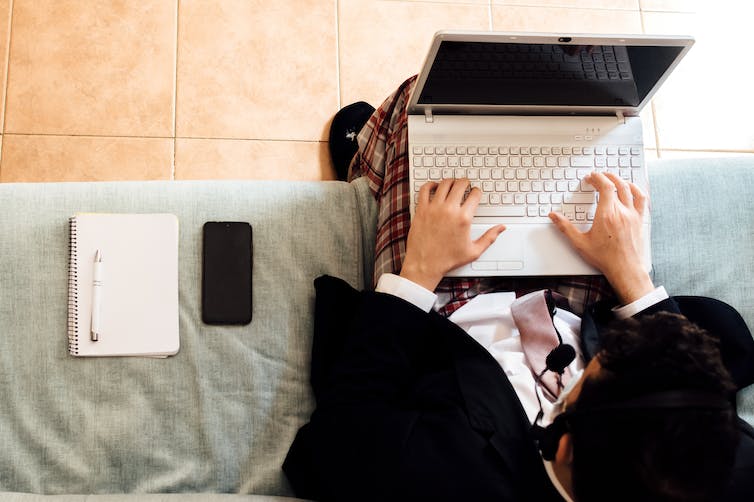 Some workers aren’t that excited about a return to the office. (Antonio Sanchez Albacete/EyeEm via Getty Images)

As vaccinations and relaxed health guidelines make returning to the office a reality for more companies, there seems to be a disconnect between managers and their workers over remote work.

A good example of this is a recent op-ed written by the CEO of a Washington, D.C., magazine that suggested workers could lose benefits like health care if they insist on continuing to work remotely as the COVID-19 pandemic recedes. The staff reacted by refusing to publish for a day.

While the CEO later apologized, she isn’t alone in appearing to bungle the transition back to the office after over a year in which tens of millions of employees were forced to work from home. A recent survey of full-time corporate or government employees found that two-thirds say their employers either have not communicated a post-pandemic office strategy or have only vaguely done so.

As workforce scholars, we are interested in teasing out how workers are dealing with this situation. Our recent research found that this failure to communicate clearly is hurting morale, culture and retention.

We first began investigating workers’ pandemic experiences in July 2020 as shelter-in-place orders shuttered offices and remote work was widespread. At the time, we wanted to know how workers were using their newfound freedom to potentially work virtually from anywhere.

We analyzed a dataset that a business and technology newsletter attained from surveying its 585,000 active readers. It asked them whether they planned to relocate during the next six months and to share their story about why and where from and to.

After a review, we had just under 3,000 responses, including 1,361 people who were planning to relocate or had recently done so. We systematically coded these responses to understand their motives and, based on distances moved, the degree of ongoing remote-work policy they would likely need.

We found that a segment of these employees would require a full remote-work arrangement based on the distance moved from their office, and another portion would face a longer commute. Woven throughout this was the explicit or implicit expectation of some degree of ongoing remote work among many of the workers who moved during the pandemic.

In other words, many of these workers were moving on the assumption – or promise – that they’d be able to keep working remotely at least some of the time after the pandemic ended. Or they seemed willing to quit if their employer didn’t oblige.

We wanted to see how these expectations were being met as the pandemic started to wind down in March 2021. So we searched online communities in Reddit to see what workers were saying. One forum proved particularly useful. A member asked, “Has your employer made remote work permanent yet or is it still in the air?” and went on to share his own experience. This post generated 101 responses with a good amount of detail on what their respective individual companies were doing.

While this qualitative data is only a small sample that is not necessarily representative of the U.S. population at large, these posts allowed us to delve into a richer understanding of how workers feel, which a simple stat can’t provide.

We found a disconnect between workers and management that starts with but goes beyond the issue of the remote-work policy itself. Broadly speaking, we found three recurring themes in these anonymous posts.

Others have also found that people are taking advantage of pandemic-related remote work to relocate to a city at a distance large enough that it would require partial or full-time remote work after people return to the office.

A recent survey by consulting firm PwC found that almost a quarter of workers were considering or planning to move more than 50 miles from one of their employer’s main offices. The survey also found 12% have already made such a move during the pandemic without getting a new job.

Our early findings suggested some workers would quit their current job rather than give up their new location if required by their employer, and we saw this actually start to occur in March.

One worker planned a move from Phoenix to Tulsa with her fiancé to get a bigger place with cheaper rent after her company went remote. She later had to leave her job for the move, even though “they told me they would allow me to work from home, then said never mind about it.”

Another worker indicated the promise to work remotely was only implicit, but he still had his hopes up when leaders “gassed us up for months saying we’d likely be able to keep working from home and come in occasionally” and then changed their minds and demanded employees return to the office once vaccinated.

Another constant refrain we read in the worker comments was disappointment in their company’s remote-work policy – or lack thereof.

Whether workers said they were staying remote for now, returning to the office or still unsure, we found that nearly a quarter of the people in our sample said their leaders were not giving them meaningful explanations of what was driving the policy. Even worse, the explanations sometimes felt confusing or insulting.

One worker complained that the manager “wanted butts in seats because we couldn’t be trusted to [work from home] even though we’d been doing it since last March,” adding: “I’m giving my notice on Monday.”

Another, whose company issued a two-week timeline for all to return to the office, griped: “Our leadership felt people weren’t as productive at home. While as a company we’ve hit most of our goals for the year. … Makes no sense.”

After a long period of office shutterings, it stands to reason workers would need time to readjust to office life, a point expressed in recent survey results. Employers that quickly flip the switch in calling workers back and do so with poor clarifying rationale risk appearing tone-deaf.

It suggests a lack of trust in productivity at a time when many workers report putting in more effort than ever and being strained by the increased digital intensity of their job – that is, the growing number of online meetings and chats.

And even when companies said they wouldn’t require a return to the office, workers still faulted them for their motives, which many employees described as financially motivated.

“We are going hybrid,” one worker wrote. “I personally don’t think the company is doing it for us. … I think they realized how efficient and how much money they are saving.”

Only a small minority of workers in our sample said their company asked for input on what employees actually want from a future remote work policy. Given that leaders are rightly concerned about company culture, we believe they are missing a key opportunity to engage with workers on the issue and show their policy rationales aren’t only about dollars and cents.

Management gurus such as Peter Drucker and other scholars have found that corporate culture is very important to binding together workers in an organization, especially in times of stress.

A company’s culture is essentially its values and beliefs shared among its members. That’s harder to foster when everyone is working remotely.

But many of the forum posts we reviewed suggested that employer efforts to do that during the pandemic by orchestrating team outings and other get-togethers were actually pushing workers away, and that this type of “culture building” was not welcome.

One worker’s company “had everyone come into the office for an outdoor luncheon a week ago,” according to a post, adding: “Idiots.”

Surveys have found that what workers want most from management, on the issue of corporate culture, are more remote-work resources, updated policies on flexibility and more communication from leadership.

As another worker put it, “I can tell you, most people really don’t give 2 flips about ‘company culture’ and think it’s BS.”

I can tell you that soooo many people who work from home often abuse company time. I don’t blame management for wanting physical accountability from employees. Also, the corporate disconnect for those businesses that cultivate that culture, remote working doesn’t cut it.

But, on the other hand, if you want to reduce overhead, have employees hooked up to monitors online to verify their presence “in office” remotely.