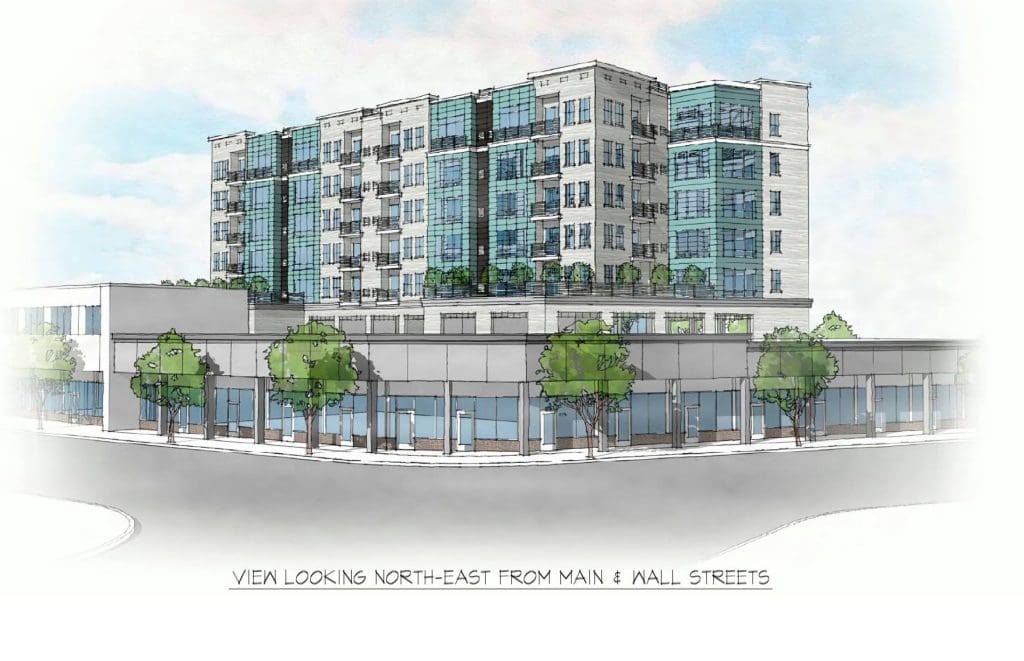 A 2017 rendering of the plan for Head of the Harbor North. The project cannot be built without tax abatements, Michael DiScala said.

NORWALK, Conn. — The Common Council is set to vote on the proposed expansion of Norwalk’s Enterprise Zone into the West Avenue-Wall Street area, as on Tuesday the Ordinance Committee voted 6-1-0 to move it forward.

Council member Tom Livingston (D-District E) took care to make it clear that “POKO,” aka Wall Street Place, would not be eligible to tax abatements under the new ordinance if passed. Developments that are already in the pipeline may benefit, including Pinnacle at Waypointe.

And Head of the Harbor North may benefit. Assistant Corporation Counsel Brian Candela read a letter from M.F. DiScala saying that the project cannot be built without tax relief.

State statute defines an Enterprise Zone as “an area in which local tax incentives are offered to encourage business investment and jobs for residents in disadvantaged census tracts,” Norwalk Chief of Economic and Community Development Jessica Casey explained in May.

The zone allows property owners to receive a level of tax abatement on improvements to their properties over a period of seven years. While the Council can adjust the specifics, Casey gave an example of a project receiving an 100 percent tax abatement for the first year, moving up to just 10 percent by the seventh year.

South Norwalk has seen properties being redeveloped and people moving into the neighborhood and supporting businesses, because of its Enterprise Zone, she said. And the City gets more tax revenue than it was getting from the properties before the redevelopments, even with the tax breaks.

The drafted ordinance would add Census Tract 437 to the existing Enterprise Zone. There’s a sunset clause – on July 1, 2030, the Zone would expire. The Council would get status reports at least every three years, and can ask for an update at any time, Candela said.

“Even if the reports come back that this is an absolute disaster, that there’s nothing can be done until the 11th year,” Council member Thomas Keegan (R-District D) said.

That’s incorrect, Candela said. The Council could repeal the ordinance at any time, by going through the same process it’s using to create it. The sunset provision is there only to make sure the ordinance isn’t forgotten or overlooked by a future Council.

Keegan voted against the proposal.

If the Council approves the ordinance it will need to be cleared by the Department of Economic and Community Development (DECD). Livingston worked with Candela to draft new language specifying that it won’t become law until DECD signs off on it, and only then, after 10 days have passed will projects be eligible for a tax abatement.

Council member David Heuvelman (D-District A) asked if the Garden Cinemas would be eligible for a tax break.

The Garden Cinemas is being incorporated into “POKO;” it will be demolished and a four-story building with apartments and a parking garage built in its place. Director of Business Development & Tourism Sabrina Church explained that it would not be getting tax abatements as it’s governed by the same Land Disposition Agreement (LDA) as the well-established Wall Street Place construction across the street, commonly called The Tyvek Temple.

The mixed-use project Norwalk Hospital is planning at the old YMCA property is probably not eligible because the hospital has a different tax structure and, “I don’t believe they would be able to take advantage of it,” she said.

She couldn’t think of any other existing projects that would be eligible, she said.

DiScala’s Head of the Harbor North has generated controversy as it involves building over a municipal parking lot. More than 2,000 people signed a petition in 2018 opposing the project.

The city would retain the public’s rights to park on the lot, in the draft agreement that was presented in 2017. Construction would take 16 to 18 months, during which time people would be forced to seek alternative parking areas, Jason Enters of M.F. DiScala said at the time.

DiScala is now interested in moving ahead because the City has advanced POKO, Michael DiScala said in the email read by Candela.

“Unfortunately, we cannot afford to build if the current tax structure in Norwalk is assessed against this property. Without tax relief, we cannot build the project,” DiScala said, according to Candela. “We’re here by asking the City to approve the proposed tax incentives for the area to benefit our project as well as other potential development in the area.”

A developer begs for tax relief to make building 80 more apartments more profitable. residents and existing small businesses lose access to parking for 1.5 years. Peaches and Fat Cat shut doors. A community petition with 2,090 signatures is deemed useless. But Parkopedia says there are 92 current spots so the community will gain one (public?) parking spot in a few years

Generally, enterpirse zones are the biggest scam going. Expect nothing less from Norwalk.

Regarding Nancy’s comment that 2,000 people petitioned to stop DiScala’s Head of the Harbor North project due to the temporary loss of parking – – 14,000 people signed a petition to protest the permanent loss of the cinema, and its still coming down…so build, build, build. This is a wonderful urban neighborhood, long awaiting its revival.

Question: If the Enterprise zone includes the Head of the Harbor North property, wouldn’t that make that property more valuable and hence more appealing to other developers who may have backed away in the past?
As I read today’s national headlines today’s Great American was really a no-brainer. Mayor Fiorello La Guardia may have been physically short, but no one was bigger in character and integrity. The current mayor in New York is a clown who is doing irreparable damage to the tristate area. It is my hope the next Mayor will have Laguardia’s toughness and character. An interesting side note, La Guardia was not 100% Italian. His Mother was Jewish and from the great Coen family of Trieste..Possibly related to the Great baseball Coen family from Norwalk…

Just curious, why are all the new buildings all over town look as though they all came from the same page in the same architecture design book. Come on people a bit of design diversity would be nice.

DiScala is a local developer as I recall from past article he is. Its refreshing to see a Norwalk based company and family invest their time and money into the area. They do quality work as well that doesnt take a “poko lifespan”. Something needs to happen to Wall St. DiScala seems to be the only person getting things done. So let them be I say

The key element missing in the Wall/Main downtown area for the past three + decades is people, both residents and business.

It is encouraging to see the City making efforts to attract new residents and businesses to the Wall/Main area.

On a side note, I never understood the backlash against the Head of the Harbor North project as that parking issue could be easily rectified by using Freese Park as a temporary parking lot. After all wasn’t Freese Park going to be “renovated” anyway? And if its done by the government it sure to be a loooong, sloooooow, expensive process. Plus the parking lot was going to remain public. DiScala was taking the air rights (the area above the lot), not the lot.

So by allowing the Main Street merchants and businesses to park at Freese Park during construction our Downtown ends up with a new Freese Park (require DiScala to renovate the park once construction is done, nothing like a market rate building to get things done quickly), much improved public parking, and most importantly 80 new market rate apartments with 80+ new people supporting our local merchants and restaurants.

It would have been done by now.

I know some of you will be up in arms about the school enrollment and school costs. But in truth, that argument was lost when Norwalk essentially embraced a sanctuary City policy four or five years ago. We may as well make the best with what we have.

Thank you Harold for the link to the Bloomberg article. I don’t like the look of these buildings any better, but at least I understand how they came to be so omnipresent.

In all honesty, a voice from a New Yorker here, why so many of these generic looking cheap “luxurious” buildings here in Norwalk? The Smith St apartments (THE

worst I’ve seen by far behind the abandoned POKO building), the Avalon plazas, the Waypointe apartments (atleast the Chase building has some character to it), the apartments along Day St and Water St, the building on Bates Ct near the SONO station, the dead roger square area, and now this? Norwalk is becoming too GENERIC and STALE. The people of Norwalk don’t see it, but the people who visit this city most definitely does for sure. Norwalk has no character and no jit to it no more. The SONO mall is a literal joke, and you guessed it, it’s probably the same case with all of these new construction projects around Norwalk. Look at your roads populated with potholes and unwalkable sidewalks instead. The random open plots along busy corridors. WAKE UP NORWALK.

As a recent transplant back to Norwalk from San Diego, I agree with Anthony. Please, Norwalk, fix the roads and sidewalks. And hire a different developer to design new the projects.

Sadly Annie, the common council has given the new “POkO” developer the go ahead.