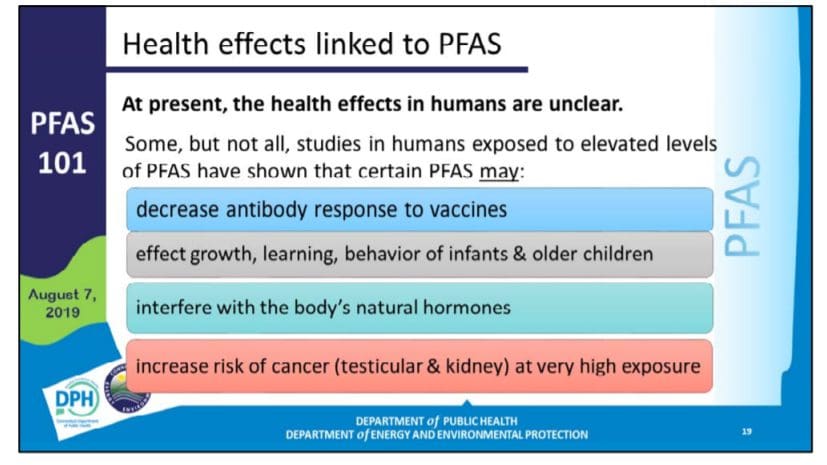 A slide from a 2019 Connecticut Department of Public Health PowerPoint presentation.

In 2019, the First Taxing District revealed that tests found PFAs – perfluoroalkyl and polyfluoroalkyl substances – in two of its five wells, but when the water was blended the result was lower than the then-current EPA advisory PFA level. The wells were shut down.

Tuesday’s EPA advisory slashed the PFA standard. First Taxing District officials did not reply to a Thursday email seeking a response to the EPA’s announcement and clarification on its import.

“The new advisories cut the safe level of chemical PFOA by more than 17,000 times what the agency had previously said was protective of public health, to now just four ‘parts per quadrillion.’ The safe level of a sister chemical, PFOS, was reduced by a factor of 3,500,” Yahoo News reports.

“PFOA (sometimes known as ‘C8’) and PFOS are the two PFAS that have been the most extensively produced and therefore are the most studied of these chemicals,” the Collins Law Firm states.

“The updated advisory levels, which are based on new science and consider lifetime exposure, indicate that some negative health effects may occur with concentrations of PFOA or PFOS in water that are near zero and below EPA’s ability to detect at this time. The lower the level of PFOA and PFOS, the lower the risk to public health,” EPA states.

The First Taxing District initially tested for PFAs in December 2018, after the State Department of Public Health requested that districts with more than 10,000 customers test the water, a State official said three years ago.

“We are in communications with the First District Water and South Norwalk Electric Water to monitor the situation and will have more updates in the near future,” Norwalk Director of Communications Michelle Woods Matthews said Friday.

“I believed then as I do now believe that any in our drinking water is a risk for residents, as some may be more affected than others by varying amounts in the water,” he wrote. “In doing homework on this, there are filters that can be installed in homes to help minimize the levels.”

He explained, “Activated charcoal filters appeared to help the most.  These are not hard to find. But when I was researching this a while back, Culligan, at that time advertised they could remove it.  I don’t know if the still can.  As you know, what a company advertises and what they can actually do can be two different things. I tried asking the water depts and they had no suggestions.”

EPA’s new advisories are “the latest action under President Biden’s action plan to deliver clean water and Administrator Regan’s PFAS Strategic Roadmap,” EPA states. “EPA also announced that it is inviting states and territories to apply for $1 billion – the first of $5 billion in Bipartisan Infrastructure Law grant funding – to address PFAS and other emerging contaminants in drinking water, specifically in small or disadvantaged communities.”

Wow, another nail in the coffin for trusting the federal government and its agencies. Over recent decades and presidential administrations, the EPA has been systematically gutted and taken over by the official narrative operatives. The official narrative being, “Do whatever will enhance profits without regard for human or environmental health.”

I am not quite as upset with the First Taxing District, the mayor, or local agencies and committees. Like PCBs that swam downstream in the Hudson River from industrial run-off, PFAS originate in the following products that many of us use:
– Synthetic food wrappers
– Sunscreen
– Fire-fighting foam
– And, YES, the almighty smart phones
– Even pizza delivery boxes, the cardboard coated with PFAS

PFAS can enter the drinking water supply from its commercial source: Industrial waste and spill-off, and by leaching into the ground water or rainwater run-off. When planes have emergency landings, PFAS foam is sprayed and where does it go after it’s all over the runway? The passengers are safe, but the earth (and our drinking water, soil, air) suffers.

Without making radical changes at the source (manufacturing) and demanding change by The People, government on the federal level is obviously ineffective/unwilling, leaving it to local governments to try and mop up what is too large to handle at this stage.