“I decided to come to Norwalk because I wanted to be part of a smaller community of learners and have an opportunity to work in a smaller city. I’ve heard great things about Norwalk, and its diversity and how invested the community has been to education. And that really ignited an interest in me wanting to be part of such a great community,” Estrella said in a Monday interview with NancyOnNorwalk.

Video of interview at end of story

Estrella, currently superintendent for Community School District Four in East Harlem, said her biggest challenge when she comes to Norwalk will be making sure she allocates the time necessary to get to know the community. She wants to speak to community members and elected officials to “a good sense of what Norwalk values and most importantly, what are the things that are working well and what are the things that the community wants to see continue to improve and strengthen as I continue my work there.”

On July 1, her first day, she’ll have “a deep conversation” with Norwalk Superintendent of Schools Steven Adamowski, who is retiring, and meet with the chiefs, Board members and union leaders to get that “deep sense” of the work that’s been done. 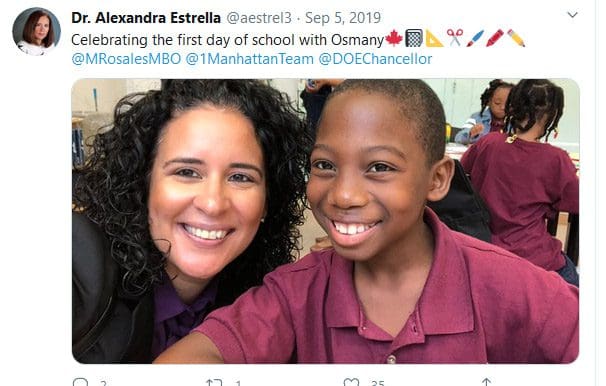 She will be Norwalk’s first female superintendent since Susan Marks resigned in July 2012 after leading for two years, and the first non-Caucasian since Manny Rivera exited in January 2015 after 1.5 years on the job.

Diana Ayala, Council member in New York City’s 8th District, honored Estrella in October with a proclamation that said Estrella has done stellar work as an educational leader who does not accept the status quo around scholar development and learning opportunities. Estrella has more than 20 years of education experience, starting as a science teacher in Washington Heights, and went on to found Esperanza Preparatory Academy, a dual-language middle school in East Harlem. Later Estrella acquired a multimillion-dollar grant from the New York Trust Fund to allow the district to increase state scores by 18 percent, according to Ayala. Graduation rates have increased and the achievement gap for multilingual learners has narrowed.

Estrella said New York City schools are set up with a Community Education Council, which is similar to a Board of Education in Connecticut, but a Chancellor appointed by the Mayor chooses superintendents and oversees their work. The Education Council is elected by parent associations.

Community School District Four is made up of 23 schools serving approximately 13,500 students in grades pre-K through 12. Compare that to Norwalk’s 20 schools and nearly 12,000 students.

Although Estrella hails from New York City as a first generation American, she and her family have lived in Westchester County for eight years, she said. Her daughter will be entering college in the fall and her twin boys will be high school freshmen in Norwalk Public Schools.

As an NPS employee, her children can attend school here without being residents.

She, and other members of her family, have come to Norwalk to shop, she said, mentioning Walmart and dinner in the restaurant in front of Home Goods. “I was able to speak to a lot of people there when I was sitting down and dining and it was a really nice experience.”

How has the pandemic affected her life?

While it’s challenging as the community is suffering much loss, it’s given educators an “opportunity to think outside of the box and to look at new and new ways of thinking about the work and how to embrace students and learning,” she said. There’s also been increased participation from the community as parents attend meetings via Zoom and she looks forward to using these tools to enhance what educators have been doing for the past several years.

There are also opportunities for family time so everyone can talk about what’s on their mind, she said.

“My husband lost his father in this pandemic, so that has been difficult for us as a family but having like the opportunity to just like have conversation has been really helpful,” Estrella said.

‘Not going to please everyone’ 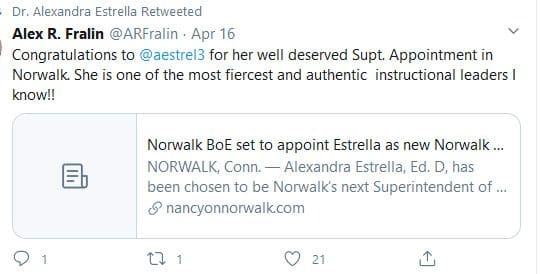 “I think like in any large system like New York City where you have over 1.1 million children and you’re serving in that capacity, you are bound to not please everyone. And you’re going to find people that are not going to say positive things, for whatever reason,” Estrella said.

The PTA president didn’t think about what he was doing and learned from the experience, she said.

She didn’t know there would be an issue with the house sale and she subsequently provided her principals with training so they wouldn’t make that mistake, she said.

“I take the experiences and learn from them, and allow other people to learn from what might have gone wrong so that we can continue to do better as a whole,” she said.

What’s she proud of? 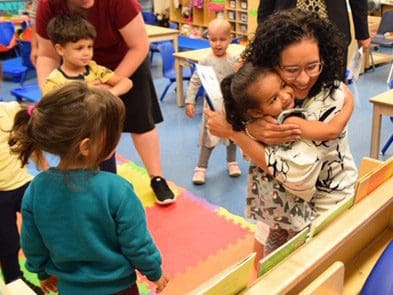 She’s very proud of being the first member of her family to graduate with a college degree. As a superintendent, she’s proud of the work she’s done serving students with special needs and enhancing the work around English Language Learners, ensuring that every child is served, “building community and bringing my school leaders teachers and community at large together to enhance the learning experience of children.”

The biggest thing she’ll miss about her old job is the people, “especially the children, a lot of them I know by name and we interface on a continuous basis,” she said. “…I’m going to make it a point in Norwalk to make sure that I’m constantly around children… still stay connected with those people that have done amazing work for me throughout the years.”

Great article! Dr. Estrella is a great choice! She focuses on children first. I’ve been fortunate to work with her for years! You will see her hard work and dedication in Norwalk school system!

Bravo, local news is so important especially in times like these

@Banks, thank you. We agree, and it’s always nice to get positive feedback.

To all our readers: if you agree that local news is critical, please show your support by becoming a “sustainer” – with a monthly tax-deductible donation. We are a nonprofit news organization; we rely on our readers to keep us afloat financially so we can keep delivering the local news you need. Any amount helps – and it’s tax-deductible!

We can’t do this without you!