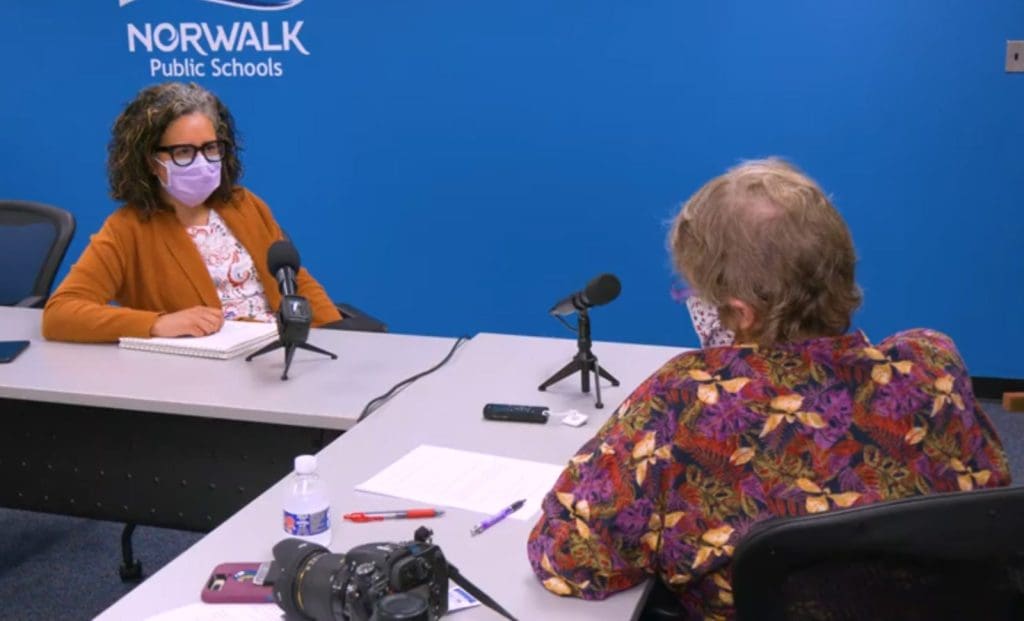 NORWALK, Conn. — Norwalk Superintendent of Schools Alexandra Estrella, just two months into her new job, sat down with NancyOnNorwalk to discuss starting work here during a pandemic and the Board of Education’s strategic approach to defining new goals for the future.

Estrella, former superintendent for Community School District Four in East Harlem, described herself as hands on, making it a priority to visit every school and have in-depth conversations with each principal in the weeks prior to the schools reopening, so she could get to know them. She also sought information about the district and advice on what she should continue doing or keep in mind as she transitions into her new role.

One of the biggest challenges but also the biggest assets has been the need to meet people virtually, she said. Ordinarily, a new superintendent would be out there engaging with everyone face-to-face, but, “I was able to have the opportunity to interface with many, many more people than I would have been able to in a setting in person conversations,” she explained. “Having Zoom and Teams as a platform to start engaging in dialogue with the community allowed me a bigger scope, a bigger opportunity” as she worked to learn Norwalk’s history and get feedback on what improvements are needed. 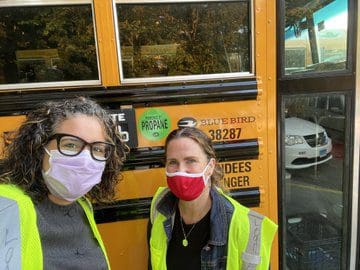 “I was in every single school for reopening because I wanted to get a sense of how people were feeling how the kids were feeling,” Norwalk Superintendent of Schools Alexandra Estrella said. (Norwalk Public Schools)

COVID-19 forced a reimagining of school reopening and now, as the district proceeds with a listening and learning tour as part of its look at educational equity, it has to “think through how to engage in these conversations and spaces that are adequately socially distanced, but also providing those individuals that want to participate with an option to do it via a digital platform,” she said.

The district will likely continue to use Zoom and similar platforms because they result in “more dialogue than we probably had in the past, in a quick expedited way that face to face might not necessarily allow,” she said. They allow for quick conversations and people don’t spend so much time in transit, getting to a meeting.

Estrella said the feedback she got from those outreach efforts indicate that the public is interested “more communication, more transparency,” and has a “desire to continue to move in the positive path of creating being the best city school system in Connecticut.”

To that end, the district is working toward drafting a new strategic operating plan, “hopefully at some point between January and February.” The listening and learning tour guided by Temple University Associate Professor Edward Fergus, Ph. D., as part of the equity initiative is part of that: “We are starting off by building the capacity and building a common language and understanding of what, what implicit bias is what does it mean? And how do we, as individuals contribute to the largest system around some of these challenges?”

Does she think there’s implicit bias in Norwalk Public Schools? Or racism?

“I mean, any institution has, has the potential of having systematic racism. And part of the part of what we’re doing is assessing where we are as an organization,” Estrella said. “…When you look at the historical data across the country, there is obviously significant concern of how Black children are over disciplined and how certain populations of students, Black and Hispanic, are not achieving at the level that we want them to. And we need to assess how our system might be contributing to those outcomes and ensure that we set up a deeper understanding around people’s mindset and structures that might be contributing to that so that we can ensure that as we designed our new strategic operating plan, we set up so forth to ensure that all students are successful within our system.”

Estrella said she prefers the term “multilingual learner” to “English Language Learner” because it recognizes the value of the child’s native tongue and doesn’t emphasize the idea of the dominant culture as represented by the English language. Norwalk has headed in the right direction with its multilingual learner programs and “will continue to strengthen those practices given the large number of multilingual learners in the district.”

NPS is putting out a RFP (request for proposals) for a review of the Special Education department because “this is a great opportunity for us to assess what needs to continue to be done so that we can continue to move that department in a good direction,” she said.

“Utilizing all of these components will give us a sense of what has been achieved and what needs to continue to be worked on, based on the previous strategic operating plan,” Estrella said. “Things change over time, right? So we’ve had an influx of multilingual learners into the district, and that has implications in the work that we do. When this original strategic operating plan was done, that there was growth happening, but not at the level that it happened.”

Does she think the school district has been too focused on test results?

“I couldn’t answer that because I haven’t been here long enough to assess that there has been the pattern,” she said. But, “I believe that we want to focus on looking at the whole child and look at what success looks like. Looking at assessments, but looking beyond assessments as well, because children are more than numbers.”

That would involve evaluating “qualitative measures.”

Estrella said she is proudest of putting children first, in every aspect of her professional life. “Norwalk is really thinking about what are the best things that we need to do as an organization to ensure that students are successful and do well. In my prior district that was always at the forefront of my work, and I’m looking forward for it to continue to be at the forefront of what I do here,” she said.

There’s no such thing as a typical day in her role as Norwalk superintendent, she said.

“There is an array of things that would encompass my day, usually ending pretty late, around seven and continuing even after I get home, following up with conversations with either Board members, or different personnel that will want to touch base on different matters throughout the day,” she said.

Finally, “I’m really happy to be here,” she said. “I really enjoying being part of such an amazing community. I’m looking forward to embarking in great work with great people.”