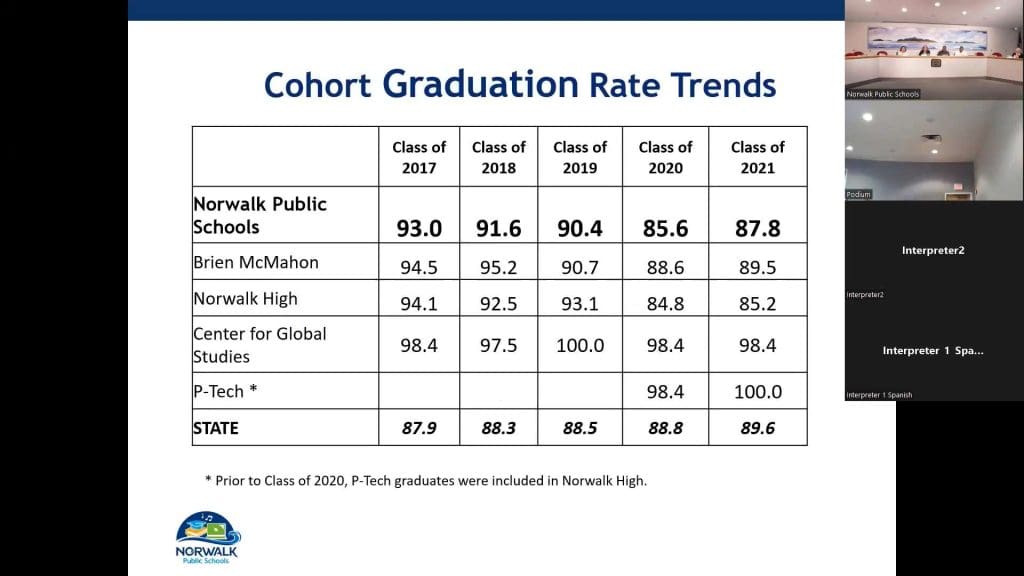 Norwalk Public Schools graduation rates are presented at the June 21 Board of Education meeting.

Estrella and her team have linked the declining graduation rate to the school district’s demographics.

“As our number of non-English speaking students increased in the district, our graduation rate started to decline,” Estrella said June 14. “But that is a direct correlation with the limitation in course options the students have, not necessarily their ability to engage in the content.”

Multilingual learners (MLL), or English language learners (ELL), “are immensely talented,” said Aida Walqui, a senior research scientist at WestEd, a consultant to the district. “… Research into multilingualism shows very clearly that multilingualism, for example, confers (upon) the speaker cognitive flexibility, increased creativity, the ability to think about our thinking processes.”

The problem is “they have the course-taking patterns that do not prepare them for graduation, when the talent is there,” Walqui said. 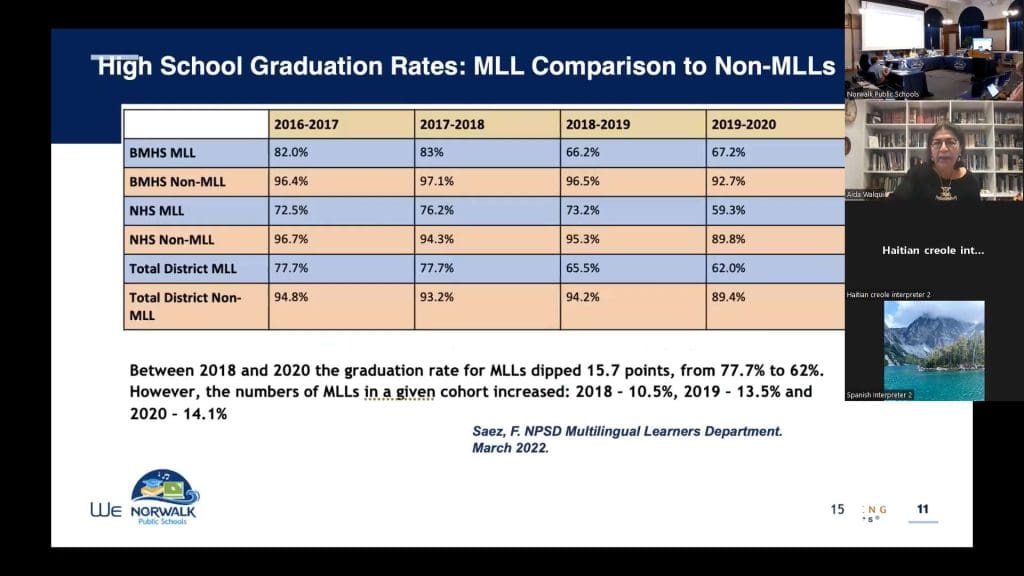 Estrella identified the issue in February.

“If you look at our district data right now, the graduation rates for our multilingual learners is approximately hovering around 68%, which is concerning and in order for us to continue to uplift our graduation rate, we are going to have to carefully look at what’s happening with our multilingual learners as well as our students that are receiving specialized services,” Estrella said Feb. 2.

She said, “I think just like MLLs, looking at Black and brown children, looking at students receiving specialized services throughout the organization, I have found that the curriculum has not been rigorous enough, and that students could be challenged in ways that they are not.”

Multilingual learners constitute 18% of the district’s student population and in 2021-22, the growth rate went up, with 219 new MLLs at Norwalk High School, or 7% of the student body, Walqui said June 14. While English-speaking students had a graduation rate of 89.4% in 2019-20, the “sad situation is that only 62% of the multilingual learners in Norwalk high schools are ready to graduate.”

Again, that’s attributed to the programming.

“I think that one of the challenges that happened across the district was that there was an influx of students and people needed to expeditiously put something in place to support the students,” Estrella said. “And now we have the time to really think about how to further expand and extend that work.”

Historically, MLL students were segregated, which restricted their course choices, she explained. Additionally, the students felt their language development was inhibited by not having access to non-MLL peers, who could model the language. Now, they’re able to acquire additional hours of language services and given access to abundant course options.

About 38 MLL students were not on track to graduate this year “because of the course limitations that were in place prior” and the administration “reconfigured and realigned their programs,” changing their status so they could graduate by August, Estrella said.

“One of the things that we predict is that by next year, we will have a significant shift in the graduation rate based on these modifications that have been made in terms of the program design across Norwalk High School and Brien McMahon,” she said. 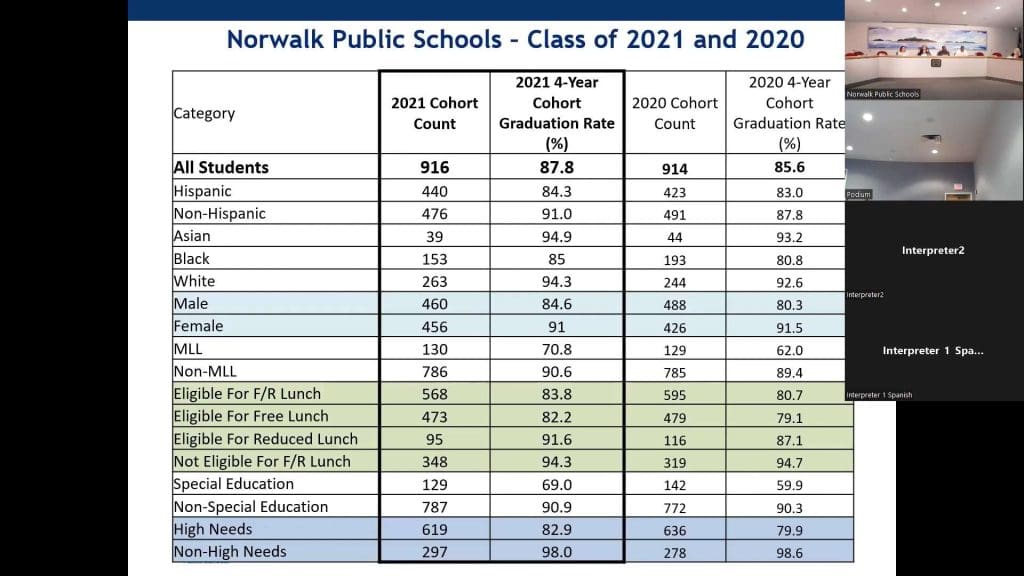 Norwalk Public Schools graduation rates are presented at the June 21 Board of Education meeting.

On June 21, Estrella noted that despite the challenges brought by the pandemic, the district’s educators “have been able to really move the results” in terms of graduation rates.

One of the reasons the graduation rates had been hovering in the 80% range was “particular subgroups not achieving at the rate that we want them to and expect them to.”

“This is significant because it demonstrates how our efforts, particularly in looking at disproportionality across the district, (are) starting to have a positive impact in the achievement of our students,” Estrella said. “Am I happy for these successes? Absolutely. Am I satisfied? Absolutely not. We still have a lot of work to do. We can’t rest until we reach 100%.”

In addition to programming modifications for multilingual learners, Estrella said the Twilight Program, which offers after-hours schooling to students who aren’t making it to classes because their families need them or they have to work, has helped put students on the path to graduation. 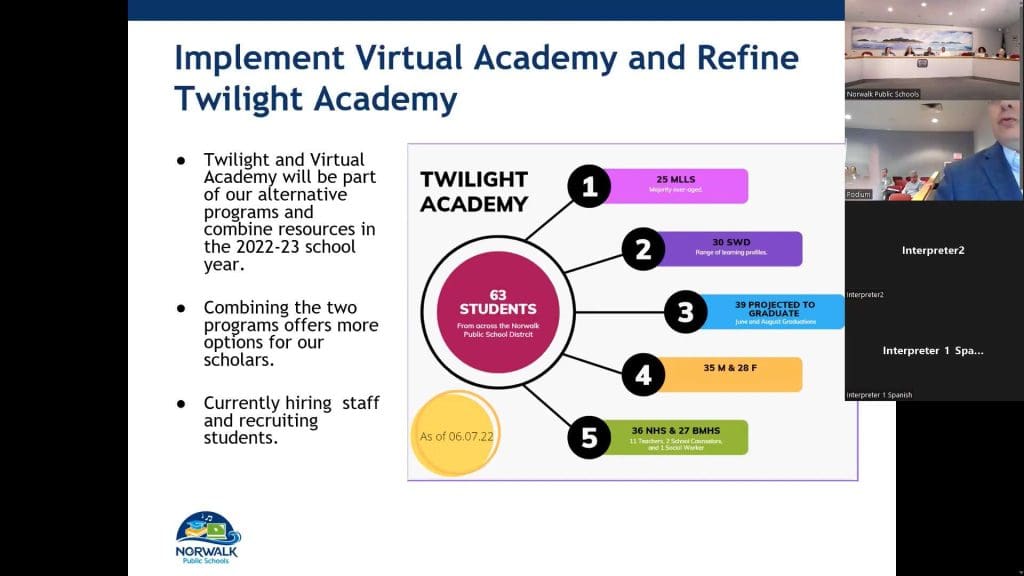 Assistant Superintendent of Digital Learning and Innovation Ralph Valenzisi speaks at the June 21 Board of Education meeting.

Ralph Valenzisi, Assistant Superintendent of Digital Learning and Innovation, said 63 students were enrolled this year and about 39 of them are graduating.

NPS has been working toward a virtual academy and, “In reality,” they  “should be combined,” he said.

Valensizi first spoke of a virtual high school academy a year ago, after Gov. Ned Lamont signed Senate Bill 2, requiring the State Commissioner of Education to set up standards, not regulations, for virtual learning and allowing School Boards to authorize virtual learning in grades 9-12.

Students would opt into the virtual academy. It won’t be remote learning as practiced during the pandemic but would feature “criteria, policies and procedures, as there are within another school,” he said.

Last month, Estrella said that while significant strides have been made this year, there is still “a lot of work to do, particularly within the different subgroups in the district. In particular, we are looking to increase the graduation rate for multilingual learners and students with disabilities.”

Quantity over quality is not a strategy we should pay someone over $300,000 a year for. A high school education should mean something other than attendance.

AMAZING. SEVEN YERS OF POSTGRAD SCIENTIFIC STUDY ARE INSUFFICIENT TO UNDERSTAND OUR NPS MUMBO JUMBO!
“…our graduation rates started to decline. But that is a direct correlation with the limitation in course options the students have, not necessarily with their ability to engage in the content.” I read that to say the students had the ability to take the courses needed to graduate but the NPS did not provide those courses. Whose report card does that go on? Clearly Dr. Estrella’s and cohorts.
When will we stop changing Superintendents and organizational setups and long range ed plans and go back to teaching the basics that achieved our 93% grad rates in the good old days. You can tell me the difference is the non-English population but not that they are capable and Norwalk is not providing them with the courses needed to graduate even though they are capable of success in these courses.

Reading between the lines — The reason graduation rates are higher is because the bar to graduate has been lowered. In my opinion Estrella and Co. must think we’re stupid. I think if you asked teachers about this the vast majority would agree with me.
The political apparatus of the Norwalk Publick School System is hard at work trying to “spin” their story. Shouldn’t they spend that time and those resources educating our children.
On another topic: Don’t forget July 24th in National Spitting Day — Looking for state Senators to judges the contest being held next Sunday.

Neither our Supt nor BOE has yet posted any public plans to improve student achievement in meeting CT Dept of Education graduation standards. In our surrounding towns almost all students meet CT Edu Dept graduation standards and go on to secure 4 year college degrees. But in Norwalk they do neither. (ref.CT Edu Dept’s website).

Monies don’t seem to be the problem. Reportedly salaries in Norwalk and surrounding towns are similar. Our Supt reportedly is highest paid in CT even though Norwalk is just an average per capita community for CT. Despite repeated public calls for improvement our BOE has not publicly responded on its inability to secure student achievement that meets CT standards. Nor has our City Hall or Common Council responded.

Most of our public school students are minorities with many new citiziens (US Census),
City Dems claim a special interest in helping our minority residents. Why not pay much more attention to our public schools. A good place to start is with the qualifications and abilities of our BOE members. Our surrounding towns seek out BOE members with strong business and professional backgrounds. Norwalk does not.

Norwalk has had 4 Supts in the past decade. Reportedly the last Supt wss not chosen using a recognized National Prof Search firm. Recently the BOE gave the Supt a salary raise and contract extension. Yet recent surveys show a disproportionate number of teachers are leaving Norwalks public school system.

City leaders need pay much more attention to our public schools. They’re our kids !
And deserve a proper public school education. Why is this so difficult in Norwalk ? Half the parents in Norwalk have 4 yr college degrees (US Census). So we have expectations for much higher public school outcomes.

Of course the graduation rates are up… not too hard when you lower the standards.

This is the spin doctor at her best. Do you know that participate in high school sports in Norwalk you only need to carry 4 d’s and a f! That is disgusting. Most districts require a C+ average. In band there are no required minimums. I would love to see a breakdown of attendance records as well.

With the number of undocumented individuals and students coming to this country, let’s see how that unfolds regardless of who the superintendent is. Good news though for Direct TV.

Don’t you love this info everyone?

If the graduation rates are so great how is it a graduate missed over 120 days of school and still graduated this year. The truth is kids that are failing classes or are absent a lot are aloud to be pushed through to the next level to show high rates of graduation. This is a big joke everybody. We need a new board and superintendent who care about the students and teachers, not themselves with their hidden agendas and big salaries. Also how many Norwalk graduates are really graduating from college? Someone needs to look into this as well. From what I’ve been told a lot of students start out at norwalk community college, but never finish getting a degree. They either can’t afford to go on the work is too hard,or they simply are not prepared enough.Very few norwalk high school students get a college degree and this is the sad fact. But norwalk touts being number 1 in test scores and graduation rates,yeh right. Enough is enough.

this is just random noise in the data… Probably not even significant. Just a political move..