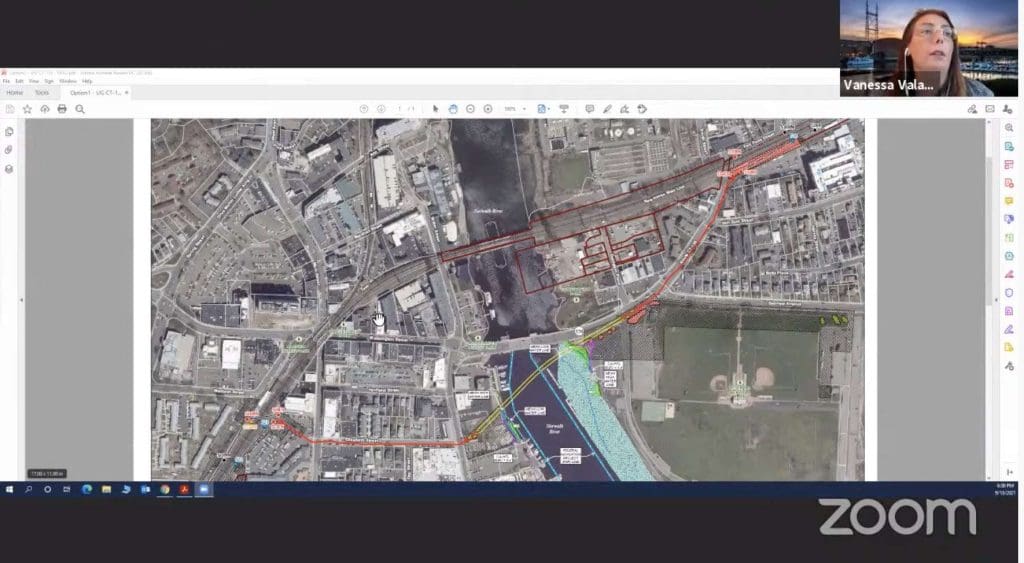 NORWALK, Conn. — As a part of the Walk Bridge project, Eversource has been planning to underground its transmission lines that cross the Norwalk River via the Walk Bridge. On Monday, members of the Norwalk Public Works Committee and Planning Commission unanimously advanced the latest version of the plans to move the lines underground.

The transmission lines will start above ground at the Norwalk Police Station, before moving underground to cross South Main Street and then continue under Elizabeth Street, cross under Water Street and then under the water, following a path close to Route 136, according to Vanessa Valadares, principal engineer for the city. They’ come back above ground along the train tracks at the Fort Point intersection.

The path is more north than their last plan, in an effort to avoid the Veteran’s Park visitor’s docks, something that was a major concern of the Harbor Management Commission.

“Eversource was able to move the horizontal directional drill to go far to the north of the visitor’s dock, so they will really be in no proximity to where the pilings are,” Laoise King, the Mayor’s chief of staff, said.

Valadares said that she believes these new plans will fit most of everyone’s needs.

The two existing 115-kV electrical transmission lines that are attached to the current Walk Bridge have to be removed before the Connecticut Department of Transportation can replace the bridge, according to a city memo. This prompted the plans for underground wiring.

“DOT told Eversource that they need to move their transmission that today are over the bridge, that they should be relocated,” Valadares said, stating that these discussions began in 2016. In 2018, the Common Council approved a plan to move the lines under the river, she said, to allow for them to go to the Army Corps of Engineers for approval.

What’s in the New Plans

The Public Works Committee advanced to the Common Council an “agreement for the use of municipal property, temporary work area agreement, (and a) side letter agreement” with Eversource, while referring this item to the Planning Commission. The Planning Commission, which was also in attendance to review the plans, approved the temporary easement agreement as in line with the city’s Plan of Conservation and Development. The need for easements is why the plans were in front of the committees, Valadares said.

The agreement allows Eversource the right to “install, repair, replace, modify, maintain, and operate its ducts, conduits, manholes, and other underground structures … under certain areas of land located in the city,” which are located within and adjacent to Veteran’s Park.

Valadares said that all the drilling will not take place in the parks and the transmission lines will be north of the Docks.

It also allows Eversource the same right to operate and maintain its above ground facilities at the Norwalk Police Department.

Eversource also is responsible for dealing with any hazardous materials it encounters during the work and will also be responsible for using “clean” backfill, such as natural soils or rocks, if needed.

The temporary agreements allow Eversource room around these two locations to conduct construction work to move and underground the wires, as well as staging areas in Veteran’s Park and the police station.

On Elizabeth Street, Eversource will be responsible for working with South Norwalk Electric and Water (SNEW) to replace a water main that runs under the street, repave the street and add sidewalks that have been affected, as well as installing vintage streetlamps.

At Veteran’s Park, Eversource will be responsible for restoring areas that have been damaged, along with realigning the entrance to Veteran’s Park with Goldstein Place. The company will also contribute $25,000 to engineering and permitting costs to potentially expand the Visitors Dock at the park.

The agreement also calls for Eversource and the city to continue to “work in close collaboration throughout all phases of the project.”

Valadares noted that there have been “a lot of delays,” with this project, from both Connecticut DOT and Eversource, but the city has been “continually talking to Eversource” to come up with the best route to meet the interests of the city.

She noted that previous versions of the plans brought the transmission lines “a little bit south” and more under the Visitor’s Docks at Veteran’s Park.

“One of the things we requested of Eversource was to try and get out of Vets Park as much as possible,” she said.

The company moved its lines north and the horizontal drilling needed to underground the transmission lines will be along Route 136, not in the park, she said.

“For more than a year, we’ve reached out to the utility company requesting their presence at a Commission meeting to inform us of the status of their planning efforts,” Pinto said.

Pinto said that they either “received no response or said they weren’t ready to present.” He asked “for a fair chance to review and make comments on them before Council takes action.”

“It appears that process you are following tonight may be flawed,” Pinto said.

Pinto, who spoke before the plans were presented publicly, said that one of the major issues the Harbor Commission had with the previous plans was that Eversource had previously planned to run them under the Visitor’s Docks at Veteran’s Park.

“Once those transmission lines go under the Visitor’s Docks, it’s a no-fly zone,” he said, stating that they could have impacts on present and future plans for the area.

However, Pinto said that if they were able to move them north, which is what the new plans detail, the Commission would feel better about that.

“If they went perhaps north of the Visitor’s dock area, we would certainly feel comfortable with that aspect of the planning,” he said.

Romano said Eversource “doing an end run like this is very troubling to us.”

“We have not seen the plan for the new route and we are the ones that need to vet it and have a degree of comfortability because we’re looking out for your interests as your Commission,” he said.

However, City officials pushed back, stating that they’ve been talking about these plans for more than five years and that they have tried to work with Eversource to address the concerns the Harbor Management Commission had.

“We’ve been talking about this project for going on five years now, and there have been a lot of discussions back and forth with the Harbor Commission,” King said. “We’re very well aware of what their concerns are, and we feel like the City has been advocating really strongly with Eversource to make sure that they are taking into account every single issue that the Harbor Commission has raised.”

She said that she believed the Commission would be “really pleased” at the new proposed plans. Not only does the new plan moves the lines north of the Visitor’s dock to avoid those concerns, it provides the commission with compensation to make “additional improvements.”

“I feel confident that the current plan addresses what the Harbor Commission was worried about,” she said.

“This has been going on for three, four years,” Fran DiMeglio, chair of the Planning Commission, said. “I don’t understand how we are here today calling it an end run.”

“When looking at those exceptions and what our regulations are, we’ve come to the opinion that this does not require a coastal site plan review,” he said.

Callahan said that this was the “first step” in the process as the Common Council and the Connecticut Siting Council, which had jurisdiction over power facilities, transmission lines, and hazardous waste facilities, will review this to determine if the route is acceptable. 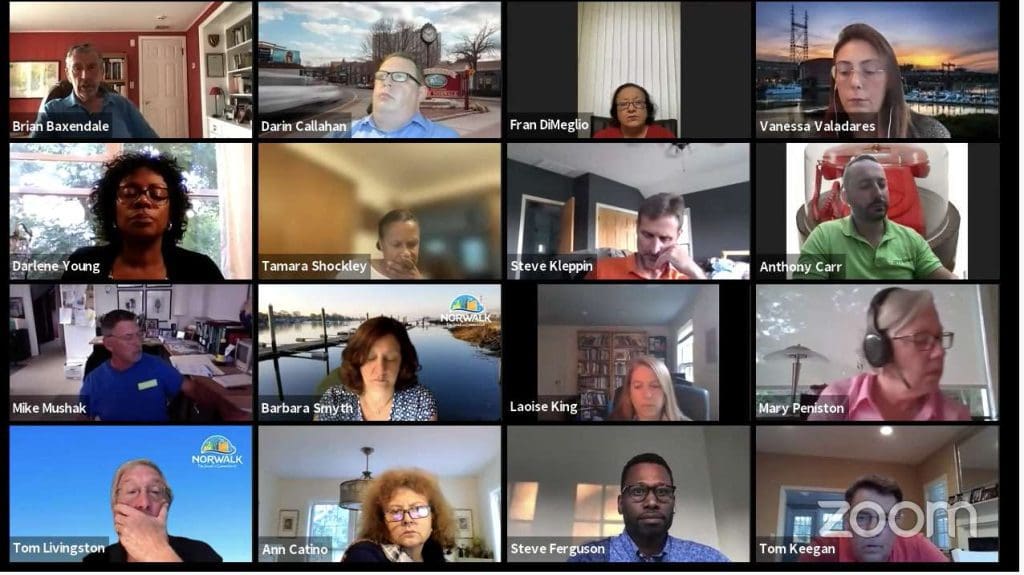 brilliant!! we should have started ungrounded utilites 40yrs ago!!! Daaaaaa!!

Well THAT’s gonna ruin my commute. Hope they figure out how to not keep people from entering the Coachworks parking lot.