Eversource Energy insists its response to the second-most destructive storm of the past decade was both swift — especially given challenges posed by the coronavirus pandemic — and within the parameters of the emergency response plan it must file with state utility regulators.

The utility also used its 115-page analysis — mandated by law within 30 days of a major storm event — to concede that while communications were flawed, the company was swamped with customer outreach that doubled its previous worst caseload.

“Notwithstanding the lack of adequate warning regarding the true extent of the destructive force of Storm Isaias, Eversource met the commitments made to Governor Lamont, the State of Connecticut and to customers,” utility officials wrote in their 30-day Event Report filed last week with the state Public Utility Regulatory Authority.

The sheer destruction not only exceeded that of any storm over the past decade with the exception of an October 2011 Nor’easter, but came with less notice than other events. On Thursday July 30, five days before Isaias struck Connecticut, the storm was still tracking well southeast of New England. And both the path and wind speeds remained unsettled through Sunday, Aug. 1. 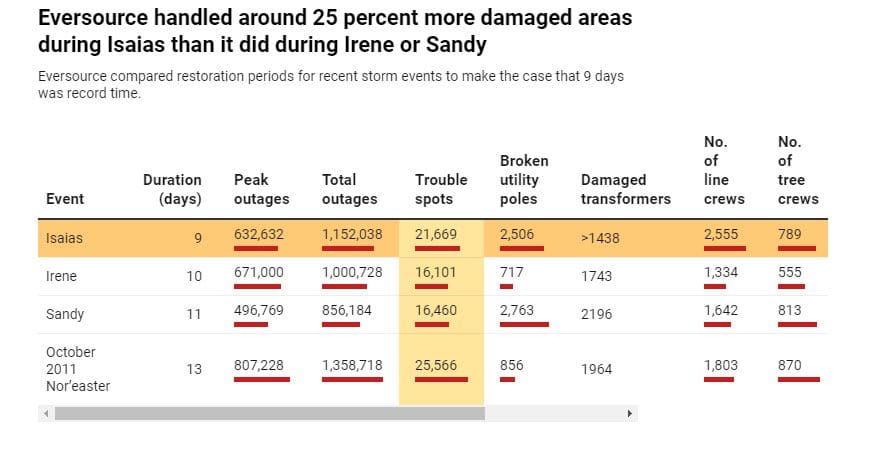 The utility initially shifted hundreds of crews from its operations in Massachusetts and New Hampshire into Connecticut, while also pursuing mutual aid from the Midwest, Canada and other locations.

But state officials aren’t buying it.

The utility had restored power to 90% of its customers by Sunday night, Aug. 9 — five days after the storm ended. And 99% of customers had power back by Tuesday night, Aug. 11. Some households, though, had to wait more than nine days.

Sen. Norm Needleman, D-Essex, co-chairman of the Energy and Technology Committee, noted those restoration times are eerily similar to those customers faced in 2011, both from the October Nor’easter as well as from Tropical Storm Irene, which had hit in August.

A state panel formed in the wake of those events concluded electric utilities were responding far too slowly.

“I don’t think they [utilities] have changed that much in 10 years.” Needleman said.

The legislature is expected to consider a bill in special session this fall that would mandate utilities, in future instances of prolonged restorations, reimburse customers for a portion of the cost of spoiled food and medicine.

During an Energy and Technology Committee hearing on the storm response last week, the panel’s other co-chair, Rep. David Arconti Jr. D-Danbury, challenged Eversource officials to stop “sticking to your talking points” and empathize with households.

“At what number of consecutive hours” without power “is is appropriate for a utility to reimburse its constituents?” Arconti asked.

And Marissa Paslick Gillett, Connecticut’s PURA chairwoman, testified in favor of legislation that would empower her group to set utility rates not just on the costs of procuring power and building infrastructure, but also on the quality of service.

The Aug. 4 event was unique, they say, given that it’s the only major storm on record that occurred during a global pandemic. 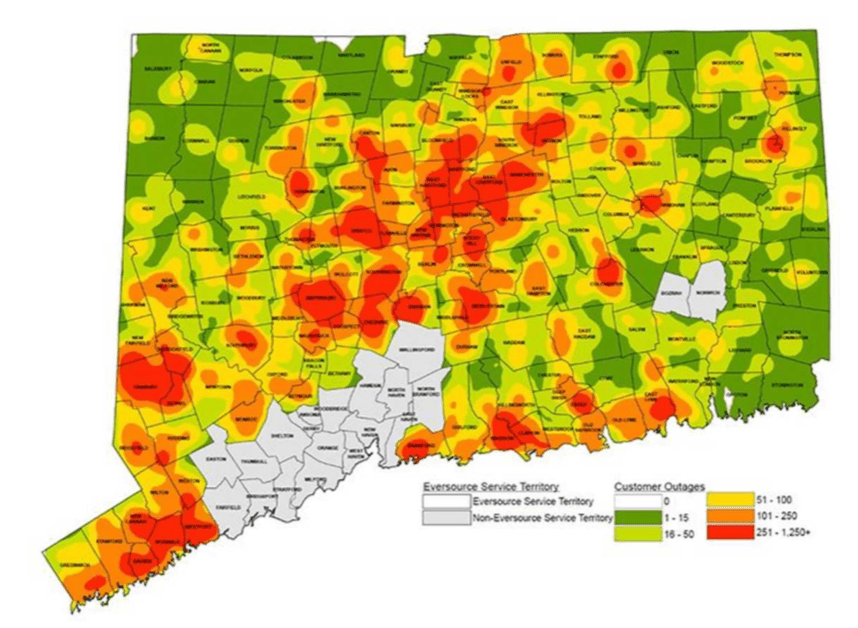 “The need to consistently and effectively apply COVID-19 protocols to protect the health of employees and customers permeated every aspect of Eversource’s response,” the company wrote in its 30-day report.

Supplies of masks and other personal protective gear had to be established at all area work centers.

Efforts to securing lodging for more than 6,000 employees and contractors became more complicated. About 40,000 beds were used over 10 days and 107,000 meals were procured.

Power restoration efforts involve massive coordination not only between work crews but also the technicians and other staff operating the electric grid. And Eversource still had to maintain social distancing in all areas, including “sterile environments” in its control rooms that limited access and employed medical screening at the start of each shift.

Many Eversource personnel who were under work-from-home status during the pandemic returned to offices, but only after additional deep cleaning.

The coronavirus also constrained where Eversource could turn for help outside of the region.

The storm had battered states farther south along the Atlantic Coast, which meant they couldn’t spare crews for Connecticut.

“Normally, Eversource seeks mutual aid crews from the southern and midwestern United States,” officials wrote in the report. “However, given the relatively high incidence of COVID in those regions compared to New England and Canada, the decision was made to secure as many available contractors as possible from the New England region.”

Eversource: Communication was flawed in the face of overwhelming customer outreach

Eversource officials did concede that the utility’s communications — both with customers and with state and municipal officials — was flawed and needs improvement.

But they also said the August storm brought unprecedented challenges in this area as well.

“The Eversource communication channels experienced noticeable capacity constraints,” that included “intermittent ‘time outs’ and ‘fast busy’ signals to occur on the mobile channels and calls into the call center.”

In other words, at many times, particularly during early stages of the restoration effort, customers couldn’t even access an automated Eversource system to report an outage of check to see if a restoration update was available. 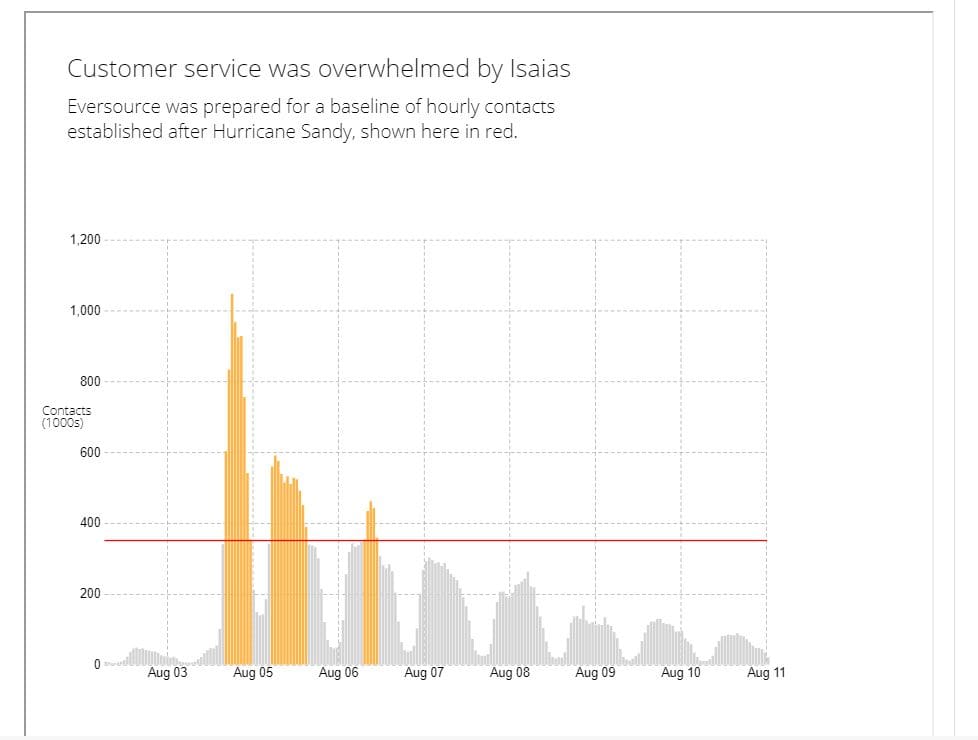 Source: Eversource. Customers engaged with the company via Eversource.com, the company’s outage map, mobile applications, calls and texts. The baseline established after Sandy was tested by 20% to 420,000. (Kasturi Pananjady)

To plan communications efforts for severe weather events, Eversource developed a model based on customer outreach from Superstorm Sandy, a 2012 storm that knocked out power for 600,000 households and businesses— and then increased it by 20%.

But the customer outreach from Isaias was double that of Sandy, the report states, involving more than 3 million customer requests for information as more households began making multiple requests for updates from different digital channels, such as a smart phone and a laptop computer.

During the first day of the August storm, those customers fortunate enough to avoid the quick busy signal that was followed by a disconnected call, waited an average of 19 minutes to speak to a customer service representative, the report states.

“The slowdown experienced by customers was understandably frustrating for them as they sought to report their outage,” the report states, and Eversource officials conceded repeatedly during last week’s hearing that communications must improve.

Our elected officials asked the Eversource CEO James Judge to resign and he didn’t. How about giving James’ stock awards to those hit hardest by the storm. What a lousy company to brag about it’s performance only to leave thousands stranded in yet another predictable outage. Eversource management is pathetic and James Judge should go!!!

Trees on private property that are not properly pruned and bring down wires, that owner or owners get to foot the bill on recovery.

I’ll bet if that is the case, there sure would be less damage by trees to wires.

Why should we pay in increased fees because owners do not maintain trees close to power lines?

One reason the reach out to Eversource was through the roof was that their website had literally no or wrong information on it for a whole week. We never had a restoration time listed until it came on six days later.

Maybe the oversight board of 3 six figured salaried members should consist of people with industry experience instead of the 2 politicians and 1 bureaucrat we have in there now. The investigations into Eversource should begin and end with a pocket mirror for King Ned and team.

Eversource pulling all excuses. And using the COVID card. Pathetic.