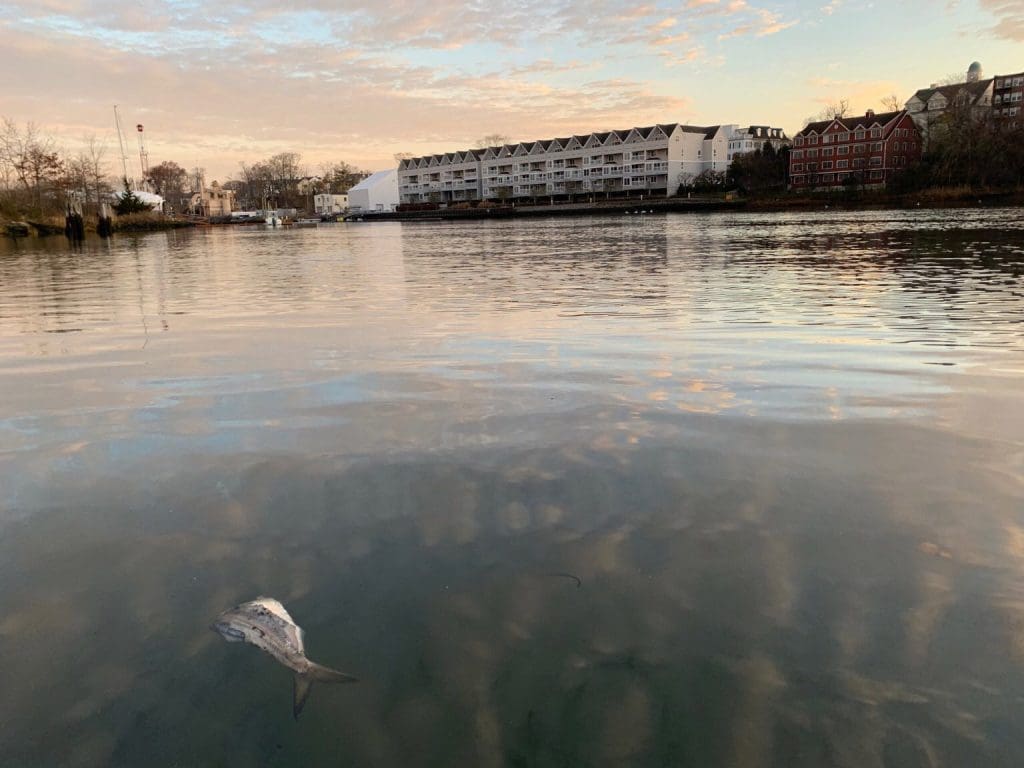 NORWALK, Conn. — Norwalk’s harbor keepers are pushing back on a recent “report card” giving the inner harbor an “F,” while preparing to push for equipment to monitor water quality 24/7.

Save the Sound, an environmental nonprofit, released its 2020 Long Island Sound Report Card last month. It included data for bays “along the margin of the Sound” for the first time and flunked Norwalk’s inner harbor, the worst bay rating in Connecticut.

Now, Norwalk’s Harbor Management Commission is seeking about $70,000 to to install new buoys that would take and relay measurements directly to onshore computers. Commissioners, along with Mayor’s Water Quality Committee Chairman Joe Schnierlein, are blasting the Save the Sound report card as using dated, limited information that they contend indicates a lack of understanding of how Norwalk’s harbor works.

“The thing that makes the harbor unique is that probably two-thirds of our harbor is mud flat,” Schnierlein said. “Because of that, it responds to temperature much more quickly than harbors with deeper water. And when it gets warm, the harbor waters get warm quick. So, oxygen levels plummet. That can dry fish out, or the fish that are here get stuck and they can’t get out.”

In a letter to Peter Linderoth, Save the Sound’s director of water quality, Schnierlein asked whether natural processes receive failing grades.

“Fjords in Norway are famous not only for monsters, but the fact that their depth and geology don’t allow for mixing and delivery of oxygen to their depths – yet they are natural – so they would fail {Save the Sound} tests for being what they were geologically! So, all of them would get an ‘F’ rating by Save the Sound,” he wrote.

Not only was the data used from 2019, but it was also only from the summer months, Schnierlein and others said at recent Norwalk meetings. Harbor Management Commissioner John Pinto asked what criteria was used to come up with letter grades: “If I if I were to take an exam, would I know what I’m being graded on? Is it the fact that we have a high nitrogen content?”

“We have a very high ammonia content, we have a low dissolved O2 (oxygen), we have changes in salinity that don’t go along with what the ideal body of water is. PH problems? You know, I don’t know what constitutes their criteria for goodness, let me put it that way,” he said.

Pinto said criteria should vary based on what you’re looking for in your waterway: is it a place for swimming? Or is shellfish the primary goal? Or drinking water?

Schnierlein’s letter touches on many of the points outlined in recent Harbor Management and Water Quality Committee meetings.

“I know from 33 years in a classroom that a report card is an extremely useful tool at gaging change and growth,” Schnierlein wrote to Save the Sound Director of Water Quality Peter Linderoth. “However, whoever reads the report card needs to know why they are getting the grade they are getting.  And, imagine back in the day when you were in college not getting a report card until a year after you had the class and you found out that there were issues with a professor you had recording your grades, made a mistake, and then disappeared on sabbatical and it caused you to get a lower grade and you could not prove it because he or she was gone and you needed that class to graduate with a higher grade than you got!”

The data was collected sporadically, Schnierlein said, citing conversations with EarthPlace and the Maritime Aquarium. 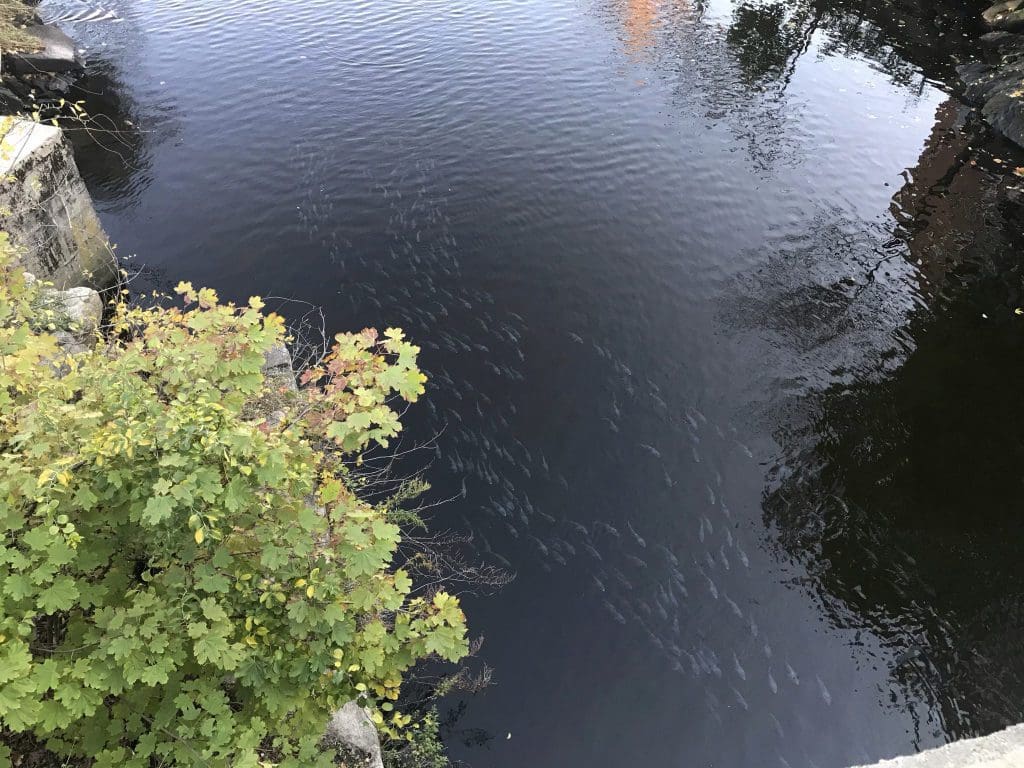 Menhaden, or bunker, swim in the Norwalk River just off Wall Street. “There has been a large school in the upper harbor for over a week now,” Mayor’s Water Quality Committee Chairman Joe Schnierlein said. “It has been a large enough school that on Monday, I counted 46 dead ones just along the seawall at Oyster Shell park. If too many of them are in a small area, they use up the oxygen, and can start to die off.”

“I believe Mr. Schneirlein’s comments in regard to 2 of the active monitoring groups are misleading. Both groups follow the procedures listed in the project quality assurance project plan which includes frequency of sampling among many other important elements,” Linderoth wrote Friday to NancyOnNorwalk.

“These grades are based on data collected as part of the Unified Water Study, a study fully funded by the EPA, administered by Save the Sound, and comprised of numerous water quality monitoring groups around the Sound,” Linderoth said last month in a statement.

“The Unified Water Study is designed to assess the overall environmental health of the bays that are monitored by the now 23 groups undertaking the on the water data collection,” Linderoth wrote Friday. “For clarification, Save the Sound administers the overall project in addition to participating as a water monitoring group, all groups follow an EPA-approved quality assurance project plan administered by Save the Sound, and seasonal data are aggregated and put through a rigorous quality assurance/quality control process prior to dissemination.”

Schnierlein has criticized measuring chlorophyll A, saying that while it’s a “good test,” it needs to be “taken in conjunction with plankton and algae samples.”

Bunker off Oyster Shell Park. When the fish are that dense in a small area, they die, he said. He attributes this to them using up the oxygen. “Could there be another reason for them dying – absolutely. But without funding to do the testing we will never know.”(Joe Schnierlein)

“Not all algae have the same amount of chlorophyl A,” he said in his letter. And, “the report has no Nitrogen data,” he wrote. “So, is the suspected nitrogen in the harbor coming from the treatment plant, or down stream from Wilton and New Canaan, or septic systems, or storm sewer lines or golf course runoff?”

“Black mayonnaise” was mentioned in the City meetings, a reference to muck at the bottom of the harbor.

“That’s what our shellfish thrive on,” Schnierlein said. “You know, and then you get the green layer of algae that lives right on top of that, utilizing that providing nutrients and oxygen for the shellfish. It’s a perfect combination.”

“It can be attributed to sewage outflows but unless you do DNA testing and prove it, stating that is unscientific with so many other sources to contribute to it. There are times especially during winter months when the harbor can have over 500 birds on it,” he wrote.

Schnierlein told Harbor Management Commissioners that “rumor has it” that his letter “has rattled cages from people in Save the Sound.”

“My original comments have not changed,” Linderoth wrote Friday. “Inner Norwalk Harbor has poor water quality. The State of Connecticut has listed the waterbody as impaired and unable to meet water quality criteria for aquatic life and habitat. Empirical data collected as part of the Unified Water Study support this listing among other information Connecticut Department of Energy and Environmental Protection needed to make this determination.  The City of Norwalk should take these issues seriously. I am seeing an effort to move away from the heart of this matter.”

Save the Sound will take Schnierlein up on his offer to discuss the issues in a City meeting, Linderoth said.

“We will be requesting this meeting be held with the full Norwalk Mayor’s Water Quality Committee and any other representatives the City of Norwalk feels appropriate for the discussion.  Save the Sound will be engaging in this conversation to discuss how this waterbody can be improved for the biota that inhabit it, Norwalk residents, and the entire Long Island Sound ecosystem,” Linderoth said. 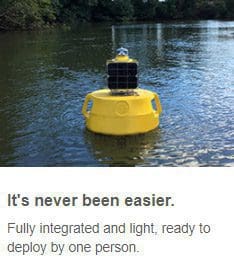 Detail from a flier advertising “All-In-One-Buoys.”

The buoys were the focus of much conversation at Wednesday’s Harbor Management meeting, where Pinto wondered how Norwalk would decide which criteria would be monitored.

“We should have one in the upper harbor,” and “probably in and around the vicinity of just south of the bridge work,” Schnierlein said. “If we could have a third one, it would be even better.”

You would get data on what’s coming into Norwalk and what’s leaving Norwalk and going out into the sound, he explained.

In an email, Schnierlein said an alternative would be to attach telemetric equipment to docks. The buoys in the channel would get better info, but “would be a problem for boating navigation as well as vandalism.”

The buoy idea was initially inspired by the Walk Bridge project but the report card hammered it home, he said, explaining:

“What the harbor needs is water quality monitoring for more than 3-4 months of the year and 24 hrs a day.  Having the data available immediately online would be ideal to detect night time plummets in dissolved oxygen or illegal night time dumping of sewage septic pumping trucks) or anything else.  Whether this is done via a buoy or attached to dock is one of the decisions that has to be made.  Also, what parameters are being measured has to be decided.  Minimally, dissolved oxygen, salinity, temperature, nitrogen, pH, turbidity, should be considered.

“And, a minimum of 2 testing stations need to be set up, one at the head of the harbor near Wall St., to test what is possibly coming into the harbor from upstream from possibly Wilton, Ridgefield or New Canaan.  A second station should be downstream-possibly the marine police dock.  Ideally one or more stations should be established off of Calf Pasture and another off of Greens ledge lighthouse.”

Chris Malik, a watershed manager with the Connecticut Department of Energy and Environmental Protection (DEEP), attended the Nov. 5 Water Quality meeting, at one point agreeing with Committee member Diane Lauricella that green infrastructure would help.

“I think to address the problem, you really have to look at it all over and understand it; the nitrogen that’s coming down from the upper watershed doesn’t get attenuated very much,” Malik said. Septic systems and fertilizers are absolutely sources and while “the wastewater plants have all been tightened up on their discharges,” Norwalk does have occasional overflows.

“The geography of the basin, the way it’s constricted …and the temperature is a deadly combination for the upper harbor,” he said. “But we’re moving in the right direction, putting attention on it. It’s unfortunate that it makes you guys look bad and it was Save the Sound’s report card, not DEEP, but at the same time, it’s an idea of where we need to focus attention. And I think that’ll help. Obviously, it hurts your publicity for your shellfish industry, whatever. But it could certainly help with getting attention for more potential fixes down the road.”