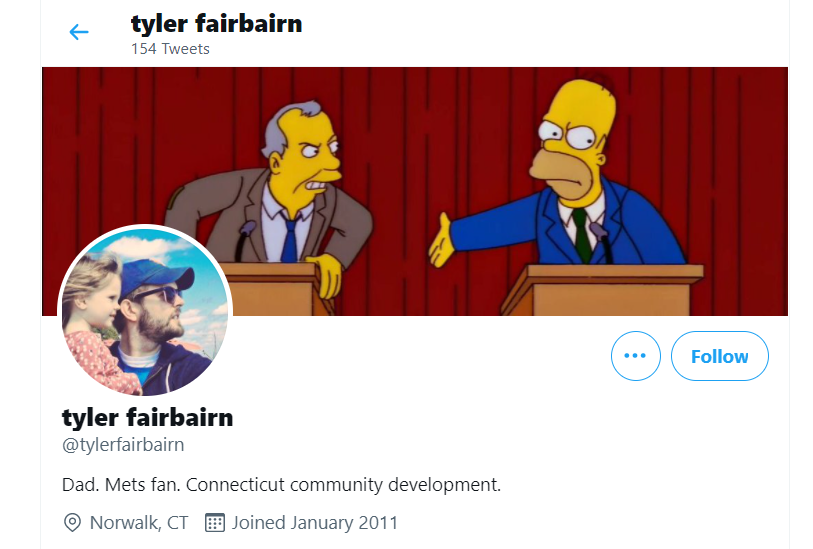 NORWALK, Conn. – Tyler Fairbairn, an East Norwalk parent and professional urban planner, has thrown his hat into the ring to represent District C on the Common Council.

Fairbairn is one of four Democrats vying for District C’s two Council seats, according to District C Democrat Beth Siegelbaum. Incumbent Council member John Kydes is seeking reelection and Jen McMurrer, a newcomer like Fairbairn, is seeking an endorsement. Also in the mix is Jennifer McAllister, Siegelbaum said.

McMurrer and Fairbairn have an uphill road to climb as Kydes and McAllister got the district committee’s endorsement on June 9, according to Siegelbaum.

The Democratic Town Committee will vote on endorsements July 26.

Kydes, who was first elected in 2013, has had George Theodoridis as his district partner for the last two two-year terms. Kydes recruited Theodoridis in 2019; Theodoridis has not, to NancyOnNorwalk’s knowledge, ever spoken up at a Council meeting, including on the Committee level. He’s not running for reelection, according to Norwalk Democratic Town Committee Chairwoman Eloisa Melendez.

Fairbairn and McMurrer have taken their case to the public at large via news announcements. McAllister has not. She is an Oak Hills Park Authority member, having been appointed in November, and a Justice of the Peace.

Her resume, included in November’s Council packet, shows that she was a fashion apparel wholesaler/retailer for Camuto Group from 2007 to 2019. McAllister is also listed as a vice president for financial planning and analysis from October 2017 to 2019, helping to prepare the company for sale. From 2007 to 2017, she was senior director for financial planning and analysis.

McMurrer, like Fairbairn, is an active parent. Fairbairn has spoken to City officials in the last two budget cycles, urging more funding for Norwalk Public Schools.

“I think it’s wonderful to have a sizable Rainy Day Fund. But, you know, I really truly believe that it’s penny wise and pound foolish to shortchange our kids,” he said in 2020. 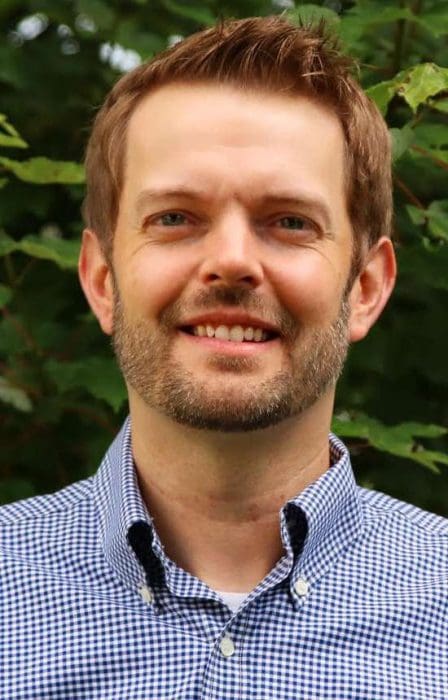 “Fairbairn has three young children, two of whom attend Naramake Elementary School where he has volunteered as a member of the School Governance Council (SGC) for several years, including as parent co-chair for the 2020-2021 school year.  He has coached Little League for the past three seasons and is currently serving as a Little League board member,” a Monday evening news release said.

He earned a Master of Science in urban planning from Columbia University in 2009. His Bachelor’s degree in history came from Drew University.

“Fairbairn’s background in urban planning has informed his work in municipal government for the last eleven years, where his responsibilities as a director/administrator of the federal Community Development Block Grant Program have focused on developing affordable housing and creating community-centered plans that align federal grant funding with nonprofit partners who serve a range of vulnerable, low-income residents.  Related to this work, he is currently the Vice President of the New England chapter of the National Community Development Association.

“‘I believe that my background in urban planning, community development and involvement in the schools through the SGC are well suited to the work that needs to be done over the coming years on the Common Council to ensure that the City is working for all stakeholders,’ Fairbairn said.

“The role of a representative on the Common Council is similar to that of a city planner, in that they are the voice for the needs and desires of the communities they serve,’ Fairbairn said.  ‘If elected, I would use my position to listen to what the residents of East Norwalk are excited, concerned and hopeful about, and advocate for those things at the Council level.’”

This article incorrectly states that there are three candidates vying for two Common Council seats. There are four: John Kydes, Jennifer McAllister, Jennifer McMurrer, and Tyler Fairbairn. All four attended and spoke at the District C Committee meeting on June 9. The committee voted to recommend Kydes and McAllister for endorsement by the DTC. Just the facts.

We are so lucky that Tyler has stepped forward to run for the Common Council. His background in urban planning is exactly what our city needs at this inflection point. Thank you to all the candidates who are willing to take time from work and family to serve the community and help us utilize our resources wisely.

Beth, thank you. I asked for that information several weeks ago and was told the candidates would become public at the DTC nominating meeting.

It is so great to see some fresh exciting candidates coming out of District C. Get rid of the dead weight. I don’t know Jen McCallister – but I know Kydes is a political opportunist who will use the next two years to stump for his doomed mayoral run and he has not impressed with his last few running mates – have to question McCallister if she is hitching her wagon to him. I’ll be backing Tyler and McMurrer.

Awesome let’s waste $20k on a primary for another rubber stamp for the mayor’s council.