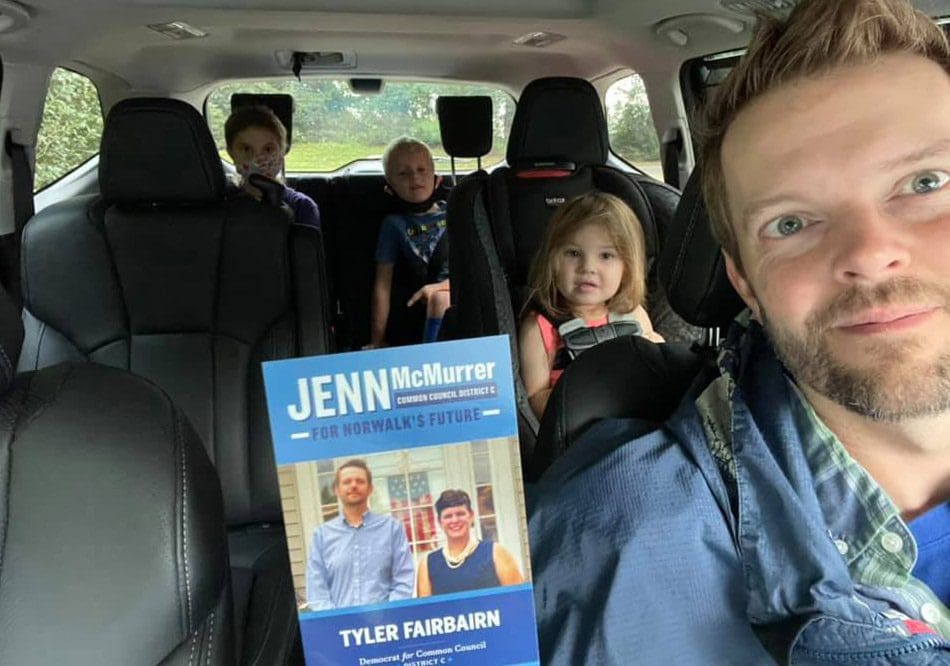 NORWALK, Conn. — There will be no Democratic runoff next week in District C. Tyler Fairbairn, who was seeking to be a Democratic candidate for Common Council, has dropped out.

This paves the way for John Kydes, a District C Council member since 2013, to be on the ballot with Jenn McMurrer as his running mate. They will face Republican candidate Read Auerbach and independent candidate Scott Goodwin.

Kydes leads the District C Democratic committee. His path to reelection seemed set but Fairbairn and McMurrer challenged the endorsements made by Democratic Town Committee in July, collecting enough signatures to force a primary.

McMurrer came out on top with 220 votes while Fairbairn and Kydes were tied at 188. Jennifer McAllister, Kydes’ choice for a running mate, had 175.

A runoff was scheduled for Tuesday.

“It is with a heavy heart that today I am withdrawing my name from consideration for a seat representing District C on the Common Council.  Since starting this journey nearly four months ago, I have had the opportunity to connect with so many friends and neighbors about their hopes and concerns for East Norwalk, and I am incredibly thankful for all of the support.

“While I went into this process with every intention of making it to the finish line in November, the time commitments of work, campaigning and family life have made apparent that now is not the right time for service on the Common Council.  I look forward to volunteering in the community in other ways, but for now it will not be in an elected office.

“Thank you to everyone who has supported me, put up a yard sign, knocked on doors, made calls, donated or offered encouragement along the way.  I am forever grateful to the Working Families Party of Connecticut for their assistance in my campaign, and to my own family for bearing with me through this process.

“Finally, while I will not be on the ballot myself in November, I will do everything I can to help elect Jenn McMurrer to the Common Council this fall.  Jenn is not only a dedicated school volunteer, devoted mom and master campaigner, but also my friend, and she would be such an asset to the City serving as a representative from District C.”

Fairbairn will not appear on either the Democrat or Working Families Party line of the ballot this fall, Town Clerk Rick McQuaid said.

“Both Tyler and I are incredibly disappointed that it came to this, however, I respect and understand his decision,” McMurrer wrote. “We have and always will be a team, even if we cannot be on the ballot together. I appreciate his support moving forward into November.”

“I wish him well in the future,” Mayor Harry Rilling wrote. “I’m sure he made a decision he was felt was in his best interest and in the best interest of his family. I do hope he remains active in the party it is really important to bring new people new energy and new ideas to the party.”

I am happy to see that Kydes will be on the ballot when I go vote in November. Not a big fan of how he was being attacked but didn’t look like Fairbairn was leading that charge.

Good Luck John! You and Read will make an EXCELLENT TEAM working and doing what’s right for our District!!!

So…let me say what this doesn’t…in my opinion, the Democrat Town Committee or some subset, urged on by Kydes, likely, absolutely bombarded this guy. They told him everything would turn to “poo” if he didn’t drop out…and then some angel, likely Bob or Harry, showed up and offered him some big prize if he dropped out. You will see him on a state or local committee within 6 months.

Just curious, who is going to pay for the ballots printed etc since he dropped out? Once again, the Norwalk taxpayers foot the bill. The City should be reimbursed for any and all expenses incurred due to the runoff. I fully support Mr. Kydes and he deserves to remain as Common Council and hopefully, Read Auerbach will win District C too. We need balance and truthfully, this current council is a little too far left for my taste. Having only one Republican on the Council is NOT a good thing for any Norwalk resident. Too much power to one party doesn’t work for the taxpayers especially when they are so progressive. With regard to a previous write up about Mr. Kydes, he has every right to get his supporters out to vote. Try driving around District C and see just how much support he does have and not just from the Greek people. Just saying.

Jenn, kydes willwork for your defeat, watch your back

If Kydes can’t handle talking to community taxpayers through NoN, then consider voters in the dark!

David: Again with the “Democrat Town Committee”? Wouldn’t you prefer to model a certain amount of civil discourse,and refer to it by its correct name the “Democratic Town Committee”. You can disagree with them all you want, but I think your criticisms would be more respected if you dropped the deliberately rude mis-naming of that body.

Greg: who is working against who? I read Nancy and I only see one side working against the other and it’s not Kydes. I’ve never seen these type of attacks in local Norwalk politics. I know that these people are new to Norwalk and that may be the way it was where they lived before but I dont like it. The more I follow this the more I believe all this is due to Kydes interest in being mayor and people at the top in City Hall are looking for a job security.

Where do these candidates stand on Joe Biden’s failed Presidency? The prior 4 years we heard all about Trumping local politics. Laughable but true