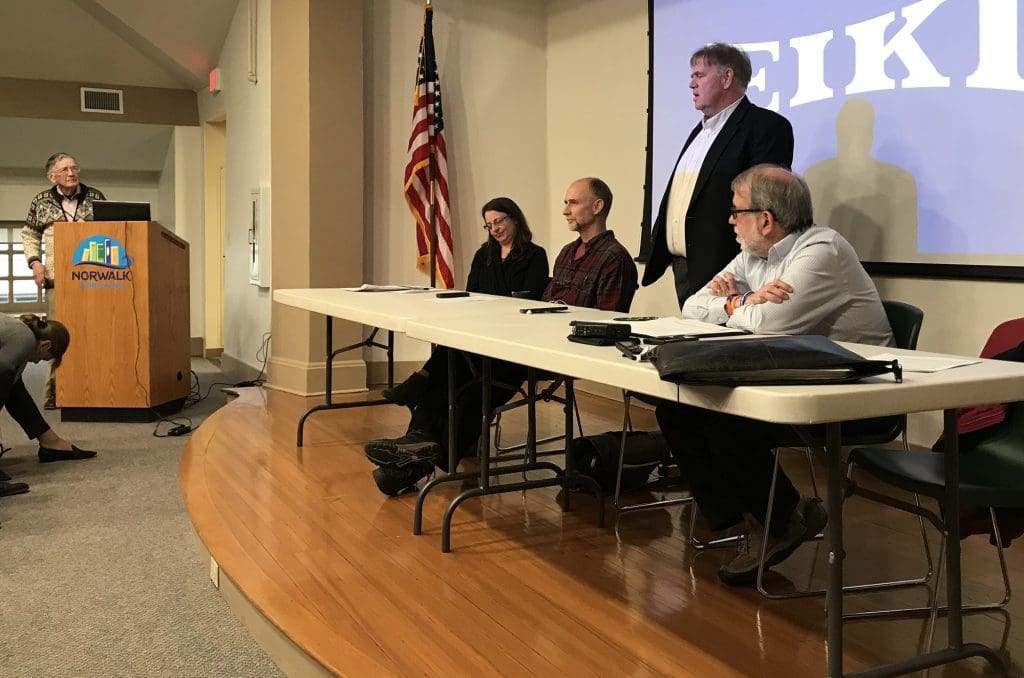 NORWALK, Conn. – Local votes are having statewide effects, according to a group of environmentalists.

“People’s grassroots organizing and resistance has resulted in (Fairfield County) being not just the much more blue portion of the state, but also more progressive with people willing to step online, so we’re trying to build off that,” Tom Swan, the executive director of the Connecticut Citizen Action Group, said at Friday’s Fairfield County Climate Change Forum in the South Norwalk branch library.

“There has never been a year that I felt we’ve been as much on the offense in terms of shaping energy policy as this year. And that’s why the next four weeks, and you contacting legislators …  is going to be so important that we build that momentum to continue,” Swan said.

Some of the updates on various bills in front of the Connecticut legislature came from John Humphries, Connecticut Roundtable on Climate and Jobs executive director, also offered, who talked of windmill energy and a Connecticut green economy effort. Panelists were put on the hot seat, defending the 2050 target date that Gov. Ned Lamont has attached to getting Connecticut off fossil fuels and onto 100% renewable energy.

“That 2050 is a ridiculous target, even the children from other countries are protesting that kind of a number,” a woman said to the group Friday. “I just want you to evaluate all of your studies that we’re putting out that number as a target date, because it is too late.”
“I think what I can say is that I don’t think anybody up here disagrees with you,” Humphries replied.

Lamont toughened the goal and it’s still not good enough, Humphries said. “But the good news is that people are recognizing the crisis that you’re talking about. And it’s ‘we’re moving in the right direction, but not fast enough.’ You’re absolutely right.”

“What we know is that the science that has emerged since then, has as this woman describes said, well, that’s really not fast enough, that it’s getting worse faster than we thought it was going to,” he said.

“If we have learned anything in the last six months, from the various reports that have come out in the United Nations and the fourth National Climate Assessment is, we don’t have the long term to be thinking about this,” Dynowski said, at another point.

“Methane is 100 times more powerful than carbon dioxide in the first five years, and warms the atmosphere, and in 10 years, it’s over 80 times more powerful. In 20 years, over 60 times more powerful,” she said. “… . So if you leave here, learning one thing from me, it’s that what were led to believe was that natural gas was much better, it is not…. That thought process, that this was a more beneficial fossil fuel, led to lot of policies being put on the books in Connecticut, and they are still on the books.”

The Sierra Club is trying to change those policies, she said.

“One of the big problems with natural gas is that the system from the drilling point all the way to your meter is leaking,” Dynowski said, explaining that the Sierra Club has conducted studies and found far more leaks than reported by the Public Utilities Regulatory Authority (PURA), which has a program for fixing leaks “when they’re about to explode.”

Haskell proposed Senate Bill 232, an act concerning the allowable percentage of leakage from gas pipelines, which would mandate that gas companies investigate unaccounted for gas in excess of 1%, she said.

“It also would stop the current practice, which is that we all get charged for lost gas. So all the gas that leaves we are actually paying for,” Dynowski said. “There is no other fossil fuel industry that they allow this for. You can’t dump a tanker of oil, and then charge the customer for it and walk away.”

Not only that, but Connecticut is still building gas power plants, that is “really quite inconsistent with the clean energy future … that is being advanced through wind and solar,” she said. “And so it’s really necessary to push back against that as well.”

A net metering bill would encourage solar energy, because, “part of the challenge around solar is that there are folks who say all the folks that don’t have solar are subsidizing those who do,” Humphries said. “All the studies that have been done actually show the reverse, that when we have solar in our roofs, that actually brings down rates for everybody else, because it reduces the infrastructure that we need to bring power to everybody.”

Bill 7205 would have Connecticut leading by example by increasing its use of zero-emission vehicles or zero-emission buses, because “38% of our greenhouse gas emissions come from transportation,” Humphries said. “And so we really got to get a handle on that. And one way to do it is to expand electric vehicles.”

A woman who identified herself as a millennial said teenagers want to be involved but are limited by their school schedules, and asked for guidance.

“I don’t think any of us are going to say that folks, our age or above, are going to solve this,” Humphries said. “And we want to figure out ways we can support younger voices to make sure we do. So, there’s too many of our peers that either have tuned it out or don’t feel there’s anything that can be done in the youth organizing, that’s been happening, and this is phenomenal. And it’s really exciting to see what’s happening globally, particularly.”

Dynowksi observed that college kids coming to the capital and high school kids can’t come when they’re in school “which is really unfortunate, it would be a great civics lesson to come up with an advocate for themselves. But the kids that have been coming, are actively organizing. Some of them. I think are planning to run for office. I think they were inspired by Sen. Will Haskell.”

“So it’s not a one thing or another. It is about constantly organizing, engaging each other engaging the organizations. … we can push the legislators as hard as we can. And Fairfield County is going to play a big role in the legislature, and we need you all to push your legislators, we’ll help amplify it,” Swan said. “…The only reason why we’re not going faster is the amount of power that some of these corporate interests have. And we need to organize to beat them.” 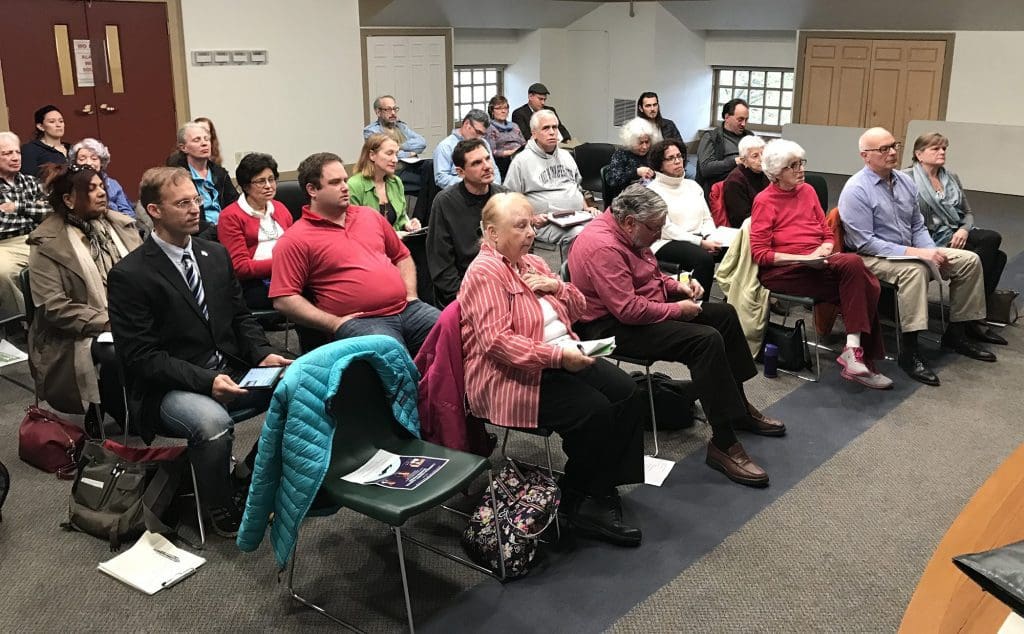 Studies are now showing that electric vehicles are not nearly as “green” as they are purported to be. Production of the batteries used in these vehicles plus the production of electricity used to charge these vehicles causes nearly as much damage to the environment as gasoline engines. Plus it can take 7-10 years to reach the break even point in buying an electric car vs gas powered comparable car when considering the upfront costs.

Why is CT reducing the amount of tax credits for electric cars and solar to name a few if they want us to go green?

CT’s greatest contribution to “green” has been maintaining a stagnant economy for an entire decade and discouraging hi-tech industrial development in our major depressed cities. Imagine how much worse our environment had been a well governed State enjoying the most vigorous national expansion since the War. Keep raising the property and income taxes ! Working for the “green” ! Honey, call the movers !

The Trump administration’s systematic rollback of industrial pollution controls flies in the faces of caring citizens and groups.

Very interesting. I’m curious to see what the presenters provided about elimination of all fossil fuels in 30 years with regards to the following, considering among other smaller matters, CT-based sectors have significant power generation technologies based on fossil fuels, such as:
1. United Technologies advancements for an all electric helicopter ?
2. Groton Submarine Bases plans for elimination of nuclear powered subs in favor of battery powered
3. Pratt and Whitneys progress on a battery, solar or wind powered jet engine?
4. Metro Norths timeline for eliminating all diesel powered locomotives?
5. Metro Norths project plan for megawatts needed and the solar capacity to produce said power for it’s rail cars
6. Shutting down Millstone Nuclear Reactors 2 generators, especially considering “it’s total capacity of over 2 GW, the station produces enough electricity to power about 2 million homes. The operation of the Millstone Power Station supports more than 3,900 jobs, and generates the equivalent of over half the electricity consumed in Connecticut.” https://en.wikipedia.org/wiki/Millstone_Nuclear_Power_Plant&gt;

Is there a PowerPoint or Microsoft Project Plan that was presented on the above or other related matters? 30 years out so I’d imagine there are commissions, task forces, scholars etc. who are already hip-deep in these alternatives and were able to target 2050 in a timely manner for 100% no fossil fuels. Thanks, Kevin

If we look across the nation at other States that have long term stagnant economies we find there’s no much enthusiasm for making “green investments”. That’s also true in CT. There is some encouragement for CT State investment in “deep water wind farms” south of Block Island. But that’s about the extent of reducing our fossil fuel imprint. For the foreseeable future CT will remain heavily dependent on fossil fuel energy. And continue to have one of the highest electric rates in the nation. But that’s a long story.