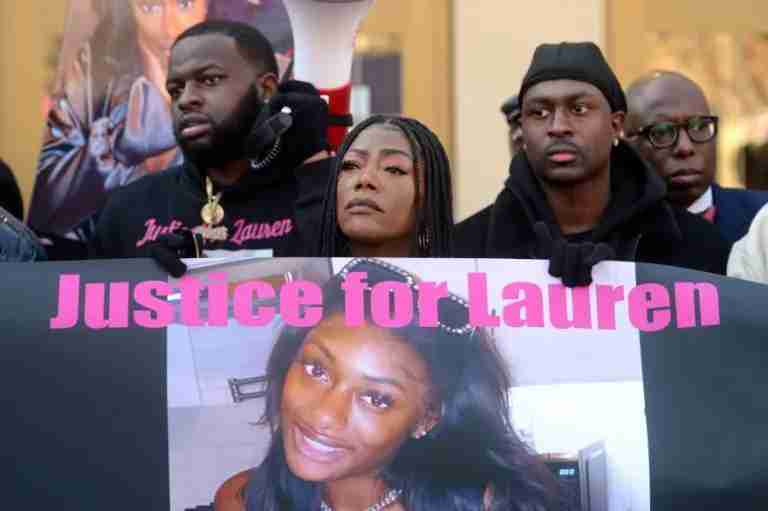 Shantell Fields, mother of Lauren Smith-Fields, stands with family members during a protest in front of the Morton Government Center in Bridgeport, Conn., Jan. 23, 2022. Smith-Fields was found dead in her Bridgeport apartment in December, and her family and friends marched in her memory on the 23rd, which would have been her 24th birthday. (Ned Gerard, Hearst Connecticut Media)

It was the landlord, not the police, who told Shantell Fields that her daughter was dead.

Lauren Smith-Fields lived alone in a Bridgeport apartment. Unable to reach her daughter by phone on Dec. 13, 2021, Fields went to her daughter’s apartment, where she found a note on the door from the landlord. It read: “If you’re looking for Lauren, call this number.” When she called it, the landlord told her that her 23-year-old daughter was gone.

“When it comes to Black and brown people, you need to treat us like we’re human. We have family members that pass away. Contact us as soon as possible,” Fields said in her testimony before the Judiciary Committee on Wednesday in favor of a bill that would require police officers to notify family members that a loved one had died within 24 hours of identifying a body. If police fail to make a notification within the timeframe, families could ask the Inspector General, an independent prosecutor of deaths in police custody, to investigate why.

“I just need for everyone to be treated as a human being and be notified of their family’s loss and be treated with respect and kindness, which the Bridgeport Department did not allow us,” Fields said.

Brenda Rawls’ family had a similar experience. Bridgeport Police found Rawls’ body the same day they found Lauren Smith-Fields’. Her family had looked for her for two days before they found her body at the coroner’s office. They also hadn’t been notified by the police that their loved one had died.

Rawls’ body was unrecognizable, her sister said. The family had to hire a private investigator to make sure it was her.

“I’m her sister and couldn’t recognize her,” said Deirdre Owen, who also testified in favor of the bill. “It broke my heart when my daughter turned to me and asked me, ‘Are we sure that’s her?’”

Rep. Steven Stafstrom, co-chair of the Judiciary Committee and a Bridgeport Democrat, was incredulous that the two incidents happened so close together, “that we have two families who have suffered the same fate and the same trauma at the hands of a single police department.”

The other co-chair, Sen. Gary Winfield, D-New Haven, said he was contacted by constituents who had similar experiences but whose cases did not make national news.

“Unfortunately, I can’t say that your situation is as unique as it ought to be,” Winfield told Fields.

Winfield and other legislators said there was significant support for advancing the bill.

“This is something Bridgeport Police Department, and every other police department, should be doing,” Stafstrom told Bridgeport Mayor Joe Ganim during the hearing.

“If you look at the bill, it’s common sense,” he told legislators. “You know, you think automatically that a person’s next of kin would be contacted immediately.”

Norwalk Police Chief Thomas Kulhawik said he wasn’t aware of similar incidents in Norwalk. “However, we have a detailed policy on death notifications.”

It’s truly heartbreaking when something like this happens.
Contacting next of kin can’t be an easy task, for various reasons & I can surely appreciate that, yet it needs to be done.
As police, detectives, etc… have to maintain a possible crime scene, having funding for a specialized staff that can focus on the family is as important.
Their bosses aren’t always aware, so that is a hard call, to make then responsible too,.
I can image each case can differ.
Still for the sake of humanity glad it’s made a law now. Sad how it came about.

Shouldn’t that be the job of a social worker, not the police?? What happened too all the defund the police crap?

You ALWAYS NOTIFY THE NEXT OF KIN! POINT BLANK PERIOD! While it might not be an easy task, it is their job!he! When someone dies in a car crash on the Merrit or I95 you always hear them say identity won’t be released pending notification of next of kin. An officer shows up at the house. If those girls were Lilly white, hmmm we wouldn’t have this issue. Gabby Pettito’s family was notified immediately. Shame on you BPD!

But this one seems pretty reasonable and restricted in scope. Kudos to the lawmakers for getting this one right, and doubly to the family for finding a way through their surely immense pain to keep things in perspective.

Why were families not notified? So glad the families bought this to everyone’s attention. So sorry for their experience makes my heart break