Violent crime in Connecticut declined by 12.5% between 2018 and 2019, the biggest drop in the country besides New Hampshire, according to data released by the FBI on Monday. 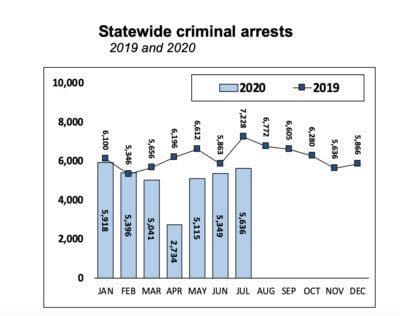 The number of arrests in Connecticut is significantly lower this year compared to last.

Connecticut saw declines in all categories except for murder and non-negligent manslaughter, which rose by 20% between 2018 and 2019, with 104 cases reported in 2019.

The steepest drops were in burglaries and property crime, both of which were among the biggest reductions in the country.

The federal report does not contain information on crime during the pandemic. There is no uniformly maintained database on statewide crime that is updated in real time, but arrests and admissions to prisons and jails have been down significantly since the onset of COVID-19.

Michael P. Lawlor, former under secretary of criminal justice policy and planning under former Gov. Dannel Malloy and current associate professor at the University of New Haven, said the new data is the result of reforms passed in recent years to shrink the criminal justice system and reduce crime, including raising the age for being included in the adult criminal justice system. That meant that 16- and 17-year-olds were removed from the adult system, lowering penalties for drug possession and offering diversionary programs for people with mental health conditions.

“What you’re seeing is a combination of best practices that have been employed over the last 10 years, all of which were focused on reducing crime,” Lawlor said. “It is just the cumulative effect of all these evidence-based, data-driven reforms and practices and funding.” 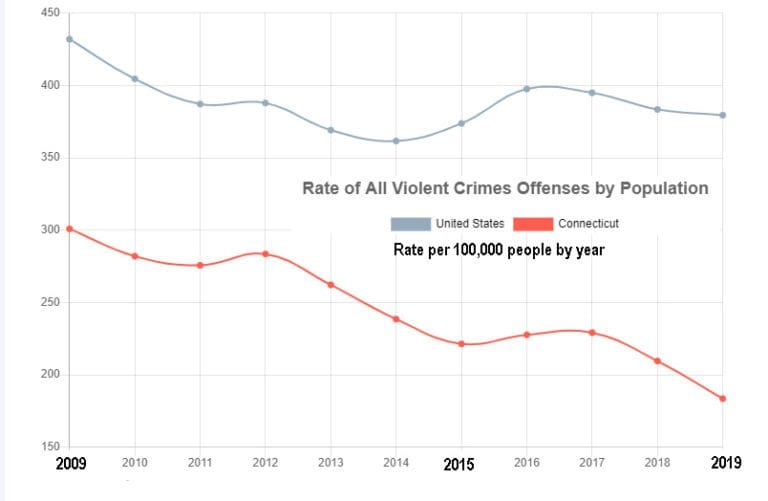 It’s because we have all moved to Florida

I think there are several items that are not taken into account in this article Which creates an illusion things are better- they are not.

1- perception is car theft, and items stollen out of cars has increased dramatically in Fairfield county. We can all blame people who make it easy to steal a car by leaving their keys in them, or car unlocked- but the crimes are still occurring

3- with our new “catch and release” protocols there is a higher rate of recidivism. I’m pretty sure you can shoot heroin on the steps of city hall- get a summons- and then go rob a car to pay for your next fix.

It’s hard not to not consider these statistics as very good news. If one views violent crime and property crime as a tax imposed on random people, then declining crime rates can reasonably be viewed as a tax cut, of sorts. Given that poor people are disproportionately victims of crime, then these statistics suggest effectively a tax cut for every Connecticut resident, but for lower income residents especially.

They have never called me back. I have filed multiple cases with them. When will they arrest Chief state’s Attorney richard colangelo for bribery?

“Comey ran the FBI Hartford. Blumenthal brought the bidggest criminal in the State to perform the Hillary Clinton investigation, the Mueller report and the Russian Collusion BS. They cut deals with Chief larrabee, Gallo, Nappe and many more. Gallo was the co-conspirator in the three year FBI sting operation of East Haven that Senator murphy is involved with. Now Himes is involved. ”