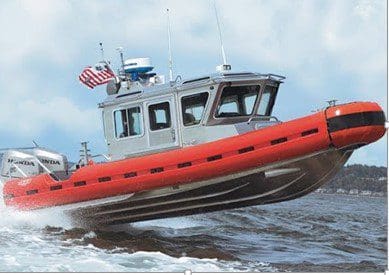 NORWALK, Conn. — A nearly $400,000 federal grant will be used to enhance security of the city’s waterfront, including purchasing a police boat and installation of surveillance cameras.

Approval of the funds from FEMA and the Department of Homeland Security was announced Friday at a news conference led by U.S. Rep. Jim Himes (D-4th District) at the city’s Visitors Docks in Veterans Memorial Park.

Himes said Norwalk Harbor is commercially very important and is a huge asset to the people of Norwalk and the people of Connecticut, “so it is a security risk and a commercial risk.”

Broken into three parts, the $393,287 grant will be used to acquire a refurbished patrol boat to replace two boats the Police Department intends to sell, install video cameras around the harbor that will be incorporated into the city’s existing video surveillance system, and upgrade communications equipment aboard the city’s main fire boat so it can receive inter-operation marine charts and data from the Coast Guard.

“It’s an exciting day,” said Police Chief Thomas Kulhawik. “We’ve been looking for an upgrade to our police boat for some time.”

“Whatever they did this time, I don’t what it was, the magic they worked, but we got it so that’s wonderful,” Kulhawik said. “So it’s going to make a big difference in the services that we perform for the community here and in the harbor.”

The police Marine Unit has a custom-designed 35-foot-long, aluminum hull patrol boat it purchased in 1991 and two Zodiac rigid-hull inflatable boats, one acquired in 2006 and the other in 2008, which are commonly referred to as RIBS. It intends to sell the two Zodiacs when the new boat is received around a year from now, Zecca said.

Ronciske said the new vessel will be a refurbished 25-foot-long SAFE Defender-class boat retired by the Coast Guard.

Although similar in appearance to the Zodiacs it will be replacing, a Defender boat has an aluminum hull surrounded by a rigid, foam-filled collar. As with the Zodiacs, Defenders are propelled by twin outboard engines.

As for enhanced surveillance of the harbor area, Karen Del Vecchio, the city’s director of information technology, said an “extensive network of cameras” will be installed.

Zecca said the cameras will be mounted in Veterans Memorial Park and Calf Pasture Beach Park, both of which are in East Norwalk.

The funding also covers the cost of extending the city’s private fiber optic network to the camera locations. 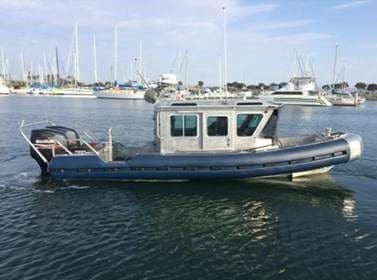 “It’s going to be a huge improvement, with all the latest touch screen capabilities,” Gatto said.

Commenting on receipt of the grant, Mayor Harry Rilling said that, during these times, it is critically important that the men and women of the police and fire departments have necessary resources.

“They need to have the funding that we can provide for them, whatever it is that they need to get the job done,” Rilling said.

Himes noted that the grant was unrelated to the 1033 program, whereby excess military equipment is transferred by the Defense Department’s Defense Logistics Agency to civilian law enforcement agencies. The program has been controversial for ostensibly helping to militarize police forces.

“This is very different,” Himes said. “We need to be smart about this, and what I mean is, it is legitimate to say that there are instances in which police departments appear over-militarized.”

However, he said, “we all hope that it’s rare, but there are instances where we want our police department to have the tactical gear that they need to deal with those very rare instances, but that are truly, potentially horrendous, whether it’s a sniper situation, a hostage situation.”

Story updated at 6 p.m. Wednesday to include different photographs.

Reports that King Industries sells HFA, Hydrofluoric Acid, are disturbing. HFA is imported an sold, they had two accidents that they reported? What is the kill zone? 3 miles in 19 minutes?

Money is need to check for PCVBs in the river, spending money on boats and cameras is great. Do the Oysters have PCBs? Give the money to the Commission. Who will watch the cameras? Is King Industries a soft target for Al Qaida? Yes it is. What chemicals do they sell, at what temperature do they vaporize? and what is the kill zone? We asked the City and Candela refuses to tell us.

This appears to be a grant awarded by FEMA & DHS as a direct result of an application proposal prepared and submitted by our great Police and Fire people. These type of Federal grants do not require any input or action from politicians. So someone tell me why Himes needs to be on the scene show boating? Obviously trying to take credit for making the.grant award happen. Wish he would just stay in DC and do what he seems to do best which is Trump bashing with his party cronies. Himes is an example of why term limits are needed.

So sad. Hines did nothing to secure this grant. Yet there he is grandstanding. If only Mr Hines actually cared for the citizens ofNorwalkwhat difference he could possibly make

@Townie and Madden: You realize Himes was there because Dick Blumenthal was busy taking pictures elsewhere. Quite honestly, that might be the first photo opportunity Blumenthal has missed in 10 years.

Where do they get such wonderful toys?