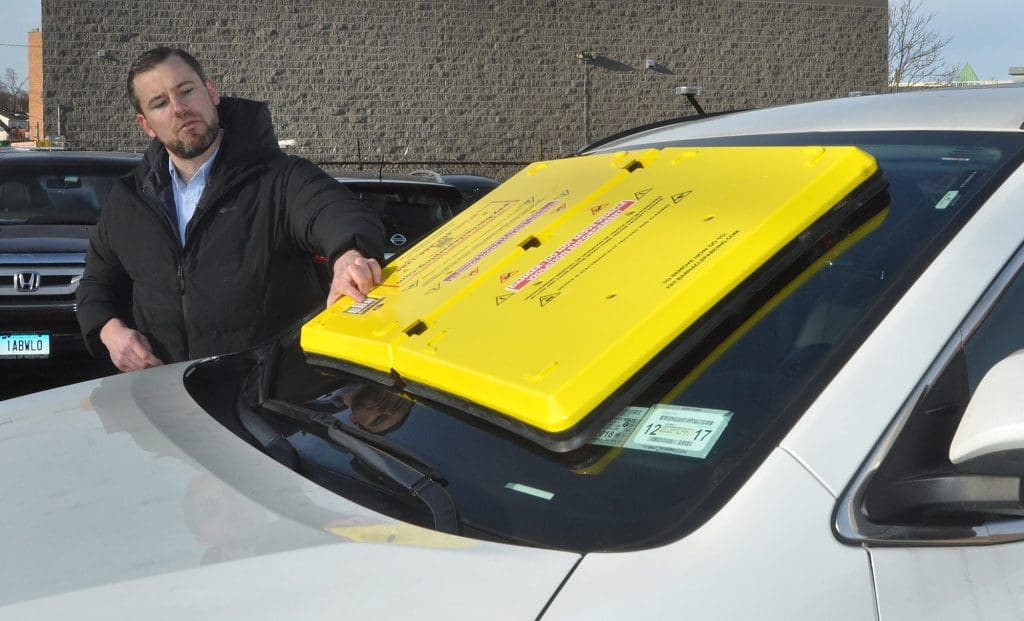 Instead, under a new system Fedor will soon deploy, drivers who have illegally parked would find a hard-shelled plastic device suction-cupped to their windshield. ‘The Barnacle’ is much kinder and gentler than coming out to find their car gone, he said.

Fedor Auto Body has more than 400 contracts to tow cars from private lots, he said. It’s up to the individual property owner to decide whether they want to have a car towed or use the new system.

The company was founded by Kevin Dougherty.

“We saw existing methods of booting and towing as sometimes being over the top,” Dougherty said.

Drivers can either go online or call a number that is on the device, pay a fine and receive a numerical code that they input into the device to unlock it, they said. The Barnacle can be folded and put into the car’s backseat and must be returned within 24 hours. Drivers can take it to Fedor’s business at 32 Woodward Ave. and put it in a dropbox. Or, there may be a dropbox at the lot they were in when the device was installed. 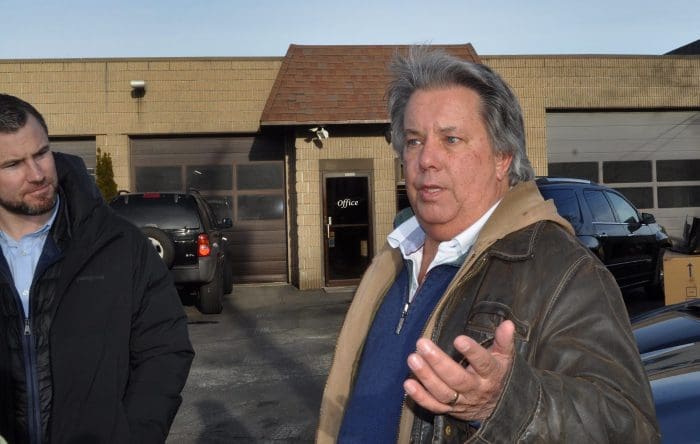 Allen Fedor, right, explains his plan to lesson the number of vehicles his company tows, Jan. 7 in South Norwalk.

“It’s a much friendlier way, if there is such a thing, to do this,” Fedor said. “Because the people still have access to their car. They get their car right away, they don’t have to find a Uber or a ride down here, there’s no confrontation.”

Fedor said he and Dougherty met with Mayor Harry Rilling, Norwalk Police Chief Thomas Kulhawik and Deputy Chief Susan Zecca in November, to explain The Barnacle. Everyone approved, he said.

Asked about the Barnacle Tuesday, Rilling said the Parking Authority is considering it.

“This is a private issue right now,” Rilling said. “We had a meeting, and I told them it’s not for the City to support or deny. It’s their right. I had the meeting just so they could explain what they are doing. They asked for our blessing and of course I said that’s not for us to decide. You’re working for private companies, it’s for them to decide and then if there are any legal issues, they’ll come up.”

“The Parking Authority only tows cars in relation to the boot/tow operation,” Administrative Services Manager Kathryn Hebert wrote Wednesday.  “It contracts with Paylock, a smart booting company.  The company uses a very lightweight and reliable immobilizing device (around 12 – 15 lbs), that is put on one of the vehicle’s tires.  Both the Barnacle and the Paylock ‘boot’ are lightweight and operate in a similar fashion using smart lock and release technology.  The Parking Authority does review new products in the marketplace to determine the best product for its customers.  At this time, there are no plans to change the current smart immobilizing device.  Last year the Parking Authority towed 11 vehicles.”

He went to a Baltimore tow show more than a year ago and saw The Barnacle, and decided to look into it, he said.

Both Fedor and Dougherty emphasized that parking isn’t cheap, as property prices are high in Norwalk. It isn’t right that someone who is paying a high rent comes home to find someone else in their parking space, Dougherty said.

The Redevelopment Agency commonly assigns a $40,000 value to a parking space in a new garage.

Tow trucks can’t get into the garages being built with new developments, because their lights are 8-feet high but the garages have a 6-foot, 6-inch clearance, Fedor said.  The Barnacle gives property owners a remedy for people who park illegally.

Fedor said he hasn’t decided what fine a driver will pay to release The Barnacle from their car.

“There’s no limit but I want to keep it less than a tow,” Fedor said. “So, not only is it easier for people but it’s less costly. It will get the message across but make it less for everybody.”

How is this better than a boot? I can picture a moron driving off with this on an killing a pedestrian. At least with a boot you can’t move the car.

Brilliant. I would like to purchase advertising space on them.

um cant you just pry it off? last time i checked suction cups aint that strong.

I like this much better than towing; however, I have a very strong suspicion that it is not lawful for private property owners to essentially take a car hostage until a fee of the owner’s choosing is paid. The State has pretty specific laws/reg’s on when a car can be towed from private property, what must be charged, etc. but I don’t believe that translates to a privately imposed fine w/out a tow. But that’s just my hunch w/out doing the legal research.

Jake Cassidy — It has a tremendous grip. Also, see the reference in the story below about trying to tear it apart. H.F.C.

Interesting point of view, and I don’t doubt you’re correct, Adam. More alarming is the fact that if you’re correct, the Mayor, and Police Chief has essentially signed off on something, which is at worst illegal siezure. Hmmmm.

Try reading next time. The article states that the City did not approve nor deny the use of the barnacle, because it is a private dispute.

Take some of your own medicine, Chris:

“Fedor said he and Dockery met with Mayor Harry Rilling, Norwalk Police Chief Thomas Kulhawik and Deputy Chief Susan Zecca in November, to explain The Barnacle. Everyone approved, he said.”

Maybe Fedor can pay his taxes with the proceeds so he’s not on the annual Tax Lien sale that City Hall has each July?

I got nailed with one of these last night in an empty parking lot of closed shops while at the movies (Garden Cinema). “Illegally” parked? C’mon. Yes, there are signs telling you to use an app on your phone to pay, and I admittedly ignored that thinking paid parking wouldn’t be enforced on a weekend night with all the stores closed; but more importantly, 1) the guy next to me DID pay on his phone, and got barnacled anyway as the guy who comes around and does it doesn’t check, perhaps doesn’t even have a way to check; and 2) Though I followed the steps and got a release code on my phone, it did not work and I spent an hour in the freezing cold trying to call and reach someone and wait for them, and when they finally came, they couldn’t work it either and had to release it manually with a physical key. All this in a virtually empty shopping center parking lot where the shops are closed. If somebody parks in my driveway, do I really have a right to immobilize their car and demand ransom to release it? Wouldn’t my recourse be to call the police?

Got Barnacled on Saturday Morning at 607 Main Street, Norwalk. After dropping my son off at the DMV I went to buy some lottery tickets. I stopped in A to Z for lottery tickets. Purchased ticket at 9:18am and spoke with guy at counter for a few minutes. I walked across the street to check on my son at DMV and returned about 10 minutes later leave to find the Barnacle. There was no intent to stay there (if there was I would have left it on the car and removed it much later). I tried to get in touch with Barnacle/Fedor with the number on the unit (203) 266-1984. The first try was at 9:38am, then 9:39am and I spoke with a women who advised to try to find “the guy” to speak with him/appeal the boot. Then called again at 9:52am, 9:55am where I just decided to pay the ridiculous $110 fee and see what I could do after. Once removed, I could not find the drop off box and tried to get someone on the phone at 10:14am and 10:18 with no success. The recording said it was at 607 Main, but did not say where. Finally someone in Planet Pizza told me where it might be (looks like a little garbage bin tucked in the back of the strip mall).

For 10-15 minutes they jump on you, not caring if you were a patron of the stores or not. The gentlemen in A to Z was willing to confirm my story if I was able to find the driver.

I can provide copies of my time stamped lottery ticket stamp and the phone log if that will help to obtain a refund.

Happy to discuss this with anyone.