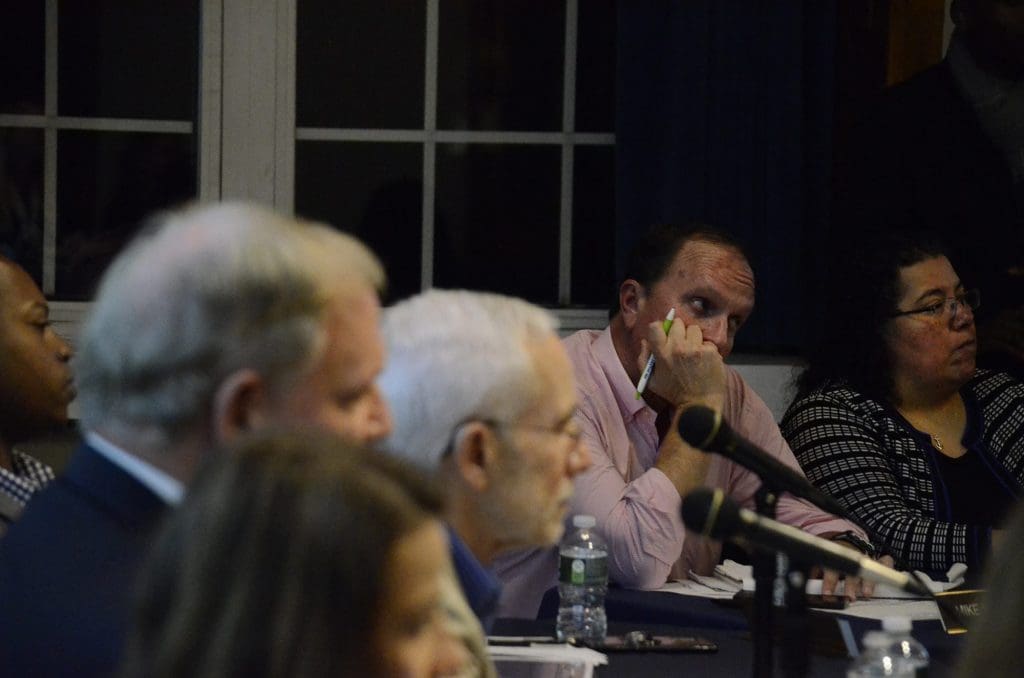 Norwalk Board of Education member Mike Barbis, second from right, listens to the public berate him during last week’s BoE meeting in City Hall.

NORWALK, Conn. – A public records request confirms that Mike Barbis’ infamous June email was sent to the four people he said it went to, Mayor Harry Rilling among them.
Evidence indicates that none of them forwarded the email, the request shows, invalidating a Nov. 3 statement made by Norwalk Chief of Staff Laoise King and keeping the heat on Rilling, King, Democratic Town Committee Chairman Ed Camacho and DTC Vice Chairwoman Eloisa Melendez as the public’s chief suspects in the debacle.
Barbis’ profanity-laced June 5 email, ending with the phrase “Blacks f— Latinos,” has been called “vile” and “disgusting.” It was sent to Norwalk Branch NAACP President Brenda Penn-Williams three days before the election. She sent it to the press and members of her community; calls for Barbis to resign from the Board of Education quickly ensued and escalated Tuesday into a raucous BoE meeting in City Hall.
Some citizens, who defend Barbis, are focused on who released the email. Penn-Williams said it was sent anonymously.
NancyOnNorwalk put in a Freedom of Information Act request for the emails on Tuesday; King was made aware of the request Friday and instantly provided emails that had been asked for. Other FOI requests are in progress.
The email chain shows Rilling, King, Melendez and Camacho as the only recipients of the angry Barbis rant, which was sent at 8:49 a.m. June 5. “Screw building schools in South Norwalk – if those a**holes don’t want them, let’s build them where they do,” Barbis wrote.
Neither King nor Rilling forwarded the email, the FOI request results show. Camacho and Melendez did not provide emails. Melendez said, “I didn’t respond to the email from Barbis and don’t have anything more,” and explained that she hadn’t shown anyone the email and hadn’t forwarded it. Camacho wrote, “I have no first-hand knowledge regarding the release or publication of the email.” He didn’t forward it, he said Wednesday.

This flies against King’s explanation made at 1:13 a.m. Nov. 3, 45 minutes after Barbis had implicated the four: “The email was forwarded to other people at the time it was received. I have no idea who those people forwarded it to or who those people might have forwarded it to.”
On Saturday, she explained, “I knew there had been discussion about the email with others back in June so I assumed it had been shared then. I also knew no one on the chain had released it in the days leading up to the election.”
Barbis and others accuse Rilling and his supporters of releasing the email to help him win the election. Rilling has called this “ridiculous.”
Rilling on Thursday said he didn’t know who sent Penn-Williams the email.
In early October, Rilling said his campaign had done a poll that showed him ahead two to one. He did not appear to be worried he’d lose the election.
Rilling won with 55.4 percent of the vote, the same percentage he had two years ago.
On Friday, he wrote, “That poll focused on D’s and U’s. Not R’s. So we knew the numbers would change. We were encouraged by the fact the U’s were trending towards us.”
He added, “Our telephone polls were favorable as well. Not sure of the exact numbers.”

Penn-Williams: ‘Anonymous’ sent it
“I have no clue,” Penn-Williams said Saturday, when asked who sent the email.
The name the email came from was literally “Anonymous,” she said. She couldn’t look up the email address it came from because she accidentally deleted the email that day. No, it isn’t in the trash.
She’s had a Samsung 10 for maybe six months and, “I don’t know what the hell I’m doing,” she said. “…I’m old. I can do some things, basic stuff.”
Copying and pasting on a phone is hard, Penn-Williams said.
Told some people wouldn’t believe this, she said, “They can say whatever they want… Who am I going to cover for?”
She asked what reason Rilling would have to send the email, because, “Barbis was running unopposed.”
She doesn’t think Rilling, King, Melendez or Camacho did it, she said. “My belief is, (Barbis) sent it to the Board. Who did he blind copy it to?”
“I do not like the BCC function in email so I do not use it.  Thus, no one was BCC’d on that June 5th, 2019 email,” Barbis said in a Sunday email.

Board member Bruce Kimmel, who Barbis mentioned in the June 5 email, has said he did not receive the email when it was originally sent and the first he heard of it was on Nov. 2. He declined further comments.

There were no emails sent to Penn-Williams on Nov. 2 from City email addresses, Information Technology (IT) Director Karen DelVecchio said.

Unanswered question
Staff members are known to examine public emails, when an FOI request is submitted.
NancyOnNorwalk asked Norwalk Public Schools Communications Director Brenda Wilcox Williams on Thursday if there had been any FOI request that would have put emails sent in early June under staff scrutiny. She has not replied.

Why DTC leaders?
The email was sent to Barbis and Melendez on their personal email addresses. Camacho is BET chair and Melendez was on the Common Council. As mentioned, they lead the DTC.

“I sent the email to all 4 as I was trying to get all Democratic leaders to work on this logjam we were in,” Barbis wrote Sunday. “Where are all of these kids supposed to go to school?  The new schools have been needed, are really needed and, as you heard Tuesday night, will most likely not even be enough.”

He wrote, “I wish the press would focus on the actual issues—shortage of classrooms and schools due to ongoing enrollment growth, shortage of our fair share of funding from the State of CT – rather than the email I sent out of anger and frustration. That’s the real crisis Norwalk is facing – not my profanity-laced confidential email released 3 days before Election Day.  Our budget and enrollment issues are not going away.  This is what is important and it is going to impact every one of the 12,000 students in our district as well as every taxpayer.”

The real problem is the mayor having a chief of staff.

And with all this dust up and distraction, the real question remains……..: Who are the ones actually getting screwed?? And by who?? Whom?? See. We need those schools.

Stay strong Mike Barbis—you nailed it with this quote: “I wish the press would focus on the actual issues—shortage of classrooms and schools due to ongoing enrollment growth, shortage of our fair share of funding from the State of CT – rather than the email I sent out of anger and frustration…This is what is important and it is going to impact every one of the 12,000 students in our district as well as every taxpayer”.

This Laoise King’s backtracks, Rilling lets others do the talking, Camancho hedges with ‘I don’t have first hand knowledge’, Penn Williams gets an email from ‘anonymous'(is that even possible?). None of this passes the smell test.

The Democratic Town Committee and Rilling campaign’s tactics are coming back to haunt them. Wanting to win the election at all costs, they repeatedly used race as a weapon to silence and smear. Nice leadership we have here in Norwalk.

And there is absolutely no possibility that anyone in
city hall would lie about an email being forwarded, especially when there is no way to verify it.

If you really think this email wasn’t sent by one of the 4 original recipients, either in a printed copy, screen shot, carrier pigeon, or other means than electronic forwarding, then I have a Walk Bridge to sell you.

Am I missing something? Emails do not need to be forwarded to be disseminated. Crooked on so many fronts

Nothing good is going to happen on the Norwalk BOE until Mike Batbis resigns and they can move on and go back to handling educational topics.

Glad to know that the most urgent progressive issues are being taken care of by our elected officials.

It’s not like they’re about to displace a bunch more black and brown people for a bougie coffee shop and expensive commuter housing or anything.

It’s not like we’re short funding for ELL students or anything, people we WELCOMED into our community and have since treated like s***, like hired help.

Taking Barbis down is a waste of time. He’s literally just one man. There are dozens of other progressive issues that need to be taken care of first. Maybe Barbis wouldn’t get re-elected if the Norwalk NAACP focused on actually making life better for the POC who live here.

How long before Brenda fesses up to who really sent her the email?

Her story is B.S. and anyone who reads it knows it.
She was handed the Mike Barbis silver bullet and you think the email was randomly deleted?

This stinks of lies and deceit.
Wake up Brenda. If the Mayor really wanted to get rid of Mike Barbis he would have brought the email to light well before the DTC candidate endorsements. You are being played.

My money is on macho camacho for sending it over. I still havent heard one of the four say it was disgusting that he sent that email.

sooo what’s up with the needed new schools? cause this email fiasco is neither here nor there at this point.

Ladies and gentleman…your Norwalk Democratic Party.
SOMEBODY is lying.

@David W. – why don’t you just use your real name? What are you afraid of?

What’s missing, where is the conversation from the emails? Hard to believe not one of the 4 recipients replied in June, at the very least condemning the hateful language.

Frustration from Kimmel and Barbis? Is trying to work with city hall so bad that BoE leaders have reverted to hateful shouts and abrupt resignations? In the height of the racial chaos, the Mayor got dinner? Nothing has improved and Kimmel feels the BoE is a “punching bag for folks at city hall”

There should be no tolerance for hateful rhetoric and racism. Barbis is NOT the only display of ignorance here. At least he was attempting to do his job, in a system that is not functioning well. Where is the city leadership?

There’s something wrong with a system that leaves its children’s education victim!

@David McCarthy (who lives in Florida) seems to always chime in on topics that have no affect on his life what so ever. This sour grapes vendetta against Harry Rillings will never die will it David. You are living the good life in Florida now. Sipping on virgin daiquiris, getting redder relaxing in the sun, SPF 100 as white as snow covering your nose. Let it go David. Enjoy retirement. Norwalk is surviving without you. You hang onto relevance through message boards and bad YouTube videos. Isn’t there a bush in Florida you should be secretly hiding in to record someone who didn’t sweep the sand from their sidewalk or something?

Mike Barbis is a hard-working, caring BOE volunteer, and a true asset to this city. Seems like Bruce was embarrassed by the action of the NAACP last week. Why would he want to stay on and deal with this?
Please do not resign, Mr. Barbis.

Sid. Which office in City Hall do you call home?