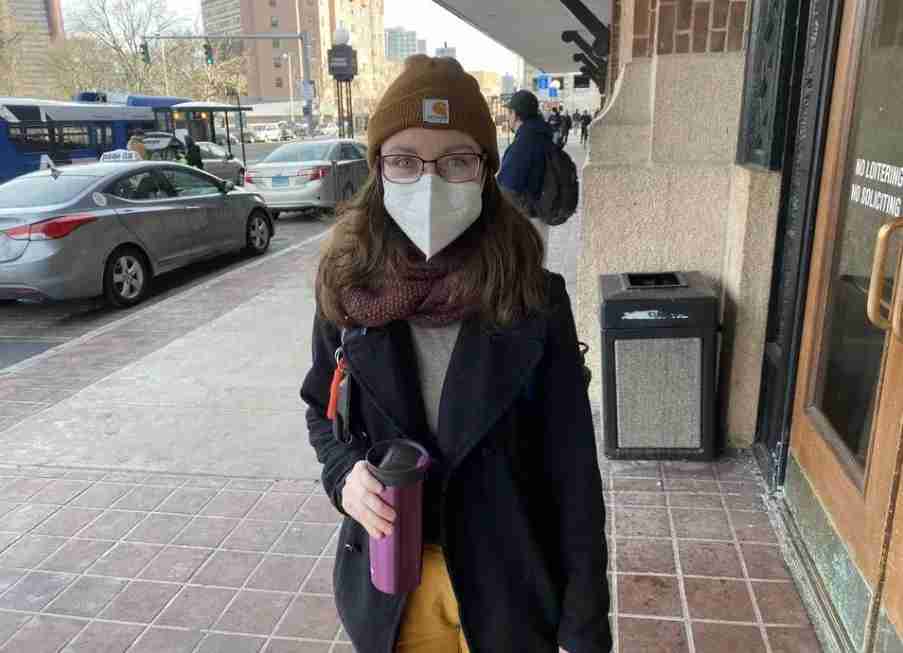 With her car broken and gas prices up, Briana LaMare headed into Union Station to catch the 9:47 a.m. train Tuesday — part of a new commuting routine that’s growing on her.

LaMare heads from New Haven each morning to Darien to manage a shop called Hands On Pottery.

LaMare, 25, said the inconvenience of not having her car for commuting has ended up being a blessing in disguise.

“Gas prices have gotten way out of control,” LaMare said. ​“If anything, I feel like I’ve caught a break.”

LaMare has lived in Westville for nearly five years. Chatting before the train’s arrival with the ​“Word on the Street” segment of WNHH’s FM’s ​“LoveBabz LoveTalk” program, she said that taking the train to work has allowed her to save a significant amount of money on gas and car insurance.

She has been taking the train to work since her 2002 Subaru Outback broke down on March 2. She decided not to fix it.

Before the breakdown of her Outback, she spent approximately $200 on gas alone a month.

“I didn’t realize how much cheaper it is to commute,” LaMare said. ​“I’ve been trying to save money and live my best life.”

The only downside for LaMare has been getting up at 7 a.m. instead of 9 a.m. to leave time to catch the bus from Westville and connect to the train. She took an Uber Tuesday morning to not risk missing the train and being late to open up the store.

“I would say it’s worth it since I’m saving money,” LaMare said. ​“I mean, I would much rather be in the privacy of my own car and to be able to drive in to work, but it’s $5, almost $6 a gallon — that’s outrageous! Most people can’t afford that.”

Another advantage she didn’t expect from bus-and-rail commuting: the chance to view the city through a fresh set of eyes, to explore the Elm City more.

She also gets a chance to talk to others on the bus.

“There’s people on the bus who are always super friendly,” LaMare said. ​“And they want to kind of see who’s in the community and ask questions. I love it!”

Before the war broke out in Ukraine, LaMare paid $20 to fill up half a tank of gas. She said that the price jumped to $50. LaMare said that she’s ​“in understanding” of what it takes to support the Ukrainian people.

“It’s not ideal,” LaMare said. ​“But I’m sure what they’re dealing with isn’t even close to ideal. It’s heartbreaking and unfortunate. I hope we can come to a resolution soon.”

Once LaMare arrives at the Darien station, it’s only a 5- to 10-minute walk to her job from the train line. Her initial plan was to get a new car right away to get back on the road, but now she’s reconsidering that idea.

“With the gas prices and where it’s at, I might just stick it out a little longer and keep saving until I can get a nice, new set of wheels,” LaMare said. ​“For now, I just hope we all stick together and be kind to one another as we go through this time.”

Before the war broke out in Ukraine, LaMare paid $20 to fill up half a tank of gas. She said that the price jumped to $50. LaMare said that she’s ​“in understanding” of what it takes to support the Ukrainian people.

How are higher gas prices supporting the Ukranian people?

I would suggest Math class for Briana. While the Ukraine War has been responsible for adding to the already high price of gas it is impossible for her fillup to go from
$20 to $50 over the past 4 weeks. It is realistic to say it’s gone up that much since Biden became President. I wish reporters would do at least a minimum amount of fact checking before writing an article.
This article says as much about the poor state of journalism as it does about mass transit.

So when i fill up, a portion of my gas monies are directed to help Ukraine?Wait, I though we were buying oil from Russia? So we are helpng Ukraine and Russia? That makes sense.

Somoeone figuring out to take the train to a job less than 50 yards from Darien train station doesn’t seem too profound for an article. Next update maybe she will start driving to park and ride the train, saving both time and money.

Amen John. Nothing against her and really great place for the kids to make gifts for grandparents and rainy day activities btw. Absolute basic fact checking or common sense is almost absent from journalism today and the fact that the NH Independent has an editor is even worse. Gas prices are abhorrent but nowhere in CT, much less New Haven, has gas hit “almost $6”. Outside of midtown Manhattan, we haven’t seen regular grade anywhere over $5 yet. Just the 10 seconds basic math of what a half tank of a Subaru holds would mean she went from about $2.22 to $5.55 in less than a month.

Lets convene economics class. Some prices do not increase all prices. And a general price increase doesn’t increase every individual price. We all know our Presidents are not professional economists. So when the President claims that Russian President Putin is responsible for higher gas prices we know to keep on looking. Serious folks know that the big surge in M2 money supply orchestrated by the Fed- up almost 50% in 2 years – explains surging inflation.

Serious folks know the US is virtually energy independent and the worlds’ largest source of crude oil and oil products. And that Pres Biden has acted to reduce dependence on fossil fuels. As we learned in high school when supply of a commodity declines the price rises when demand remains unchanged. Some DC folks belonging to the D Party are not unhappy to see rising energy prices. Clearly if fossil fuel prices are high enough those advocating “green energy” will not be unhappy.

In simple terms those running the fossil fuel energy firms are making hay while the sun shines. It’s how our competitive market economy works. And has worked for several centuries. Those upset about rising prices ought review our early history when prices soared to incredible levels as we began printing paper money. Some one has to pay for the trillion dollar Federal Gov’t programs.

The problem with sharply rising overall prices aka inflation is that the lower incomes families are the ones hurt the most. And that the Feds usual response to rising inflation is to raise interest rates. That often results in a recession. So we can look forward to ever higher prices, especially for fuel, higher interest rates and an eventual corrective recession. Likely before the 2024 election.

And remember to prepare for higher taxes. CT’s economy, stagnant for an entire decade, will take it on the chin from a forthcoming national recession induced by the Fed’s higher interest rates. As apples fall from trees and the sun rises in the east and sets in the west rising taxes are our future – local, State and even nationally. When the next property revaluation is done the howls of dismay will fill our skies. Not a good time to spend big monies for unneeded new schools amidst a failing public school system.

“It was costing her $200 a month on gas alone”??? Isn’t a monthly train pass from New Haven to Darien $281 per month? That’s a loss right there prior to the gas hikes that are sure to go back down. And now she has to add a monthly bus pass and adds 2 hours to her commute each way. 4 hours per day? 20 hours per week? ON TOP OF WHAT HER NORMAL COMMUTE WAS!! As they say, Time is money.

And this is newsworthy. How about the people that cannot affor gas for car nor train fare?

It realistic to the point of being fact that gas prices have gone up 150% since they started the price rise in April of 2020 when Trump was still president.