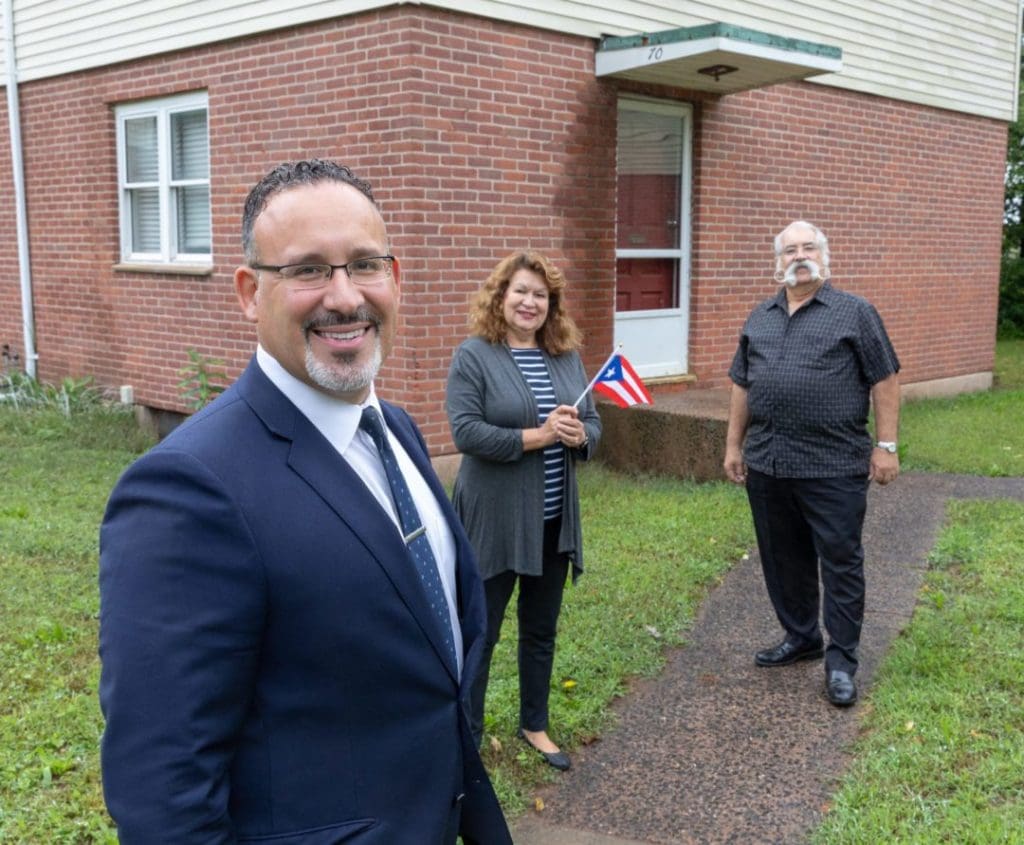 Miguel Cardona with his parents outside one of their first apartments. (CTMirror.org)

President-elect Joe Biden Tuesday evening announced that Connecticut Education Commissioner Miguel Cardona is his pick to lead the U.S. Department of Education, an agency the president will rely on to get millions of students back into the schools closed by COVID-19 and to convince Congress to invest much more in education for a host of the president’s priorities.

“In Miguel Cardona, America will have an experienced and dedicated public school teacher leading the way at the Department of Education — ensuring that every student is equipped to thrive in the economy of the future, that every educator has the resources they need to do their jobs with dignity and success, and that every school is on track to reopen safely,” Biden said in a Tuesday evening press release.

Biden has promised to get most schools back open in his first 100 days in office. That’s April 30.

Cardona’s approach in Connecticut — where one-third of students had the ability to attend school full-time in-person during the second week of December — may offer some clues as to how he will approach the task at the national level. Cardona has resisted calls to be heavy-handed and force schools to either open or close. Instead, his agency has issued a plethora of guidance to help district leaders and has used federal pandemic aid to buy masks, plexiglass, laptops and internet access so that every student has the ability to learn from home.

To help districts accommodate some of the teachers uncomfortable about returning to teaching in-person, he got Connecticut’s state board of education to loosen teacher certification requirements to open classrooms to more people during the pandemic. He’s also used the public spotlight to call out the “education emergency” that school closures are causing, releasing data that shows the state’s most disadvantaged students are missing twice as much remote school as their peers attending in-person. The administration has also tracked COVID-19 cases in districts throughout the state, which Cardona regularly points to as proof that the virus is not spreading in schools.

In Tuesday’s announcement, Biden and Vice President-elect Kamala Harris also began to focus on an expansive list of non-COVID-related priorities for Cardona.

“He will help us address systemic inequities, tackle the mental health crisis in our education system, give educators a well-deserved raise, ease the burden of education debt, and secure high-quality, universal pre-K for every three- and four-year-old in the country. As a lifelong champion of public education, he understands that our children are the kite strings that keep our national ambitions aloft — and that everything that will be possible for our country tomorrow will be thanks to the investments we make and the care that our educators and our schools deliver today,” Biden said.

Cardona’s spectacular rise over his 22 year career — from teacher to principal, to assistant superintendent, to the state’s first Latino education commissioner, to Biden’s nominee of education secretary — drew praise locally and nationally. Many celebrated his background — Cardona described himself as a “goofy little Puerto Rican” born in public housing who entered public school speaking no English. Others celebrated the five years he spent in the classroom as a teacher and the drastic shift this nomination marks from his billionaire predecessor, Betsy DeVos.

And those who have worked closely with him through the years shared their awe of his collaborative approach.

“He always has a big smile, a positive attitude. And even on the toughest day, you could count on Miguel to stay positive,” said Meriden Superintendent Mark D. Benigni, whom Cardona worked alongside for five years before becoming the state’s education commissioner. Benigni — the point-person who implemented state-ordered teacher evaluations linking student test scores to ratings — said he was relieved that Cardona got the buy-in from the local teachers’ union by agreeing to use only the test scores of students who had been in the district for a considerable amount of time.

As news began to leak that Biden was narrowing in on selecting Cardona, Gov. Ned Lamont said the work the commissioner has done since starting the job in August 2019 has been invaluable. Lamont called him a “superstar” earlier Tuesday.

“That’s a loss for Connecticut, but it’s a big win for kids and teachers and education around the country. We’re fortunate that Miguel was able to take the lead here,” he said.

Cardona — who has not been available for an interview since his name emerged as Biden’s pick — has thought a lot about titles.

Stereotypes and low expectations placed on him as a Latino child “just made me hungrier,” Cardona told the Mirror in August 2019, his first month as education chief.

He also thought about the role titles play to improve education.

“Leadership lesson: stay humble. Titles don’t make you a good leader, action does. … Be remembered by testimony, not titles,” Cardona in 2017 shared with the University of Connecticut’s Neag School of Education, where he has earned three degrees and one certificate.

Cardona has focused much of his career on ways to close gaps in opportunities for students to thrive. He wrote his dissertation on how to better serve English learners. Later, he led the legislature’s Achievement Gap Task Force for four years.

“Addressing the achievement disparities in CT is more than just our moral obligation. It makes fiscal sense,” Cardona wrote in the task force’s 2014 report. “In Connecticut, the costs of remediation or incarceration are greater than education. In order to address the conditions that perpetuate underachievement, we must confront poverty and systemic barriers while constantly improving upon our practices in all state agencies.”

That report recommended tackling the obstacles created by poverty, by providing day school subsidies and universal preschool so children don’t start kindergarten behind those who could afford a high-quality preschool. The panel also recommended creating incentives to allow more affordable housing to be built in high-resource school districts.

With glaring gaps in achievement between white students and their peers in states throughout the country, the Biden administration has promised to try to level the playing field to help struggling students.

“Even as we work to reopen our schools safely and responsibly, we also need to build a public education system that lifts up all Americans, regardless of race, background, or ZIP code,” said Vice President-elect Kamala Harris. “From making universal pre-K a reality for three- and four-year-olds to ending the status quo where school districts with the greatest needs get the fewest resources to making college more affordable, Miguel will help make sure all of our students have the knowledge and skills to thrive in a 21st century economy.”

Jeff Leake, the leader of Connecticut’s largest teachers’ union, celebrated the announcement that Biden has picked someone who understands the students.

“A proud product of Connecticut public schools, Cardona will bring his experiences and expertise to Washington, where he will work to address inequities in education to ensure a robust, racially and socially just system of public education that will seek equity and excellence for all students.” Leake said. “As an English learner in a public school classroom himself, he grasps the struggles of English learners and has a strong commitment to educational equity.

“He believes teachers need to have a seat at the table in order to develop well-informed education policy. He has always sought out diverse educator voices as experts and welcomed their experience and knowledge on many issues that impact educators and their students.”